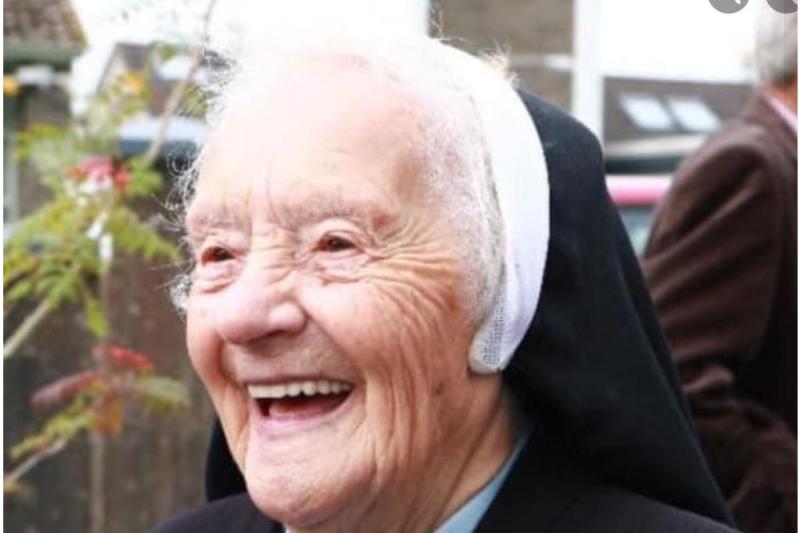 IT was truly the end of an era in the Rahan and Killina areas last week with the passing of Sr Oliver Wrafter, in her 100th year.

Sr Oliver was a person of generosity of spirit, determination, sense of purpose but above all kindness and humility.

She was the recipient of the Offaly Person of the Year award in 2006 for a lifetime of achievements on many different fronts including education, religious life, community involvement and local history studies.

In a tribute to the deceased Killina Presentation Resource Centre, which is located in the former convent, said “Sr Oliver was treasured by our entire parish and will be fondly remembered and renowned for the legacy she leaves behind.'

Offaly Historical and Archaeological Society, of which she was a committed member for many years, said “Sr Oliver will long be remembered in Killina, Rahan and Tullamore for her remarkable life full of kindness and generosity.”

“It was matched only by an enthusiasm to ensure that Killina schools would be a fit memorial to Maria O’Brien who founded the the Killina Convent and herself became a sister in what was the first post-Reformation convent in the diocese of Meath.”

The tribute added that “Sr Oliver carried on that tradition of absolute dedication from the time of her entry in the 1940s and persevered in ensuring that Killina’s claim for second level status would succeed and flourish.”

“She and her friend Sr Patrick Deegan were regular in their attendance at Offaly History lectures. In Killina she saw to the publication of several books on the parish of Rahan and ensured the collection of folk items attached to the school. This small museum was opened in the 1980s.”

Born in Dublin on February 5 1923, the then Ita Wrafter came to Tullamore in 1936 as a young girl following the death of her parents when she was just 13 years old.

Her father Joe took part in the famous Tullamore Incident in 1916, widely viewed as a prelude to the Easter Rising, something of which Sr Oliver was deeply proud.

She attended the Sacred Heart Secondary School and joined the Presentation Order in Killina in 1941, thus starting a lifetime of dedication to education and of service to the wider community in Rahan and beyond.

Sr Oliver trained as a primary teacher in Carysfort College and qualified in 1944.

For the next 34 years she taught at both primary and secondary level, carrying out the duties of principal at different stages, until her retirement as principal of Killina Secondary School in 1988.

Her teaching career encompassed the many great advances in education nationally, including the introduction of free secondary education.

However, the greatest challenge came in 1972 when the Department of Education announced its decision that Killina would no longer be allowed to prepare students for the Leaving Certificate as they had done since 1953.

The threat of closure was very real as a policy of centralisation was favoured at that time.

Over the next five years, Sr Oliver along with Sr Patrick, led a number of deputations to the Department of Education lobbying to have the decision reversed.

Their perseverance and commitment to education was successful when the Leaving Certificate was restored and secondary status was conferred on the school in 1977.

The triumph demanded personal sacrifice too, as Sr Oliver returned to college and qualified for an arts degree, followed by the Higher Diploma in Education in 1977.

Sr Oliver was always fully involved in all aspects of school life and provided opportunities for the holistic development of the students. In addition to ensuring the academic and spiritual training of pupils she accompanied students on school tours throughout continental Europe and encouraged young people to become involved in sports, music and other activities.

After her retirement, Sr Oliver continued her involvement in the secondary school for many years through her work on the Board of Management.

Away from the classroom, Sr Oliver made a huge contribution to the locality through her work as sacristan in Killina parish church for over 30 years, her lifelong commitment to the Pioneer Movement, her association with the Nano Nagle Guild of the ICA and her promotion of the work of the St Joseph's Young Priests Society.

Her remains reposed in the Convent Chapel in Killina on Wednesday evening followed by removal to St Carthage's Church, Killina.

Burial was on Thursday in the church grounds following the celebration of Requiem Mass.,

Deepest sympathy is extended to the Presentation Sisters, her loving cousins Conor, Carmel, Alec, Peter, Adrian and Ben, their spouses and families, relatives and a wide circle of friends.