Offaly parish priest has happy memories of a rural childhood 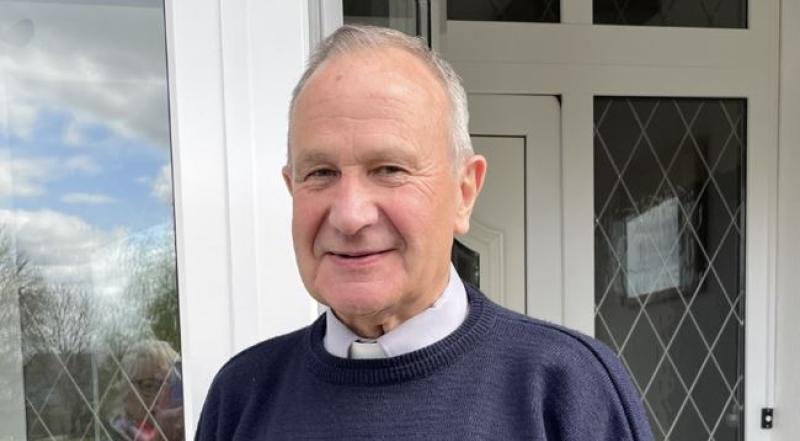 I was born in Vicarstown, Co. Laois, where my parents lived on a small farm.

I was their first-born child. I have eight living brothers; another brother and my only sister, both died at birth. I went to National School in Vicarstown, two miles from home, to which we walked most of the time and then on to the C.B.S. in Athy, 9½ miles from home, cycling there six days each week.

From there I went to Knockbeg College near Carlow where I did my Leaving Cert examination. During my final year there, I contacted the Bishop’s Office, indicating my interest in studying for the priesthood. After a few interviews, and when my examination results came out, I was accepted to study and offered a place in the Irish College in Rome, where I spent six happy years. I was ordained in my home parish church in Vicarstown

Since then, I have worked in the diocese of Kildare and Leighlin in a number of parishes mainly in Co. Kildare, before being appointed to Killeigh from 1st March, 2000.

The house into which I was born was built 101 years earlier by my grandfather's grandfather. Very little had changed in how people lived in that house in the previous 101 years. I remember as a child an open fire with a massive open chimney, the steel 'crane' which was hinged on the right-hand side.

The crane swung in over the fire or back out over the flagstone floor, enabling the hanging of pots for the boiling of water for potatoes, vegetables and meats, or baking bread. I recall a kind of shelf on each side of the fireplace called the hob, where people often sat to warm themselves or where the lighting coals or sticks from the fire, were sometimes assembled to keep a pot or teapot warm or to heat the brick insert for the clothes iron. (One brick was heating when the other was being used in the iron). It all came to a sudden end one evening when a "Wellstood Cooker" with attached hot water tank was installed. The open chimney was now covered in. That ended a lot of draughts in the house. It was the first effort at heat insulation!

Every day at least two buckets of water were drawn from the well near the house. It was a spring well, with water surging out of the earth and flowing away as a river. On a warm summer's day when we came in from thinning beet or turnips or from saving hay or peas, or from picking strawberries, that well-water was beautifully cold, fresh, clean and wholesome.

We had light in the house and around the yard from paraffin oil lamps. These lamps gave an orange hue in the house, more are less like a 20-watt electric bulb. Going upstairs at night time meant bringing a candle with you. In many cases the candle was set in a jam-jar filled with sand for reasons of safety. The atmosphere of low lighting from open fires, candles and oil-lamps, was an atmosphere where ghosts and the 'ban-shee' easily lived.

All of this changed with the arrival of rural electrification in 1959. I can remember in the autumn of that year when long straight creosoted timber poles were drawn to the pre assigned spots by horses. Then it took a strong young man to dig a hole, approximately six foot deep, into which, the pole was set.

I remember so well the house being wired for the first time. As a 10-year-old boy, I was sent up into the attic to help bring wires from one spot to another where a light was to hang or where wires were dropped for a switch or for a plug. Was I the first person into that roof space in 110 years I wonder?

I also recall so vividly the 'Switch on Night'. Besides the apparent flood of light from one 100-watt bulb in the middle of the kitchen/living room, two important electrical gadgets were put to immediate use; firstly, in the farmyard where an infra-red lamp came in very handy when a sow had just given birth to a litter of piglets. Secondly, inside the house, a washing machine with mechanical clothes wringer attached was put to immediate use. That ended one form of drudgery for women which had remained unchanged for hundreds of years namely, the scrubbing of clothes on a washboard. When electricity arrived, we were able to plan to bring running water directly to the kitchen.

I remember horses yoked to carts and pulling a roller around a field of grass, pulling harrows and pulling the plough. One of my earliest memories when I was about four years old, following my father as he ploughed a field. The crows were very busy searching for worms in the freshly turned clay, rising in front of the horses and landing at Dad's heels. It was then that he taught me this little rhyme; -

God made man, man made money.

God made the bees, and the bees made honey.

God made the big man to plough and sow.

God made the little man to hunt away the crow.

I was of course the little man!!

I remember the first tractor coming around the place, a Fordson. It was often referred to as the iron horse, because it did the same work and dragged the same implements as the horses had done for hundreds of years. Threshing day, and the first combined harvesters, drawn by a tractor. That ended the days of the threshing machine when nine or ten men from the neighborhood gathered to work as a team, going from farmyard to farmyard for a few weeks every autumn.

Going to Mass was in a pony and trap with my grandmother. Mass was said totally in Latin, except for the sermon. The priest faced the altar which always faced the rising sun. People had a rosary bead in hand or a prayer book. When I received my First Holy Communion at the age of seven years, we were required to fast from all food and drink, including water, from midnight. No wonder people fainted at Mass! I did not ever serve Mass.

Our first motorcar was a second-hand Ford Prefect, which was a great relief to my mother who had been driving in her own home since the age of eighteen.

There was a radio with dry and wet batteries at home for as long as I can remember, but programmes were only transmitted for a few hours in the morning, around lunch time and again at night. I was a pupil in the CBS school in Athy when TV was first broadcast in Ireland on the 31st December 1961. We had a black and white picture for up to ten years, before the arrival of a colour screen.

All of the above shows that since birth I have lived with and through many forms of change. The world and the society in which I grew up was very closed, very intolerant of difference and suspicious of outsiders. I’m glad to have lived through the change from intolerance to tolerance; and from tolerance to appreciation of, respect for, and celebration of all people who live in our land. Through travelling and multimedia, we have in fact grown to appreciate and respect people throughout the whole world.

I love to retreat to my 174-year-old home to relax, refresh and rebuild my spirit. I have found fulfillment and happiness in my life as a priest in our diocese of Kildare and Leighlin.

I wish every success to the Killeigh Community Centre Development Association. This project will be a wonderful enrichment of the community.

Killeigh Community Centre Development Association needs your support! If you would like to be in with a chance of winning a fantastic new three-bedroom house in Enfield valued at €355,000 or €300,000 cash and support our fundraising efforts, please visit www.winahouseinmeath.com