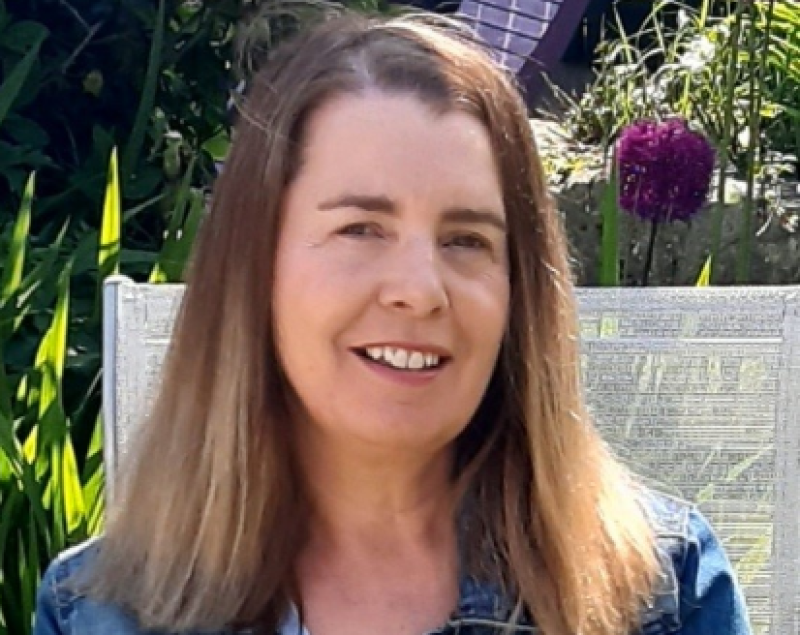 I am the eldest of four children, two sisters, Bernie and Irene and one brother Seamus from Loughclose. I am married to David and we have two children, Ciara and Niall.

Both my parents are from the Killeigh area, my mother Marie Molloy from Gurteen and my father Jimmy O’Rourke from Ballinasragh. My parents spent many years dancing in the carnival that brought many a famous showband to the village.

My siblings would say I was bossy, which probably has a ring of truth to it, I wanted to be a guard or horse groom when I grew up. Our house was a busy spot, we had every sort of animal, pigs, dogs, sheep, ponies, myself and my siblings taught ourselves to horse ride on a stubborn but lovable pony called Brandy that my youngest sister got from Santy one year.

Santy actually visited our house twice one year, I had got a doll for Christmas but someone sat on it on Christmas night at my Aunt and Uncle’s annual Christmas party, the poor doll's leg was all crushed so on St. Stephen's Day who arrived at the door only Santy with a brand new doll for me and smaller presents for my siblings. Unknowingly to me my father had got in touch with the North Pole via Patsy Walsh RIP and his brother Gerry. Patsy and Gerry had a Christmas toy shop over their grocery store opposite the church, many a child got presents from their shop. I was only seven or eight at the time and I remember it as clearly as it was yesterday, I will never forget their kindness and generosity.

Loughclose that time had many children around my age. During the summer a gang of us would gather and collect all the glass mineral and milk bottles and head down to Spollen's or Walsh’s shop to exchange them for money which we would spend straight away on sweets. We would then head off for a day of adventure across the fields. Paradise island in Kearney’s field was a favourite, in truth it really only was a mound of grass in the middle of a pond, but we had some fun.

I went to Killeigh National School, now the GAA club house which also had classrooms in prefabricated buildings in the yard along with the lunch room. My mother has told me that when she came to collect me after my first day in school I refused to go home and sat in the ditch as I wanted to wait until 3pm with all the other children, I don’t think this was repeated too often. Every Christmas we would be marched down from the school to the Macra hall for a day of nativity plays and Christmas shows, I remember one year I played Mary in the school nativity and was pulled out across the stage on a wooden donkey.

Growing up old customs and beliefs were a big deal in our house, the May Bush was always put up on the first of May and kept up for the month. We would tie bunches of primroses and cowslips on it along with eggshells and ribbons made from scraps of material. Next up was Halloween, we didn’t go trick or treating as kids but we did play the old traditional games such as snap apple, apple bobbing and blind man’s buff and we always liked to give ourselves a good scare with a good ghost story. I remember my grandfather telling me about the time that he saw the banshee combing her hair sitting on a nearby neighbours wall, or the time my father seen the ghost of the Irish wolfhound in the Lord's Lane or my mother saw Will-o’-the wisp across the bog. On St. Stephen’s Day we would always go hunting the wren calling to neighbours houses, we were all beginner tin whistle players and sure if we only knew one or two tunes it didn’t matter as that was all you needed for each house.

My father was sports mad, especially GAA, athletics, cycling, boxing, anything really and I am the same, I love sport but especially hurling. Growing up if we showed an interest in any sport we were encouraged to get involved, I played camogie, threw javelin, shot put, and even the high jump. We had our own high jump with a not too soft of a landing on fertiliser bags filled with turf mould and hurdles in our front garden. Every Saturday morning a bus load of children gathered in front of the church to head over to Clara swimming pool for swimming lessons. I took part in art competitions for the parish community games and attended Irish dancing classes in the Macra hall. I ran cross country with Clodiagh Valley Athletics club and many a winter’s night was spent running around the village green. The 1981 All-Ireland Cross Country finals were held in Loughclose, I was delighted that day not from running but the fact that I got Eamonn Coghlan’s father’s autograph.

August Monday Sports was a big event in our house, if the turf was home and in the shed even better, we could enjoy it all the more. Held in the GAA field, we had races, and matches, swinging boats, roulette wheel, wheel of fortune and the hawker’s stalls selling us everything shiny and plastic. It was one of the best days of the year as we had a chance to meet up with friends and family before the summer came to an end.

I was a member of the local Macra Na Feirme branch in the late 1980’s and we held meetings every week in the supper room in the Macra Hall. Macra and the hall were thriving during those years. We took part in amateur dramatics, badminton, basketball, and discos were held there. We took part in competitions competing against other Macra clubs in the county.

Killeigh village and parish is a wonderful community and I am very proud of it. The enthusiasm from all the volunteers in the various clubs is fantastic. We have numerous sports clubs and organisations all working together to give all the people of Killeigh young and old a chance to meet up and socialise. The only thing missing from the village is a centre that belongs to all the community, no matter your interests that we can all share together, that is one of the reasons I became a committee member of the Killeigh Community Centre Development Association in the hope that one day soon as a community we can make this happen.

If you would like to learn more about the development of the proposed Killeigh Community Centre and how you may be able to assist please visit our website www.killeighcommunitycentre.com