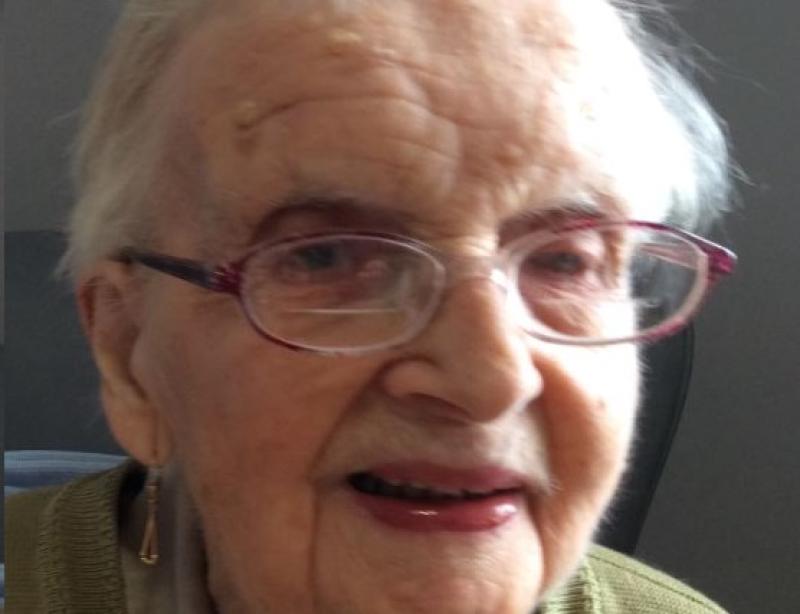 TULLAMORE was saddened by the recent passing of Maura Kilcline of the Arden Road.

Originally from Roscommon, Maura moved to Tullamore in 1963, and from then on was always a

familiar face in the community. She worked as a nurse in Tullamore Hospital for many years, and was also involved in organisations such as Meals on Wheels, the Irish Countrywomen's Association, and the Tullamore Gramophone Society.

Born to a farming family in 1926, Maura was one of ten children, two of whom died as babies. While in secondary school, she did a course in first aid, and this led to her lifelong career in nursing.

After leaving school in 1944, Maura went to Manchester to train as a nurse. This was, of course, during the war, and she witnessed first-hand the devastation that war brought to so many people. To her, that was what made the job worthwhile.

In 1949, when her father became ill, Maura returned to Roscommon and got a job in the Sacred Heart Hospital. This was the county home, and as such, it was viewed as a place of stigma by some people - but not by Maura. While there, she cared for many people who were socially excluded, ranging from people with TB (the pandemic of the time) to unmarried mothers and their children. Again, that was what made her job worthwhile.

In 1959, when she married her husband Herbert, she had to leave the job, as was the rule at that time. However, when this rule was lifted in the 1970s, she got a job in Tullamore Hospital, where she worked until her retirement. She spent much of this time on the geriatric ward, reflecting her lifelong commitment to caring for the vulnerable.

Everyone has their cross to bear, and Maura's life was not without tragedy. As a young child, she saw her baby brother Willie die of whooping cough, and in her 30s, her only sister Kay died in a car crash. The hardest knock, however, came in her 70s, when her son Niall was left in a coma following an injury, and lay in a vegetative state for six years until his death. But despite all of this, Maura remained cheerful, upbeat and positive, determined to let nothing get her down.

Those who worked with Maura remember her as a warm, kind and compassionate nurse who always put people first. But she was also a person of principle and was not afraid to call out nurses who fell short of the standards expected of their profession.

In theory Maura retired in 1986, but in reality she never retired. While her son Niall was in a coma, she visited the hospital three times a day, checking his chart, and talking to him in the unfailing belief that he could hear her. She never missed a day, not even Christmas Day.

Later, in her 80s, she looked after her ailing husband Herbert at home, until a back injury forced her to stop. Later still, she minded her son Des while he was recovering from a knee injury.

Even in her 90s, when she was in a nursing home, Maura continued to care for people. Indeed, as one staff member put it, “She was nursing us as much as we were nursing her”. She would regularly say to them: “Don't stand for too long, you'll damage your back”, or “You're working too hard, you need to take a break”.

Maura was also keenly aware of the needs of the other residents. She would call over a staff member to say: “That man has the sun in his eyes, could you give him a sun hat?” or “That woman's arm is drooping, could you put a pillow under it?”

Maura never retired. She was a nurse until the day she died.

Maura passed away peacefully on November 6 and was laid to rest on November 10. She is survived by her sons Des, Herbert and Peter, her daughter Carmel, her grandchildren Kieran, Anna and Mari, her brothers Luke and Larry, and her many relatives and friends.