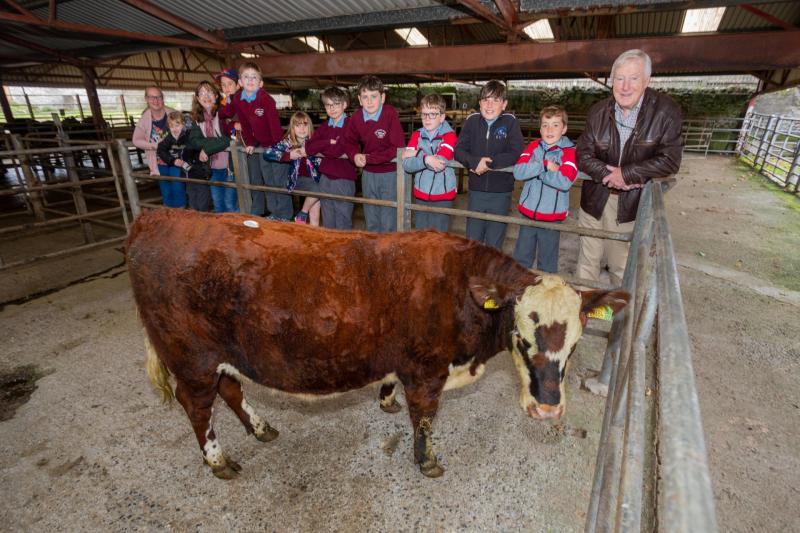 One of the most inspiring responses to the Lions Clubs Hooves 4 Hospice fundraising appeal came from the pupils and teachers of a small primary school in County Offaly. St. Kieran's NS, Broughall is located on the outskirts of Kilcormac.

Pupils benefit massively from the low pupil-teacher ratio which exists in the school. Three full-time teachers afford the pupils the opportunity to engage with all elements of the curriculum as well as engaging in various different exciting initiatives and projects.

School Principal, Helena Dunne, explained why the school decided to participate in the Hooves 4 Hospice project. “Broughall is a rural community which has lost many of its loved ones to cancer. We felt that the efforts to build a hospice facility in the midlands region is something our school wanted to add our support to. ‘Hooves 4 Hospice' was the perfect opportunity for us to do something which would honour the memories of all those people in Broughall who lost their lives from cancer as well as being able to help in a practical way to put a much-needed hospice facility in the midlands region.

“In March 2019 we were in the process of organising a family-sponsored walk-in Boora. We thought that this was a nice way to bring people from the school community and the local community together and raise money for a good cause, at the same time. When the restrictions came in, our fundraiser was put aside but not forgotten. When we returned to school in September, we did have to scale back our fundraiser a bit, so we held a fancy dress, farmer sponsored, walk within the school grounds. We raised enough money from the walk to purchase a calf and an extra €1244 euros which we were in a position to donate directly to the Hooves 4 Hospice fundraiser. Michael Carroll, the Chairperson of our Board of Management, is a beef farmer and he offered to host and rear the calf we bought on his farm”.

The fundraiser was brought to a very successful conclusion at Birr Mart recently when the animal, generously reared by Michael Carroll, was sold for €1,030. Teachers and pupils from the school attended the mart and were impressed by the keen interest there was in the animal and the fine price the sale realised. Pat Lalor, Chairperson of the Hooves 4 Hospice project expressed his gratitude and appreciation to the entire Broughall School community for their support of the project. He thanked the school for their very generous €2,274 financial contribution to the Hooves 4 Hospice project.

Ms Dunne said: ”The whole project has been a hugely positive experience for our pupils, staff and wider school community. We, as a community, have been devastated by the negative effects of cancer, so it was wonderful to be part of a project where we can help people who are affected by this awful illness. Our school is all about providing for our children's future. In the future we want to see a state of the art hospice facility which people from our community can access. To be part of a project which makes this facility a reality was simply a no brainer for us”.