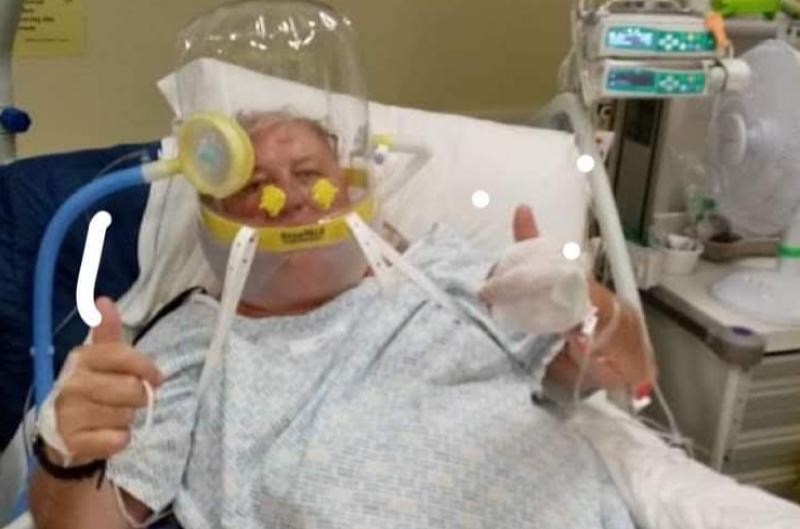 A MUCKLAGH resident who spent 25 days in intensive care battling Covid-19 has urged people to get vaccinated.

Nicky Keogh contracted Covid in mid-August, despite having received two doses of the Pfizer vaccine, and received treatment for over a month in the Midland Regional Hospital, Tullamore.

But, speaking to the Tribune last week, Nicky stressed if he had been unvaccinated he would have died from the virus and transmitted it to his family and friends.

He condemned anti-vaccine campaigners who he said were spreading false information and targetting vulnerable people.

Nicky paid tribute to the doctors, nurses and staff at Tullamore hospital for what he termed the “fantastic” treatment he received.

“All the staff dealing with the virus were very thorough and professional in their work,” he stressed.

“The commitment of the staff in the hospital, particularly in the intensive care unit, was phenomenal.”

He also praised his GP, Tullamore based Dr Frank Fahey for his ongoing care and advice.

Retired since 2010, the Mullingar native, who is in his late 60s, worked as the fire prevention and safety manager with the Health Service Executive in Tullamore and prior to that with Offaly County Council.

He is also a past national President of the trade union Impact.

Affable and outgoing, Nicky said he does not know how he contracted the virus as he kept socialising to a minimum and observed all the Covid guidelines.

“I don't know where I picked it up as I wasn't socialising or meeting people and only went out to the shops and supermarkets.”

Though feeling unwell he said he did not have symptoms such as the loss of smell and taste.

On the advice of his son he took the Covid test in the vaccination centre in Tullamore.

But the following day, Wednesday, August 18 last, before his test results were returned, he attended the accident and emergency department at Tullamore hospital following directions from his GP.

When he arrived at the hospital, he was unable to walk from the car to the accident and emergency department and had to be brought in a wheelchair.

He was immediately tested and the result was positive.

He said the virus attacks organs in the body such as the kidneys and lungs and any part of the system that is weak.

“My advice to anyone who feels unwell and has coughs and pains is to get tested,” Nicky advised.

Transferred to the intensive care unit he was placed in a hood and received constant one-on-one nursing and consultant care for a total of 25 days.

The ordeal was very physically and mentally challenging said Nicky who was isolated from other patients in ICU.

His oxygen levels were extremely low and he found breathing extremely difficult.

“I remember in the first few days I looked up at the crucifix in ICU and said Lord if you are going to take me I'm ready to go but if you're not let me go back for another while.”

He was encased in a hood for the first three weeks in ICU and after that wore a mask and received oxygen through his nostrils via a tube.

“If the anti-vaccine campaigners saw what goes on in ICU they would change their minds,” stressed Nicky.

He was released from hospital on Monday, September 20 last and is making a steady but slow recovery.

Recuperating at his home in Mucklagh, Nicky finds it difficult to move around the house and requires regular oxygen boosts.

“It'll be a while before I'm out and about again,” he admitted.

Nicky stressed the importance of everyone receiving the vaccine and getting tested if feeling unwell.

He said if he hadn't been vaccinated the virus would have killed him.

And he added that being vaccinated meant he did not transmit the virus to his family, friends and those he came into contact with.

“All my family and close contacts were tested and they were all negative,” outlined Nicky.

Now enjoying a new lease of life, Nicky expects it will be at least a month before he returns to normal.

But he is looking to fully engaging in society and socialising with family and friends in the not too distant future.