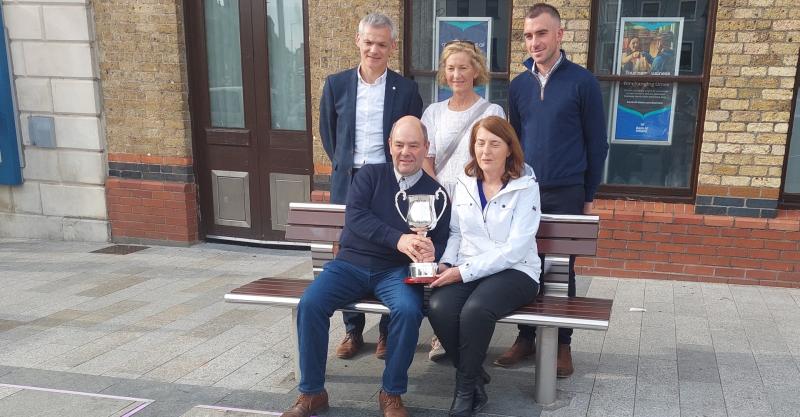 THE parents of murdered Offaly school teacher, Ashling Murphy have endorsed a new 4 mile road race that will be run in her memory..

A teacher at Durrow National School, Ashling was killed when she was attacked while jogging after work along the Grand Canal near Tullamore on January 12 this year.

Her shocking death resulted in an international outpouring of grief with vigils held all over Ireland and much further afield. Just 23 years of age, her murder touched the hearts of so many people.

Offaly Athletics have now organised a big road race in her memory. The Ashling Murphy 4 miler will take place in Tullamore on Sunday, May 22 at 11am, starting and finishing in Tullamore Town Centre. The Ashling Murphy Perpetual Trophy will be presented to the first lady finisher and the event is likely to attract competitive and fun runners from all over the country.

From Cully, Blueball, Ashling was a very talented musician and also played camogie with her local Kilcormac-Killoughey Camogie Club.

Her parents Ray and Kathleen and first cousin Fergal Leonard attended a launch of the four mile race last Friday, where they revealed that a registered charity is also being set up in their daughter's name.

Ray Murphy told the “Tribune” last Friday that they were glad to give the race their approval when Fergal Leonard, a nephew of Kathleen, told them of the plans.

A member of Tullamore Harriers and a good competitive runner himself, Fergal Leonard remarked: “A lot of people throughout Offaly and in the wider running community had felt that they wanted to pay some respect to Ashling and this was their way of doing it. They will be putting money back to whatever you (Ray and Kathleen Murphy) decide you want it to go towards. Everyone is looking to give back a little bit and this is their way. Due to circumstances, Ashling was killed while out running and it is their way of marking her last run.”

Ray Murphy outlined that they are in the process of setting up the Ashling Murphy Memorial Charity. With the help of their accountant, John Lynch, they have got the charity set up properly through the Charities Regulator and an account is being set up in the Bank of Ireland.

A committee is being set up to run the charity and Ray stated that the Durrow school and Ballyboy were two “very special places” for Ashling. She loved teaching Irish music in Dan and Molly's in Ballyboy and setting up something there in conjunction with Comhaltas and at Durrow is among their plans for the charity.

Kathleen Murphy revealed that they have given some money to Womens' Aid, the Irish national organisation that have been working to stopping violence against women, and they may give more.

Ray said: “Ashling never had any reason to be afraid before this and we knew nothing about domestic violence or anything like that or violence against women. This is the only violent thing to ever happen us and a lot of other women out there had violence against them in different ways. We can go on and do something about that, Ashling never got that chance.”

Kathleen remarked: “It was just a random attacker, it could be one in a million.”

Music will form a big part of the 4 mile race with a festial of music rganised around it. Ashling was an excellent young musician herself while Ray Murphy was well known as a member of a very popular local band, Best Foot Forward. Friends of his and Ashling's and musicians from the wider Comhaltas, Irish music community will perform during and after the race on a stage in O'Connor Square that is being erected by a local man Aidan Shortall.

There will also be a warm up to music before the race. Ray and the band had more or less retired before Ashling's death but he has played on a few occasions, including with band members, since. He might play on the day of the race though he also wants to help out with the smooth running of the event. A keen motor cyclist, he is enlisting the help of fellow members of Camcor Riders to help steward the race – Camcor Riders are a Birr based group of midlands motorcycle enthusiasts who raise money for local charity causes by organising charity motorcyle runs.

Ray stated that some of the bikes are very rare and spectacular and wouldn't usually be seen around the midlands – big powerful bikes that are an attraction in their own right and will add to the atmosphere on the day.

Darren Butler and Mary Daly, chairman and competitions secretary of Offaly Athletics outlined details of the race. It will be a fast route, designed for fast times, taking runners on a circuit around the old Burlington, by the Railway Station and back into the town centre. There are prizes for 1st, 2nd and 3rd finishers along with category prizes for over 40s, 45s, 50s, 60s and 70s male and female.

The races incorporates the Offaly Novice, Senior and Masters Road Race Championships while it is also part of the Offaly Endurance Race Series – it is the first of four races and will be followed by the Jack Cox 10k in Kilcormac on June 19, the Edenderry 10 mile race on July 10 and the Tullamore Harriers half marathon on August 27.

There will be individual prizes at each race and it will end with overall champions being crowned – finishing positions in each race count towards the overall prizes.

The entry fee is 15 euros and a portion of the proceeds will go to the Ashling Murphy Memorial Charity. Entries can be made on popupraces.ie.