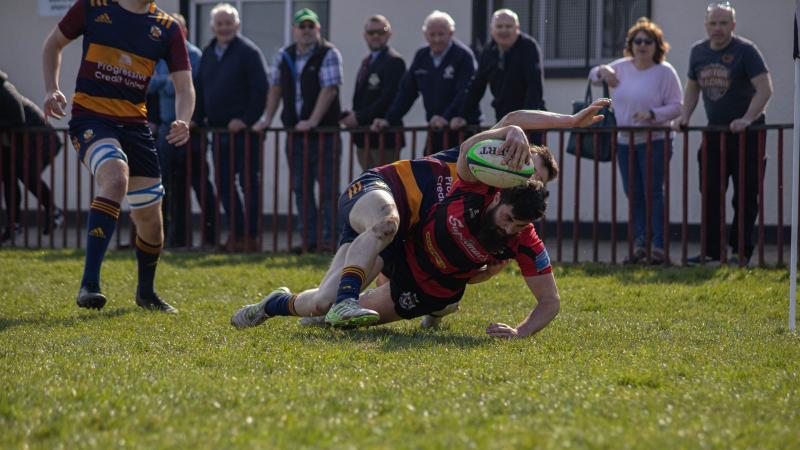 Tullamore gave a valiant display on Saturday to beat a hotly tipped Skerries side,  cementing their place in the play off places. Skerries were sitting in second place before the encounter while Tullamore were in fourth. Tullamore knew that a win in their final three games would secure their position and have been in excellent form at home to this point.

Skerries hit the ground running initially, and enjoyed the majority of possession and territory. The visitors found themselves deep in the Tullamore 22 metre line and piled on the pressure.

The Skerries outhalf threw a  speculative long pass that was cooly intercepted by Brian Geraghty, Geraghty flung the ball to Karl Dunne who released Liam Farrell down the wing. The side then worked the ball to the otherside of the field, and Craig Strong made a break to bring the team to the opposition 22. Strong then offloaded the ball to Sean McCabe, who barrelled his way over the defending full back to score a brilliant try. Conor Dunne nailed the conversion from the corner to make it 7-0 after 15 minutes.

Skerries bounced back with a well taken penalty of their own soon after. From the restart Strong knocked the ball long and deep. The Skerries winger gathered and carried the ball to the edge of the pitch. When the ball was moved infield, The Skerries number 8 ran straight at Matthew Murphy. Murphy expertly ripped the ball out of the 8's hands and strolled under the posts for an excellent individual effort. Dunne slotted the extras to stretch the gap to 11 points. The aggression and line speed of the Tullamore defence was notable, and the visitors struggled to cope with the pressure. Tulliers forced 2 kickable penalties in the last 5 minutes of the half, to which Conor Dunne slotted. The half time score was 20-3 to Tullamore.

The second half told a different story to that of the first. Skerries hit a purple patch for the next twenty minutes and scored 2 converted tries. Tullamore responded with a penalty of their own, but the men in red and black had to hold tight for the last 10 minutes. Matthew Murphy, Cathal Feighery, Cathal Behan and Conor Kelly all made notable tackles in this period to keep the Dubliners at bay. Skerries were camped on the Tullamore line for the final exchanges of the game. The Tullamore defence remained resolute and managed to grind out a well earned win. Matthew Murphy was awarded the man of the match award for his brilliant defence, and for his dominant carries in attack.

The team will now face Omagh this Saturday (2nd of April) at 2.30 at home. We would also like to wish Sean McCabe, Matthew Murphy and Christopher Whittle a speedy recovery with their various injuries sustained over the weekend.