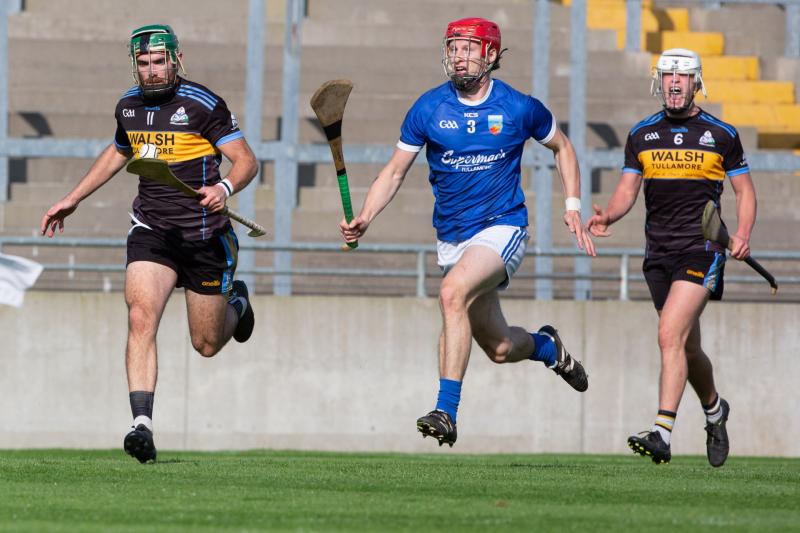 WHILE hurling may be the preferred sport in Clodiagh Gaels, they have been a competitive dual club in the past few years.

Title charges on two fronts creates challenges for all dual clubs but it also helps generate momentum and great spirit in a squad of players. Shane Dolan has been in the unique position of being captain of both their intermediate footballers and senior “B” hurlers this year.

They were well beaten by parish rivals Raheen in the intermediate football semi-final and are now in the final stages of preparation for Saturday's Senior “B” Hurling Championship final against town neighbours Tullamore.

A former Offaly minor footballer, Dolan was just a few months overage as Na Fianna had great success, winning U-16 and Minor Hurling Championship titles in the 2000s and he took time out last week to speak about their year.

You are where you wanted to be, getting to the final would have been the target at the start of the year?

“100%, we got to the final of the league as well and we were actually playing Tullamore as well but at the start of the year, championship was the big one, where we wanted to be. For the past few years we have been kind of knocking around, but this year we need to drive it on and hopefully we'll get over the line this time. “

When were you relegated from senior?

I didn't play that year would you believe. I took a year out of hurling and that was four years ago, when the championship was restructured. We were unlucky in the year that two teams were going up to senior we lost the semi-final to Kinnitty.

There is a very different feel to this year around Covid and it seems more normal?

“Yeah, we could train and we couldn't train and lads were a bit more iffy about training. This year we had a slow start and we got it hard at the start of the year. We thought we were going well in training and a few lads pick up knocks in training and you had Covid, you had close contacts and you were missing players and missing training and stuff like that but overall this year it has been easier to get back into it moreso than last year. It has been a lot different with Covid but it is good to see it coming to an end in a way as well.”

What do you think of the split season, playing final this late in the season is not ideal?

“I know with the weather and pitches, it is not ideal time to be playing any sport but it is still a privilege to be in a final so you can hardly be complaining. We will go out there and give it a shot anyway. At the end of the day whoever wants it more is going to win, this time of the year especially, the hard work on the pitch, tackling, closing down gets you over the line because you never know what way the weather is going to be. If you work hard it helps moreso at this time of the year than earlier in the year.”

How difficult is it to balance being a dual club?

“You can see the difference in the last few weeks of training when the footballers were knocked out, but it is hard. I'm a dual player and you could be training three of four nights a week. Lads get sick of it as well but it is a lot easier when the football is over. It is not ideal and a lot of lads here would be dual players. It is hard to get the balance right but we try our best to get it.”

Would you consider football or hurling to be your main game?

“It is 50-50. I enjoy both of them to be honest and it was a great honour to be captain of both of them this year. Unfortunately we couldn't get over the line in the football but hopefully we will put it right in the hurling. It will be an uphill battle against Tullamore. We have had a few battles with them already this year. We beat them in the league final but they caught us on the hop in the first round of the championship. We knew they were going to up it again from the league final so now it is a 50-50 game and whoever wants it more on the day, or takes their chances is going to win. I'm looking forward to it anyway.

It has been a mixed campaign by Clodiagh Gaels?

“We showed good character against Kilcormac. With 15 minutes to go we were six or seven points down and we showed good character to come back and claw back that deficit and the draw got us through luckily. The semi-final performance probably shows we deserve to be there. We really clicked against Lusmagh. We did go out of it for about 15 minutes in the second half but every team has their spells and I'm happy that in the last 15 minutes we showed great character again to get back on top when Lusmagh got it back to two points.”

Was their sense of crisis after K/K game?

“It's extra pressure when the expectations are that high. I was hearing fans saying we weren't performing to our potential this year but I think we are a young team as well and people don't realise that. In fairness I think I'm the third oldest player on the team but at the end of the day you can't keep saying every year we are a young team. Lads are getting a bit more experience and they are a great group of lads.”

“Liam (Langton) was out and a few lads were carrying knocks throughout the year but we've a big squad and lads that came in and they did step up to the plate. There were a few games we did mess up in but it wasn't down to missing players, it was more down to our performance as a team rather than players that were missing.”

In Liam you have one of the best forwards in Offaly but can't expect him to do everything?

“No and I think in fairness other lads did step up to the plate. Conor Langton is having a great year even the likes of Mark Dillon came in there for a few games but he's out injured. Dwayne (Dunne) has played fabulous, I think all the forwards are having a good year but I have to say as a team, that was our best performance of the year against Lusmagh and hopefully now against Tullamore we can try and get a performance like that again.”

How important is it to get up to senior hurling

“It is crucial, especially for the likes of these young lads coming through. These lads are good enough to be playing senior hurling but we need to get up there now. We can't be waiting every year thinking we'll get it next year or the year after that. It has to be now, this is a big chance for us now. For the likes of those lads coming through if they get up to senior, you never know the quicker you get up there you could stay up there and compete up there.”

How big of a help has Na Fianna's U-16 and minor hurling successes been?

“These lads have the experience of winning at that level so that goes to show that they are probably the leaders on this team. They have got that winning feeling. I know we won an intermediate about five years ago but that's a long time to go without winning a county medal in hurling so hopefully we can put that right.”

It's a local derby and you must know the Tullamore players well?

“They know us well and we know them well. We probably know each other's games inside out now. Whoever works harder on the day and takes their chances at crucial moments will win the game. I think we both have each other's games down to a T at this stage. With the weather and all that, you never know, we'll see what happens. We'd be friends with some of them off the field. I know some of the lads would be very close to some of them and I would be close to a few of them myself but that might make it a bit more sweeter if you win it.”