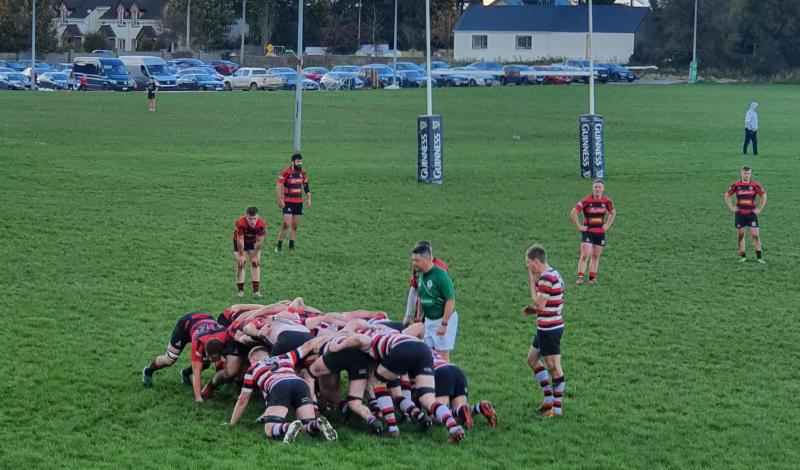 A scrum from Tullamore and Enniscorthy.

Tullamore gave an outstanding account of themselves at the weekend and led for large parts of the fixture, only to come unstuck by a try in the dying minutes of the game by Enniscorthy.

The visitors were top of the table with 15 out of a possible 15 points and racked up a staggering 43 point average in each game to date. Tullamore were in 4th position and were looking for redemption after a poor showing against Skerries in the previous round. Enniscorthy kicked off and hit the ground running with a try in the opening exchanges. Veteran out half Ivan Poole capitalised on the back of a missed obstruction to slide past the Tullamore defence to score the opening try of the match.

Tullamore were shell shocked, and had to feel their way back into the contest. Cathal Feighery returned to the starting line up this week and made an immediate impact with his pin point line out throws and dominant tackles. Tullamore found a purple patch and retained the ball through a number of phases. The visitors eventually infringed and conceded a penalty just outside their own 22. Karl Dunne opened his account for the day and split the posts to leave the score at 5-3.

From the resulting kick off, Tullamore won a scrum. The home side folded the visitors to win another penalty and opted to send the ball deep into opposition territory. Tullamore looked dangerous and probed with the ever present Matt Murphy, Christopher Whittle and Mark Kennedy. Tullamore were awarded with another penalty and Dunne duly converted. Tullamore were very much in ascendence at this point, and controlled the game in every facade. The forwards won primary possession time and time again while Conor Dunne and Lance Batten looked threatening every time they touched the ball in open play.

Tullamore could have had a sizeable lead at half time, but had a try disallowed for a forward pass. The back line ran a perfectly executed move, carving the defence open through slick handling from Craig Strong and sharp running lines by the Dunne brothers to set Sean McCabe tearing down the line. The final pass was unfortunately adjudged to be forward, but Karl Dunne nailed another penalty shortly after to leave the half time score at 9-5.

The second half turned out to be a bruising and attritional affair, with both teams putting their bodies on the line to gain a territorial edge. Karl Dunne maintained his 100% record and scored what turned out to be the final points for Tullamore on the 50th minute with the score at 12-5.

Enniscorthy found their voice and slowly forced themselves back into the contest. The visitors earned a penalty just before the water break, and Poole obliged with 3 points. Enniscorthy continued to whip the ball wide but the Tullamore defence held firm, with big tackles and steals from the menacing Barry Bracken and Ciaran Ennis. Enniscorthy eventually scored their second try of the game with 3 minutes remaining. Tullamore were narrow in defence and Enniscorthy exploited the space to put their left winger in for the crucial score. Ivan Poole kicked the conversion and Tullamore failed to score in the dying moments of the game.

It was a titanic battle and Tullamore can feel aggrieved not to come away with more here. The side still are still sitting in the top 4 after coming away with a losing bonus point. Tullamore travel to Cork city to play Sunday’s Well in Irish Independent park this Saturday with kick off at 2.30.