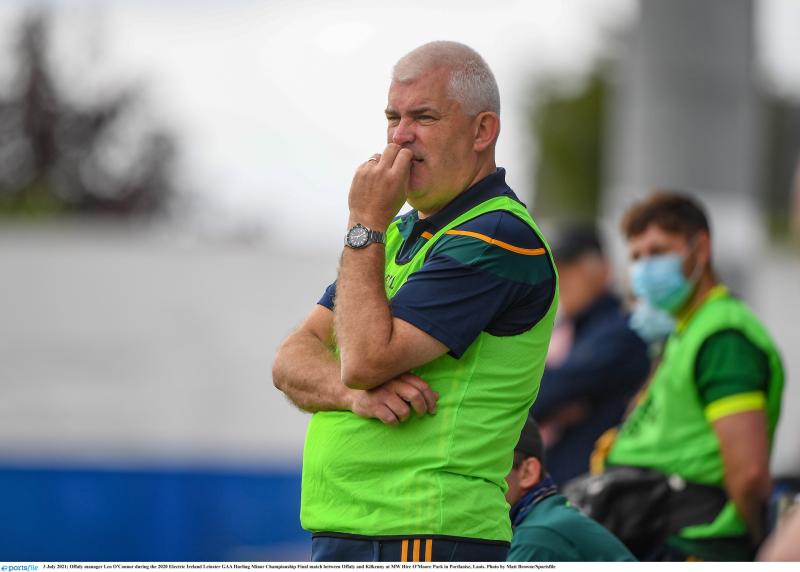 As Offaly walked off the field in the immediate aftermath of their 12-point defeat to Kilkenny last Saturday in Portlaoise, the big question in the minds of the supporters, and possibly even some players, would have been – is that as good as this team are?

Comfortable wins over Westmeath, Laois and Kildare proved that this was a very capable Offaly group, but Saturday was their first time to mix it with an established, traditional power of the underage county scene, and for the first 20 minutes in particular, it didn’t go well.

So did they hit their ceiling? Manager Leo O’Connor says no, that this was simply a lesson to his team about competing from the first whistle right through to the last.

“I think it was underperformance, we stood off them for the first 15 or 20 minutes and they really punished us, as Kilkenny teams do” was his assessment.

“But you’ve got to realise that two or three years ago, an Offaly team could have been beaten by 30 points in a match like that today.

“Today, we took the challenge to them, we worked hard and we stayed at it. There was another goal or two we could have got, there were other small little things, and when all the small things are added up, they matter.

“It’s a long time since Offaly were here. So when we get to these situations, it’s unfamiliar territory. The respect that this team has gained that they can go and push on to another level, and I think there is another level in them. As I said to the lads, this isn’t a backwards step, this is a sideways step where we have to learn from today, take it in, suck it up, learn the lessons and on we go.”

The final winning margin of nine points could possibly have been even less if Offaly had picked off points in some situations throughout the second half, instead of chasing goals when the chance wasn’t really on. But O’Connor was happy to see his players keep pursuing the miracle comeback, rather than tapping the ball over in a bid to add cosmetic value to the final score.

“We kept chasing it” he said.

“We had it down to eight points at one stage and such is life, small little things didn’t go our way, maybe a lad would be going through and the ball wouldn’t go to hand, the handpass was a little bit off, but if you get those chances, you need to be taking them against Kilkenny. We didn’t, hopefully the next time those players are in that situation, things will work out that bit better.”

So, less than 90 minutes after the throw in of a game that this group waited over half a year to play, their All-Ireland dream was over. Kilkenny were the team that had qualified to play Galway next Saturday evening, and O’Connor was happy to accept that this was fully-deserved, and that the long delay wasn’t a factor in how the game played out.

“In as much as we could do, we were ready for this, but it was the same for Kilkenny. We’re not looking for excuses, the better team won today and they’ll put up a big performance in the All-Ireland final next Saturday evening. It’s a learning process for us, we’ve really done well, we’re on an upward curve, and we’ll try to stay that way,” he concluded.