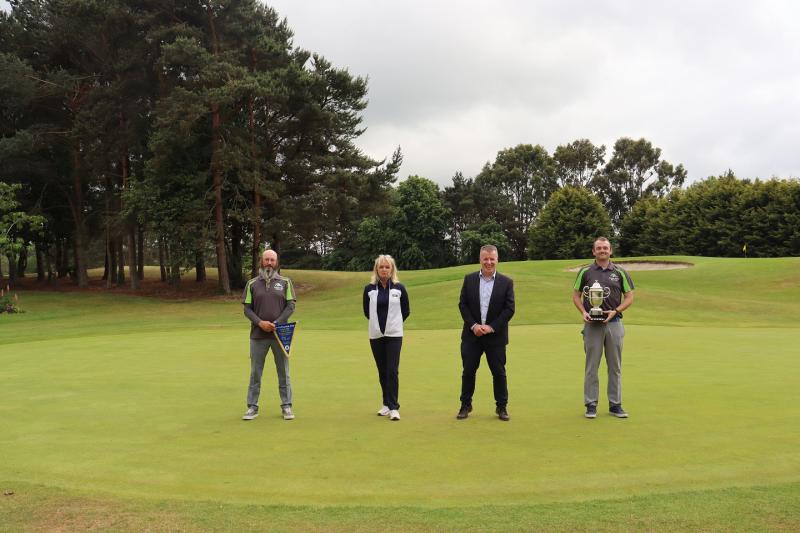 Offaly club Esker Hills won big as The National Council for the Blind of Ireland (NCBI) held the All-Ireland final of the HolmPatrick Cup and Granard Cup last weekend.

NCBI was delighted to go ahead with the rescheduled 2020 All Ireland Final of the HolmPatrick Cup and the Granard Cup competitions.

Now in its 90th year, men from 12 Golf Clubs from around Ireland competed to lift the HolmPatrick Cup and win a trip of a lifetime to St Andrews in Scotland.

Also competing on the day were ladies from 12 different Golf Clubs for the Granard Cup and a trip of a lifetime to St Andrew. Both competitions are the longest-running and largest charity golf tournament in Ireland.

Starting in 1932, it is named after Edina Conyngham, Baroness HolmPatrick, who donated the trophy to NCBI at its inauguration. The Baroness was a granddaughter of the Duke of Wellington. The tournament is a well-established highlight in the calendar of golf clubs around the country.

Chris White, NCBI CEO said; “This is the oldest golf charity tournament in the country with the fitting prize being to play on the oldest golf course in the world in St.Andrews, Scotland. We are delighted to continue to be the beneficiary and it is great to have the event back again after being postponed for an entire year due to Covid19. The funds raised today will assist NCBI continue to deliver frontline services to people living with sight loss. Thank you to all who participated this year.”

If you want to get your golf club involved in the 2022 tournament, please log onto www.ncbigranardcup.com or www.ncbiholmpatrickcup.com

Tribute after death of Offaly business and music giant