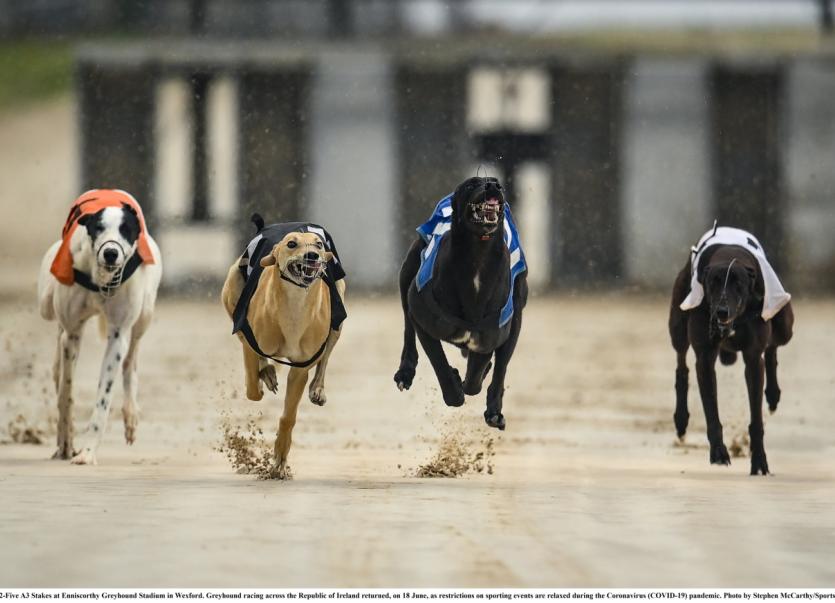 A bumper week for the faithful dogs with winners across the week. Some fine runs both by seasoned hounds and pups on debut.

In Enniscorthy, in the first round of the Elite Canine Genetics Unraced Stake, eleven heats, with a double for Peter Cronin and Owen Doyle. Agilis Georgie was fastest, in 29.02 (20 slow), by ten lengths for Doyle. Next fastest on the clock was Lisnakill Vernon in 29.03 (20 slow) by two lengths for Waterford trainer Declan Byrne.

Four Offaly winners in Mullingar. Optic Bandit won an A7 525 in 29.85 by one length for Edenderry owner/trainer David Hanlon. Belgard Queen won in the A8 grade for Margaret Bolton in 30.49 by two lengths. In an A4 contest, Ollys Mary won in a career best run of 29.66, by eight lengths, for Banagher owner Mary Moran. Our final winner on Monday was in an A3 grade when Gilbally Joe had the fastest run of the night, in a fast 29.2, by three lengths for Edenderry owners Oisin O’Grady and Timmy Ennis. All races in Mullingar were rated.50 slow.

Three more Offaly winners in Shelbourne, on Tuesday week. Margaret Bolton was back in the winners enclosure in an A5 race as Kilbride Dan won 29.15 by two lengths. Ballymac Akia also won an A5  but this time in 575 in 31.80 by nine lengths for Kinnitty owner Jeannette MacKenzie. The fastest run of the night was in an A3 contest. Amidus Luke won by three lengths in his first race in Shelbourne in a speedy 28.67, making it two wins from two starts for Cappincur owners Charlie and Justin Colgan. This fella looks a decent prospect.

Back to Enniscorthy, on Thursday, in the final of the April A3 sweepstake, Hillslot Tom (Zero Ten - Powerhouse Jean) won the €3k first prize in 28.88 (20 slow) by three lengths for Maria Byrne and J.J Connolly.

In Kilkenny, in the semi-finals of the Kilkenny Track Champion Open Unraced stake, Grangeview Mac made it three win from the first three rounds of this stake in 28.89 (20 slow) for Lorrha owner Michael Hogan by seven lengths. The other semi was only one hundred of a second slower as Droopys Yes won in 28.90 (20 slow) for John Linehan by three lengths.

In Shelbourne, in the final of the Islandbridge Open sprint, Deadly Big Show (Droopys Jet - Humble Star) won the €2k first prize in a fast 18.62 by two lengths for Mark O’Donovan. Surely the National Sprint in Dundalk for this fella now, however, expect the opposition to be much stronger with the likes of Offaly’s top tracker Brodys Magic taking his place in this valuable contest.

In Tralee, in the semi-finals of the Lee Strand Open 550, prolific winner Ballymac Rule had his ninth career win and is yet to be beaten for Liam Dowling, in 30.22 (20 slow), by five lengths. Slippy Kemp won the second semi in a messy affair in a slow 31.01 (20 slow) for John Geoghegan. Paddy McCormack’s two runners sadly exited the competition, both finding trouble in running.

In Clonmel, in the quarter-finals of the Larry O’Rourke National Produce stake, Good Cody went fastest when winning by one length, in a very fast 28.20, for Thurles owner John Kennedy. Another valuable stake to get underway was in Limerick, Greyhound and Petworld Golden Muzzle A1 550. Eight Heats, with Meduza going fastest for John Byrne,  in 29.69, by six lengths.

In Shelbourne Park, in the first round of the Sporting Press Irish Oaks, won last year by Ballymac Beanie and Declan Byrne. Seventy two of the countrys best bitches went to traps hoping to get through to the final with a chance to win the €30k first prize. All twelve heats were won in blistering times with Ballydoyle Rossa going fastest for Pio Barry in 28.17 by six lengths. One Offaly winner, in the fifth heat, Highview Secure won for Croghan trainer Gerry Merriman, by one length, in 28.65. Long way to go in this stake yet -  predicting the winner an impossible task.

Another four Offaly winners at the matinee in Mullingar. In an A4 race, Fahy Dream continued Paddy McCormack's good run when crossing the line in front of his competitors, by a head in 29.66, at 6/4 fav. In an A6 contest, Lethal Lacey won by five lengths, in 30.06, at 15/2 for Edenderry trainer Robert Sheehy. There was a good double for Ballycommon owner Peter Raine, in an A7 grade, Weather Snap won in 30.26 by one length. Our final winner of the week was Weather Blast who won an A3 race, by two lengths, in 29.62 after being well supported at the bookies and returning at a short even money. All races in Mullingar were rated .50 slow.

Friday, final of the Kilkenny Champion Open Unraced and final of the Lee Strand Open 550 in Tralee. Saturday, semi-finals of the Produce Stakes in Clonmel, quarter-finals of the Greyhound and Petworld Golden Muzzle in Limerick and second round of the Sporting Press Irish Oaks in Shelbourne.

A winner in any of the classics always deserves an accolade and Highview Secure winning in 28.65 in the first round of the Sporting Press Irish Oaks in Shelbourne on Saturday for Gerry Merriman gets the vote this time for dog of the week.

There were twelve  Offaly winners this week. Congratulations to all involved.