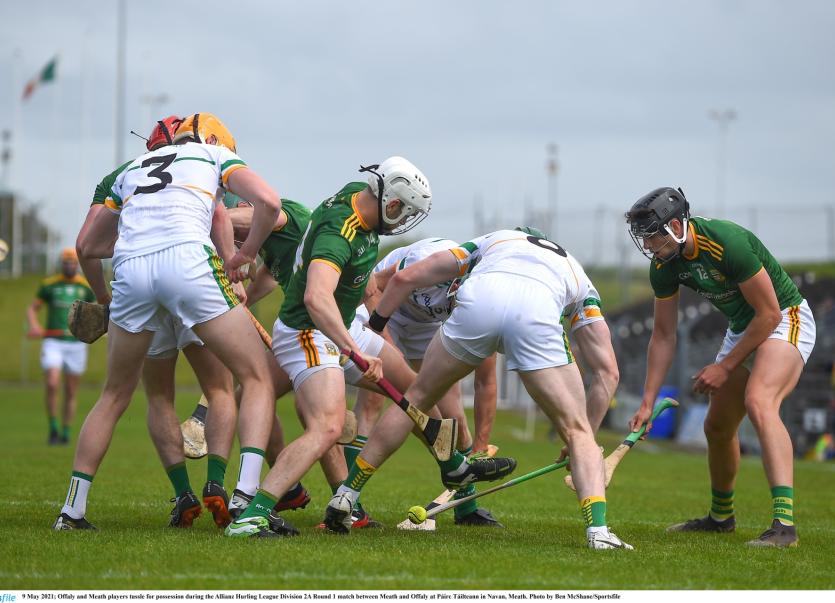 A ruck from Offaly and Meath last Sunday.

IT is not an option that would be taken lightly but there is a strong case for the Offaly GAA County Board taking the nuclear option and abandoning the outstanding underage championships from 2020.

It is a move that would go down like a lead balloon with the clubs remaining in these competitions and being fair to the players will be the guiding motives for all involved. However, pragmatism also has to come into play and the greater good must be the underlying principle – and it is no easy decision to decide what that is.

Covid-19 has played havoc with the Offaly GAA schedule and the long shut down in the early months of this year has exacerbated an already difficult situation.

Offaly really needed to have some of these championships completed by now. It is no fault of their own that they haven't but it leaves them with a very packed agenda for this year.

The U-20 Hurling Championship is also down to the final and again, that can be fitted in without difficulty. They must and will all be played.

U-20 football is a much different story. Just one round has been played in that and with quarter and semi-finals and a final to be played, that is far from a simple one to finish off. The Competitions Control Committee have warned clubs that they may have to play two games in a week to get this one finished.

At underage level, it is a lot more critical. The U-17 and 13 football championships are at semi-final stage, the U-15 football has a round of group games left before quarter-finals are played. Hurling is further advanced. U-15 is down to the semi-final stage and the U-17 A shield final has to be played.

The inter-county calendar has complicated things further for Offaly. Last year's Leinster Minor Hurling and Football Championship finals have yet to be played. Offaly will play Meath in minor football on June 30 and the hurlers will play Kilkenny in July 3.

The 2021 Leinster Minor and U-20 Championships will follow quickly after this. Leinster Council have come up with a fair solution by giving the 2020 finalists byes in these grades.

It means it will be into July at the earliest before Offaly can resume their underage club schedule and it could be much later if any of the teams progress.

While the U-13 can go ahead with comfort and dates have been fixed for these, the U-15, 17 and 20 championships are all held up while Offaly minors and U-20s are still in contention.

Young people have suffered a lot in the past year and a half. They have been out of school for extended periods, their source of fun and games has been removed from them and they have been told they can't meet friends or have parties etc. It is very challenging for them and taking away the 2020 championships from them would be very much a last resort.

It is one, however, that must be considered. The U-20 football represents a particularly troublesome one. Most of the competitors are group teams and their players are also eligible to play with their club adult teams. They are all back training now and some U-20 teams will either struggle to field teams or will put them out with scarcely any training. Of course, others will make the effort to prepare them properly, especially those with title prospects.

It is a very unusual situation and the challenge facing the Competitions Control Committee is how to finish the 2020 underage championships without drastically reducing the 2021 ones.

They have warned that the underage structures may have to be reviewed. It could result in the 2021 competitions having to be curtailed.

In the ideal world, Offaly will get both 2020 and 2021 championships completed. The 2020 championships mean a lot to the players and clubs involved. For some, they may not get too many more chances to win medals and it would be a shame to remove that opportunity from them.

The county teams have to take priority while they are in the championship and it leaves Offaly with an uncomfortably condensed calendar to get everything played.

We don't know what is around the corner in terms of future Covid-19 lockdowns. With vaccinations finally being rolled out in big numbers and hospital numbers declining, an end looks to be in sight. People can only deal with the reality of the moment and not worry about what might or might not be coming. Offaly GAA must prepare in the expectation that they will get a clean run and if things are different, then deal with it then and not before hand.

The localised lockdown for Offaly, Laois and Kildare is a big part of the reason that Offaly GAA finds itself in this difficulty. That was a highly questionable decision and without it, Offaly's 2020 calendar would have been nearly competed. The Senior, Senior “B”, Intermediate and U-20 hurling finals would have been completed as would some of the outstanding underage ones.

The loss of those two weeks played havoc in Offaly while it was also desperately unfortunate that the Leinster minor finals did not go ahead as fixed in early January. That would have allowed Offaly to get their programme going earlier but they can only play the hand they have been dealt.

Are the County Board better to wipe the slate clean and run very good championships in 2021 in the usual timely manner? Or are they better to try and play everything and satisfy the needs of every player, manager and club?

The latter one is of course the preference but the road may not be smooth. Unforseen circumstances – outside of Covid reasons – can delay championships and there will be postponements as allowed under the guidelines for deaths and other reasons. It is all uncomfortably tight and the margin for error is tiny.

There is a strong case to be made for both arguments and there is merit in taking the nuclear option and abandoning at least some of the outstanding 2020 championships. It won't happen, at least not at the moment, and in this situation, there is a responsibility on clubs and team mentors to act very responsibly. Clubs often find excuses not to play games and seek postponements. This can't happen now and the attitude among all must be to find reasons to play all games rather than seek postponements, even when issues and other commitments create local difficulties. It is the only way it can work.

1 – How often have Offaly won three Leinster senior hurling titles in a row?

2 – How many All-Star football awards has Mick Ryan won?

3 – When did Offaly win their first Leinster football title?

1 - How many Birr men started the 1980 Leinster senior hurling final?