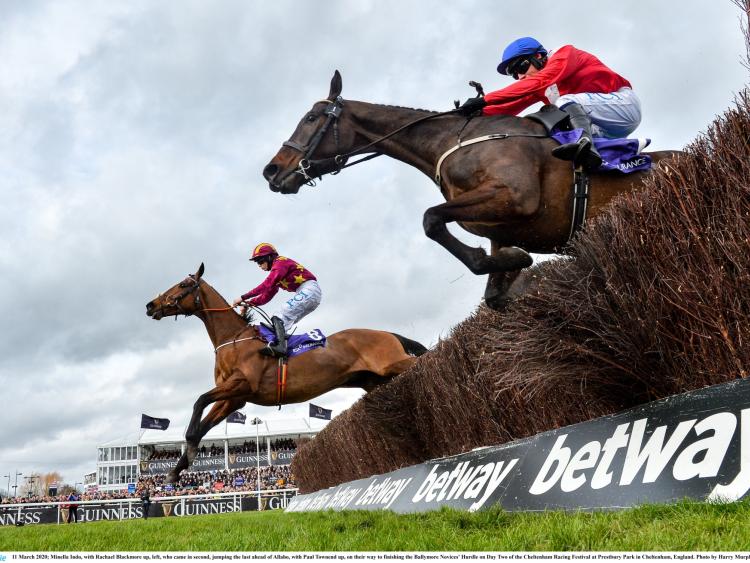 Minella Indo, with Rachael Blackmore up, left, who came in second, jumping the last ahead of Allaho at Cheltenham last year

Leading owner Barry Maloney is hoping that Paddy Power Irish Gold Cup favourite Minella Indo will put an uncharacteristic tumble last time at the eighth fence in the Savills Chase behind him in Sunday’s feature contest at Leopardstown.

The hugely-exciting eight-year-old, who is 6-4 favourite with the sponsor for the weekend highlight, was unbeaten this season before that having cruised to victory in both a Grade 3 chase at Wexford in October and then at one higher level at Navan the following month.

Maloney said: “Look it was a very novicey mistake last time – he got too close and never rose up. He’d not put a foot wrong before that and hopefully it was a one-off. Rachael [Blackmore] was up on him last week and jumped a few and he was jumping beautifully with no adverse effects and we’re hopeful.”

Asked what the reports from home were since that unfortunate mishap, Maloney continued: “He’s been great – he only got half a race last time and we’re excited to get this run into him. He’s the kind of horse who needs a lot of work and we’re looking forward to him running.

“Before last time he’s never been out of the three, mostly in the two, and look, he’s been unbelievable. He’s one of those horses that we’re very privileged to be involved with and we’re hoping that he will redeem himself and we’re very excited for the race.”

Minella Indo has twice visited Prestbury Park before taking the Albert Bartlett Novices’ Hurdle at the incredible odds of 50-1 in 2019 before finding just Champ too powerful in last season’s Festival Novices’ Chase (then known as the RSA Insurance Novices’ Chase).

“He will definitely go for the Cheltenham Gold Cup if all goes well on Sunday,” declared Maloney. “He’ll head to the Gold Cup for sure and look, in the RSA last year his jumping was faultless until the last fence and for whatever reason, he got over it but not very well.

“Had he jumped the last fence like he jumped the rest of them, Champ wouldn’t have got to him. Allaho was there after the last and fair play to Champ, but had he jumped it, he would not have been caught – no way.

“Fingers crossed he’s favourite for Sunday’s race and he’s in against the big boys. He fluffed his lines last time and he needs to deliver this time.”