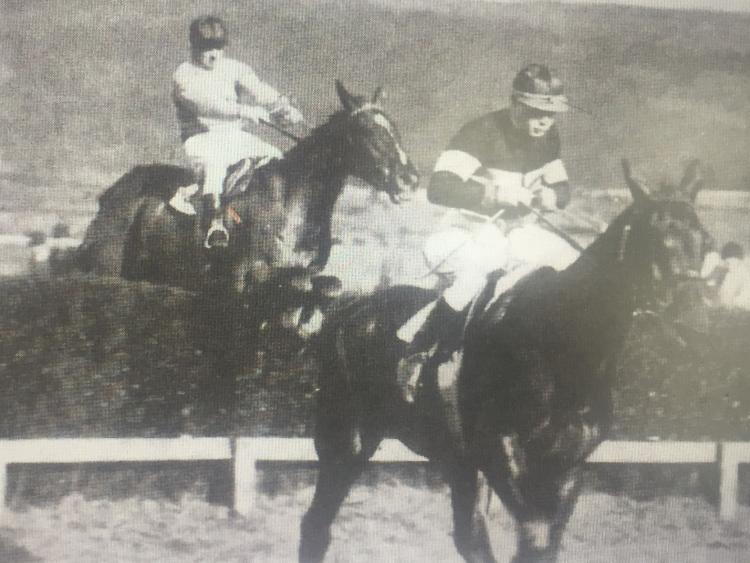 Kako the only Cheltenham Gold Cup winner to win at Kilbeggan

WE are living in strange and unprecedented times, as we try to cope with Covid-1. We are dealing with tragedies, as loved ones are taken from families and phrases like “cocooning”, “social distancing” are part of our daily lives. Doctors, nurses, and many more are risking their lives on a daily basis.

On the positive side, it has brought ordinary people together in the sense of helping each other locally, communicating on phones, on-line etc. In sporting terms GAA, soccer, rugby, horse racing etc are all wondering what will happen in the next few months. Cheltenham Races, soccer matches etc in Britain were tragic mistakes and should never have happened. It’s also clear that around the world, people are seeking some outlets for sports including golf, soccer, horse racing etc, even if it’s just watching “live” sports on TV.

Kilbeggan and Roscommon race courses are the only ones in the midlands and have been part of our great midland sporting tradition. Kilbeggan was due to have its first meeting on Friday 24th April and naturally and correctly it was not on, with two meetings each due In May, July, and August, plus June and September (nine in total).

What might be possible into the future is a few meetings being held behind closed doors, depending on the situation and best advice, which would be safe and then could be watched on-line or on TV. Kilbeggan races is unique in that it survived by being resilient, while larger towns with racecourses disappeared like Mullingar (1967), Athlone (1923), Tullamore (1903), and Birr (1907).

The first recorded race meeting in Kilbeggan was held on 9th March 1840, with apparently 30,000 in attendance. Remarkably, the races went on to 1855, which meant it carried on through the worst period in Irish history, even worse than now, as one million people died during the Great Famine of the 1840’s and another million emigrated.

It started again in Ballard 1879-85, during the era of Parnell, Davitt, and the Land League, which was one of the most difficult and dangerous periods in our history. Racing commenced again in 1901 and has been taking place every year since (except during World War II), including land agitation, transport strikes, World War 1 (the races was saved by a last-minute telegram from the House of Commons), Spanish Flu, 1916 Easter Rising period, and the Civil War of the 1920’s. The Kilbeggan races were also under threat of closure by the Racing Board in 1956, 1963, and 1969, with a debt of £13,000 at one point.

Through the great will of the committee and the local people, the money was raised through dances, draws, and card drives and Kilbeggan survived. The point of this is that many obstacles can be put in your way but with resilience and belief, we can survive and this can also apply to Covid-19.

On a lighter note, Kilbeggan now has nine National Hunt race meetings, the €100,000 Midland National, which was sponsored by AXA last year was a great success, guests attending recently included President Michael D.Higgins, the Taoiseach, ambassadors, plus the great support of the midlands, and people who love the hurdles & chases. In the period 1916-23 great horses raced on the track like Shaun Spadah (Aintree Grand National 1921);Koko (Cheltenham Gold Cup 1926); Punch (Irish Grand National)), Clonsheever (two Galway Plates) and All Sorts the horse, who had to walk home 60 miles after winning the Irish Grand National on Easter Monday 1916, because of the Easter Rising.

On 24th April 1850 the Tullamore Challenge Cup was raced for in Ballykilmurray, within a few miles of the town. A £10 cup added was won by Pat Boylan’s horse Paddy Carey. In 1851 around 120 members of the RIC were present to control crowds and keep order. In 1852 it was a 2-day meeting with the Ballymooney Cup the feature and it was for those residing in the county or within 20 miles of Tullamore.

A tragedy occurred in 1856 when jockey Darby Jennings was killed. In 1864 there was only 2 races and for economic reasons or lack of support it ended. It was revived in 1885 with the streets crowded, as they went in to the Charleville Arms Hotel and trains from Dublin, Cork etc. The driving force was Major Trocke the well- known jockey and J.L Sterling, Secretary. Jockeys riding there included the Beasleys, W.P Cullen (won 3 Galway Plates) etc. Michael Gorry of the news agency was a sort of “town crier” ringing a bell while announcing sale of race cards. In the early 1900’s, Captain Daly, Dr Moorehead, and J.H.Locke were the driving force but the fields became very small and the final winner was The Hawk 1/2 F. Tullamore and Offaly has had plenty of success in racing over the years.

During World War II the most valuable race in Ireland was run at Leopardstown worth £2,610 to the winner It was won by a horse called Jack Chaucer owned by Larry Egan of Egan’s Bottles. He bought drinks for everyone and spent all his money. When he got on the bus he said “ I’m Larry Egan owner of Jack Chaucer the winner of the big race” “Oh Yeah” said the conductor as he flung him out. To make up for it, there was a great bonfire in O’Connor Square, when he came home. Guy Williams came from a well-known Tullamore Distillery family that produced Tullamore Dew and Irish Mist. He later became a horse trainer and in 1980 won the Irish Grand National with Daletta, One of the greatest jockeys in modern times is Pat Smullen, Rhode and from the time he joined Dermot Weld’s stable as a 22 y/o in 1999 he went on to worldwide success ( called “the professionals professional”) and won major races like the Irish Derby on Grey Swallow. We wish him well in his fight against cancer and all the good work he is doing. Other famous Offaly horses include Aintree Grand National winners like Kilmore in 1962; Papillion (The Moneygall Butterfly) who won in 2000 for Ted & Ruby Walsh, Freddie (“The Shinrone National”) etc. Brown Jack the most famous horse before Red Rum and Arkle was trained was trained by Aubrey Hastings, Sharavogue House, and won seven years in a row at Royal Ascot.

There are many more that could be mentioned and maybe in the near future there will be more success for Tullamore and Offaly when racing returns, as we learn to control the Covid-19. In the mean -time take care and be safe.