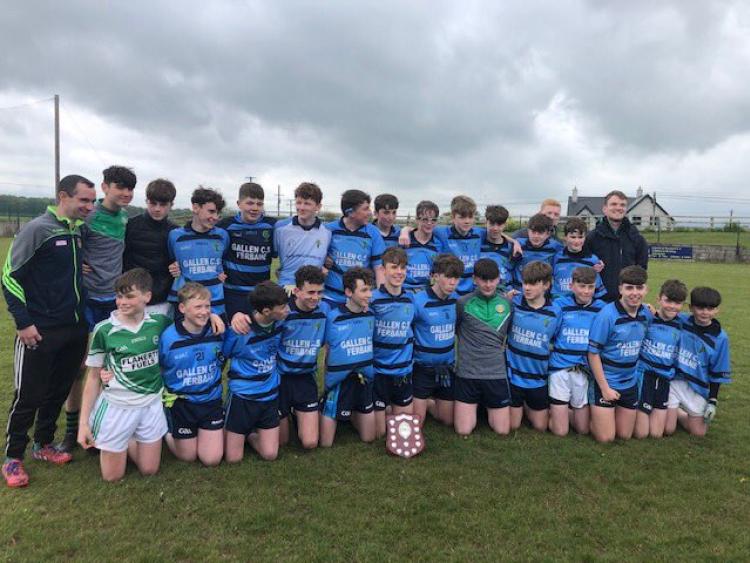 Gallen emerged comprehensive winners by virtue of a 6-9 to 0-5 scoreline over Ramsgrange CS.

This was Gallen's first victory at juvenile provincial level since 2001 and many of that 2001 team backboned the 2004 Ferbane Schools team who got to the 2004 All Ireland Senior Vocational Final. At senior colleges level, the school claimed the All-Ireland Colleges Senior B Football title back in 2016.

Gallen, well tutored by mentors Mark Garry and Georgie Phibbs, were very strong down the middle from full back to full forward and this provided an attacking platform for the Brosnasiders.

Ramsgrange had overcome Hacketstown in the South Leinster decider but Gallen were ready for the Ramsgrange men and had their homework done on their opponents.

Oisin Carroll was excellent in goal, Saran Flynn, Michael Spillane and Donal Flynn were rock solid in the full back line even pushing forward and pressing their opponents with good zonal work.

Gallen lined out without influential midfielder Conor Beirne who was injured but just as the injured  Harry Kane provided great support for his Spurs teammates in their comeback victory against Ajax, Conor was there enthusiastically supporting his team. Gallen, unlike Spurs, stamped their authority on this game from the outset and had no need of any comebacks.

Ruairi O'Neill was sound at left halfback and Conor Grennan with  0-2 and James Buckley with 1-2 contributed 1-4 between them from midfield. Matthew Darcy with 0-1, Sean Carroll with 1-1 and Eoghan Grennan with 1-0 formed a free-scoring half-forward line, with Carroll playing a real joint captain's part with his hard work and leadership skills regularly on show.

In the inside line, Luke Coleman worked tirelessly. Ciaran Lally with 1-0 and Ronan Flynn, who emerged as top scorer with 2-1, really tormented the Ramsgrange full-back line.

Gallen's support play and off the shoulder running helped them breach the Ramsgrange rearguard for four goals in the first half, the goals coming from Ronan Flynn, James Buckley, Sean Carroll and  Eoghan Grennan. Gallen also clipped over 6 points to lead 4-6 to 0-1 at half time.

The game was done and dusted at this point but further goals by Ronan Flynn and Ciaran Lally closed out the game leaving the Gallen men victorious in emphatic fashion.