Offaly kickboxers prepare to take on the world in Venice 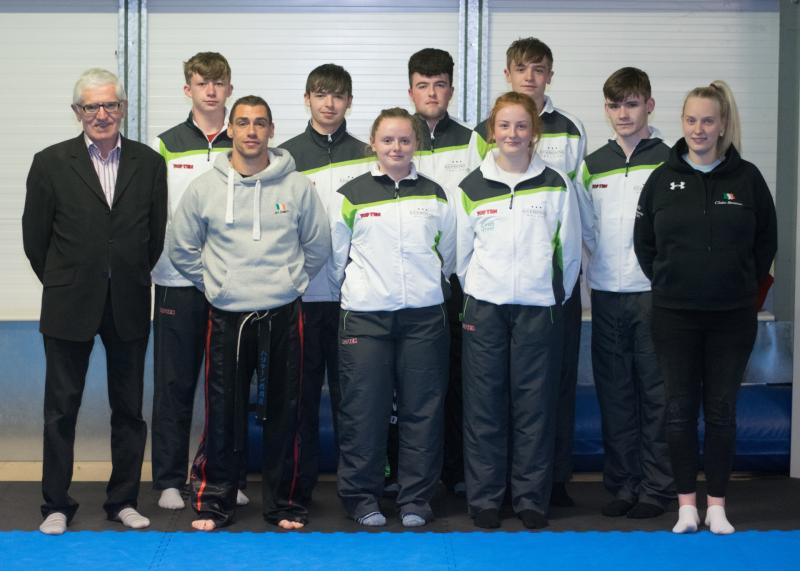 Last Tuesday evening, September 4, Cllr. Noel Bourke of the Edenderry Municipal District, made the short trip to
Velocity Academy in Clonmullen Business Park in the town to meet the Team Hurricane Kickboxers who will be part of Team Ireland at the upcoming World Association Of Kickboxing Organisations (WAKO) Cadet and Junior World Championships in Venice, Italy.

The Municipal District had earlier in the summer helped the club fundraising committee with a community grant to cover the costs of the Team tracksuits, fight suits and fight fees.

The Edenderry club has seven athletes and two coaches travelling with Team Ireland next Sunday, September 16, for the week-long event. Coaches Jay Daniels and Claire Brennan will sit behind each athlete along with a Team Ireland coach and what a week it will be, with 1,755 competitors registered from 62 different countries.

Representing the club in the Junior section or Under 19 are Saibh Kelly, Nathan Tait, Sean Kelly, Brandon Tait and Chad Brennan with Leah Grant and Luke McCann competing in Older Cadets or Under 15.

Saibh Kelly is 17 years old and a Black Belt in the club she has attended since she was 3 years old. Saibh has completed her leaving cert and starts in Maynooth University this term. Saibh competes in the -70 Kg section in Point Fighting and is 6 times national champion.

Nathan Tait from Ticknevin is the younger of the Tait brothers to compete at 16, again a Black Belt and 11 years at the club. A St. Mary’s Edenderry pupil starting 5th year, Nathan fights in the -57 Kg Junior section, he has been there and done it all before, World Champion in 2014 as a Younger Cadet.

Chad Brennan is another 17-year-old and starting his leaving cert year in St. Mary’s. The Edenderry man is 8 years in the club and the proud holder of a Brown Belt. Chad competes in the Junior -74 Kg section with a silver medal in the national finals the past 2 years and bronze in the Irish Open in 2014.

Sean Kelly, holder of a brown belt the oldest of the group at 18. Sean is in leaving cert year in St. Joseph's Rochfortbridge and is 8 years with the club, fighting in the -84 Kg section and listing his career highlights as WKC national champion in 2013, WOMAA world games champion 2017 and KBI national champion 2018. Sean is the lone Rhode man in the travelling party and at his first major World Championships.

Brandon Tait, 17 years old and in leaving cert year in St. Mary’s, holder of a Black Belt after 11 years in the club. Fighting in the -69 Kg section having been national champion 5 times. Brandon was part of the Irish Team to take European Gold 3 years ago in San Sebastian.

Luke McCann is 15 years old and 11 years with the club, a Black Belt holder, he attends Oaklands Community College where he is beginning Transition Year. Luke is attempting a treble at the World Championships, competing in Point Fighting, Light Contact and Kick Light in the -52 Kg section. Luke had a huge year in 2017 winning the Irish Open, the Hungarian Open and the US Open, and also previously a World Championship bronze medal in 2016.

Leah Grant, the 15-year-old Edenderry native, is a martial artist for the last 8 years. Another student of St. Mary’s and has
started TY, fighting in the -55 Kg section, Leah’s career highlight was receiving her Black Belt. Leah is also a World Championships silver medallist from 2016, and bronze medallist at the European Championships.

Jordan Doran was a club member for 10 years before moving to Red Star this year, and is in Leaving Cert year at Oaklands College. The 17-year-old will also attempt the treble in the Junior +70 Kg sections with Jay Daniels coaching in the Point Fighting sections and Jon Mackey coaching in the Light Contact and Kick Light. Jordan was WAKO World Champion in point fighting 2014, European Champion in light contact 2015, with Gold in light contact again at the World Championships in
Ireland in 2016.