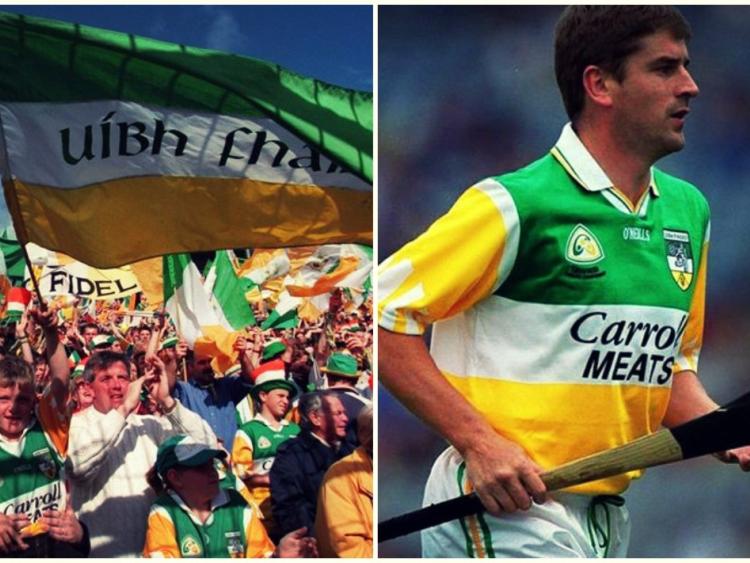 Offaly last tasted All-Ireland success two decades ago in the summer of 1998, but the victory was somewhat iconic. An ageing Offaly team described by their manager Babs Keating as 'sheep in a heap' staged a mid-season mutiny after their Leinster final defeat to Kilkenny. Babs was dispatched and Michael Bond stepped into the breach.

Then came the early whistle against Clare in the All-Ireland semi-final, the sit-down protest and replays, which will go go down as one of the most extraordinary GAA moments of all-time. The replay win set up a rematch of the Leinster final against Kilkenny in the All-Ireland decider. Brian Whelehan hit 1-6 and the rest is history.

That 1998 All-Ireland is the only Offaly one in my living memory. As a seven-year-old boy in Edenderry at the time, my experience of hurling was a peripheral one; from the perspective of a non-hurling stronghold, and the sort of Skittle-fuelled oblivion that generally clouds the minds of most seven-year-olds.

Nevertheless, as a sports fan, that iconic Offaly jersey ended up on my back and the Sunday Game on the television. The commentary was the soundtrack to Sunday afternoons that permeated my consciousness. It was the same summer France won the World Cup and I ran around the garden in a t-shirt emblazoned with the France '98 mascot, a blue and red cartoon cockerel, pretending to be Zinedine Zidane one minute and Johnny Dooley the next.

Such was the aura around the golden generation of Offaly hurling in the 1990s, small ball fever even caught on in Edenderry, and the hype around the All-Ireland certainly gripped the town in 1998 with Cillian Farrell on the senior panel. That was probably the reason it captured kids like me; someone from your place who went to your school involved with such success. It was infectious.

I remember the exodus from the town that Sunday; cars draped in flags and laden down with hope heading for the Dublin road. The rest of us headed to the pubs of the town with our families. For many in Edenderry it was Byrne's Bar, and that pub pilgrimage was replicated across the county.

As a child, you're fairly oblivious to the details of the game, only looking up upon raucous cheering or the groans of aul lads at a near-miss or Kilkenny score. The bustle of the crowds reduced the commentary to mere background babbling, attentions piqued if the urgency increased in Ger Canning's voice, the screen barely visible over the heads of others. But the hysteria was tangible, even to a small child, probably especially so.

I was probably out the back of Byrne's pub with cousins and friends when the final whistle sounded and a hum of jubilant cheering rang out from the bar, a sound intermittently made louder by the opening of the door as someone escaped the crucible to catch a breath outside. While I was unaware of the significance of an All-Ireland final win, you never forget that buzz. Grown men were hugging each other and clinking glasses and waxing lyrical about Pilkington and the Dooleys, and Whelehan, 'Jaysus Whelehan, wasn't he pure class today.'

We, as children, lapped up the atmosphere, and made it in many ways; standing at the bottom of Gilroy Avenue and the Arden Road and Castle Street, waving Offaly flags and signalling passers-by to beep their horns. The sale of hurls went through the roof and we were mesmerised by news reports showing the team bus parting crowds of supporters in Tullamore like the Red Sea.

I remember little of the sit-down protest or the back and forth between Michael Bond and Ger Loughnane after the semi-final saga with Clare. I simply revelled in the fact that my county was on top of the world, as I saw it. Up there with France and the World Cup final. They had Zizou but we have Yabba Dabba Dooley, and that was infinitely more impressive in my mind.

You can't help but look back at that time with great fondness. As youngsters it was the innocence of waving flags and tying woven bands in the Offaly colours around our heads, while adults skulled pints and shook hands and shed tears for a week solid. It was pure joy, and that's what was universal about it.

Having now gone 20 years without a similar feeling, long since grown out of the famous '98 jersey and seen Offaly hurling fall to the Joe McDonagh, it's easy to get pessimistic. But there's something of 98' we have left and that's the spirit that whipped us all up into a frenzy, and most importantly, many of the men who were on the pitch - doing the hurling, now, not the sitting down.

Many of the current Offaly panel are my age, in their mid to late 20s, and like me, can just about recall the scenes on the television or in Croke Park, or the Liam MacCarthy arriving into an assembly hall of a Monday morning, and that's a distinct advantage. Kevin Martin was a hero in 1998; he was Ronaldo to the hurling youngsters in Birr and Tullamore and beyond. Now he's at the helm, managing lads who may have pucked ball in their gardens, imagining it was Croke Park in 1998, now under his guidance in the Faithful Fields.

There's a lot to be said for inspiration like that. There's a full circle to be made there somewhere that can get the wheels in motion for a new generation. It's the type of link that played a part in Clare's 2013 success with a Banner hero of the same era, Davy Fitzgerald, on the line for that famous victory. A Leaving Cert student at the time, Shane O'Donnell, who would have grown up with the image of Davy stopping Offaly and Cork and the Cats between the Clare posts, was the hero of the piece. That's not all coincidence.

There's a lot to learn from Offaly's heroes of 1998 and a lot to be harnessed from their expertise and experience. That's why Offaly hurling is in a good place, despite the Joe McDonagh drop and all the talk of the Faithful demise. You have to go all the way back to 1998 and Michael Bond to find a team with an outside manager winning an All-Ireland. Having someone from within with the record and reputation of Kevin Martin is a huge asset. An outside manager worked for us in 1998, but it was certainly the exception rather than the rule. Only an insider of the ilk of Kevin Martin has the power to summon that spirit in the current crop.

We are on the verge of blooding a team that will have no memory of Offaly success like the one expressed here. While they are learning from the likes of Michael Duignan and Simon Whelehan who have claimed All-Ireland success and managed younger teams in the recent past, their tangible connection to their era is waning. Hubert Rigney lifting Liam MacCarthy aloft will become just a grainy clip on Reeling in the Years to them, and that disconnect is something we can't afford to make if the tradition is to live on.

Two decades of hurt has brought us to the bottom of the pit. The way out is long and tumultuous, but like the journey to Croker on All-Ireland Sunday in 1998, it's one laden with hope, and it's one worth making. Lest we forget.