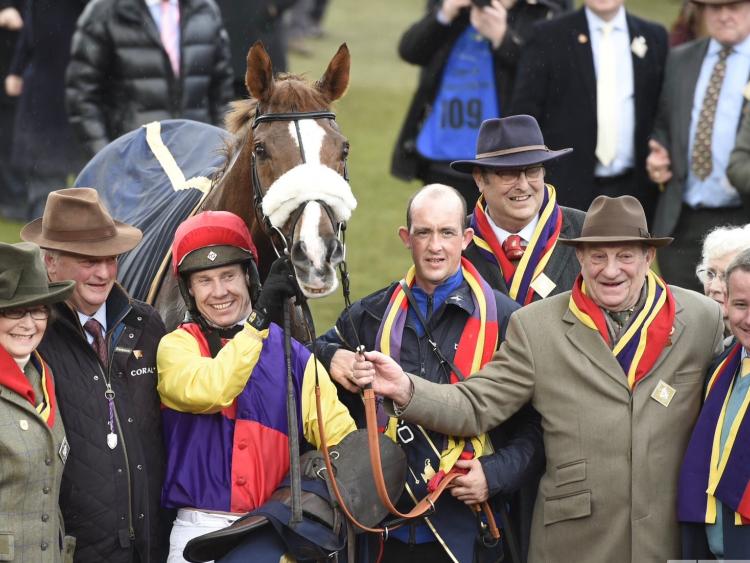 As the 2018 Cheltenham Gold Cup drew to a close last week and Colin Tizzard's Native River stuck its neck out to win from Might Bite, one Offaly man was down on the course celebrating with the trainer's daughter and the horse's groom.

Tullamore's Tom Malone was central to Native River running in the colours of Garth and Anne Broom, and winning the biggest race in National Hunt racing - because he bought him as an athletic, imposing young horse more than four years ago.

The Gold Cup hero was purchased by John Dineen at the Tattersalls Ireland November National Hunt Sale in 2010, but it wasn't long after his debut in a point-to-point that Tom Malone, the high-flying bloodstock agent, was making a famous phonecall.

That would be one of a number of phonecalls Tom credits with changing his life, which started with his family back in Arden View, Tullamore. Tom lived there with his mother Mary, father Tom, who was a carpenter and bricklayer originally from Ballycommon, and his siblings, Claire, Carol and David.

Tom didn't see a horse until his was 14 years of age when friends of his encouraged him to go with them to a horse riding lesson in Clara. "This particular Saturday morning, I was hanging around with friends of mine, Joanne Leonard and Aishling Devine, and I recall it was my 14th birthday," Tom said.

"They were going to Clara for a riding lesson and they said come along and that they would pay for me to have a lesson. At the start I wasn't at all interested but in the end I thought what have I got to lose."

"That decision alone changed the course of my life," Tom told the Offaly Express. "I fell in love with horses that day and got the bug."

Tom had perhaps eight more lessons after that with the owner of the equestrian centre, Brian Sheridan, before taking a weekend job there. "His wife Frances looked after us all like a mother and Sunday evening roast dinners after hunting are times I will never forget," he remembered.

At that time, Tom took up hunting and pony racing as his love of horses grew, and he remembers Paddy Cutler being a big help in those early days with regard to getting from place to place, and still counts him as a family friend to this day.

Tom got his start in the racing game in Offaly with Tom Lacy in Rhode, from whom he says he learnt a lot. He then moved to J.A Quinn's yard on the Curragh and later to Philip Rothwell's in Wicklow.

He was enjoying his racing, but he says a chance meeting at a greyhound track inspired his move to England to chase a career as a jockey. "I met Ronny Beggan who had ridden in England for Michael Dickinson, and he told me that night, if you're going to shovel shit, shovel it for the best, and if you're going to ride, ride for the best."

"That statement stuck with me for the rest of my racing life," Tom said. He decided to make the move to England and having checked out who was giving young riders a chance, he contacted Philip Hobbs who gave him a job.

"It couldn't have gone better at the start, I had three winners from my first five rides, but unfortunately I broke my shoulder, which left me out for three months," Malone recalled. On his first ride back after that injury setback, disaster struck again as he broke his ankle in a fall.

"My job had been filled at Philip Hobbs while I was out and I decided to go home to Ireland. I packed my Ford Fiesta full of clothes and headed for Tullamore - a failure in my eyes," Tom told us.

"People were going to say there's Tom Malone who went to England but didn't or couldn't make it, and that broke my heart," he added.

"I pulled up at Fishguard docks waiting for the boat home and cried my eyes out for what felt like ages. I finally decided that I deserved another shot at making it in England, so I took out my horses in training book and thought about what Ronny Beegan had said to me that night at the dogs, and there was only one phonecall to make."

He called Martin Pipe, a 15-time champion trainer in Britain, and Tom reckons, "that was another phonecall that changed my life." "I never looked back after that and the rest is history."

"I didn't have massive wins as such in the saddle but I won the Agfa Diamond Chase at Sandown on a big Saturday afternoon on Dunbrody Miller; I won the Summer plate for Martin Pipe on Tango Royal; and I won on Quick at 50/1 at Cheltenham on a big Saturday in a Pertemps final."

"In total I rode 70 odd winners and really enjoyed the experience. I rode with the best there has ever been - Tony McCoy, Ruby Walsh and Richard Johnson, and a host of others."

"In reality, I was limited as a jockey and I knew it, but I really enjoyed it and persistence played a big part in me achieving what I did as a jockey," Tom told the Express.

After bringing his riding career to an end, Tom turned to his current profession as a bloodstock agent, buying young horses, engaging in a constant search for 'the next big time' for top connections.

"In truth I hadn't a clue what I was doing at the start but I just kept trying hard and researching as much as I could. I looked at thousands and thousands of horses to decide why one was different from another and why one was good and one was bad."

"With experience and disaster, I put in place a system that suited me and the results started to come. There were times I thought I should have gone and worked for one of the big agents but I was too far into my own business at that point. The biggest plus I had was that I knew an awful lot of people from my riding days so I just kept driving forward. Thankfully it was the best decision I ever made because I've got a proper business now and its turned in a very successful operation," Tom explained.

Tom's shrewd eye for a good horse soon became evident, not least because of a horse called Brindisi Breeze, who he purchased on the point-to-point scene for €150,000. It went to Lucinda Russell's yard and was "a very special horse," according to the man who spotted him.

He only ever had four starts over hurdles, but won them all, including the Albert Bartlett at the 2012 Cheltenham festival. "He could have been anything, but unfortunately he was killed in a freak accident during his summer's break," Tom recalled. He went on to buy the likes of Dodging Bullets who was a star at top British trainer Paul Nicholls' yard and went on to win the Champion Chase at Cheltenham. "That cemented my relationship with Paul and we have become greats friends since," Tom told us. 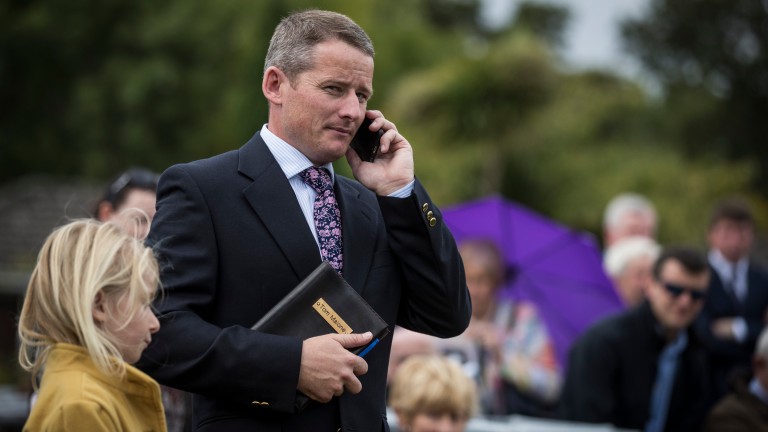 Tom is now one of the top agents in Britain having based himself in Devon some years ago. He travels around the UK, home to Ireland, and to mainland Europe to find and buy horses. His day-to-day job involves studying pedigree, form, point-to-point videos and attending sales events every couple of weeks. He buys for some of Britain's top trainers, including Paul Nicholls, Jamie Snowden, Lucinda Russell and Tim Vaughan.

"I love finding horses privately as that's the time they are not spotted by everyone else. When they get to the sales it's an open market and everyone gets a chance to see them and then buy them.

One such horse he snapped up by private sale was Native River, whose mother, Native Mo, was actually bred in the Midlands in Co. Laois. John Dineen bought the horse in 2010 for just €6,000 as a foal, and four years later, Tom went to see the horse at his yard. He liked what he saw and contacted Garth and Anne Broom to see if they were interested. They loved the horse and after some thinking time, agreed with Tom who went ahead and bought the eventual Gold Cup winner for "less than six figures."

His roll of honour doesn't end there as he also purchased last year's Aintree Grand National winner, One For Arthur, but he counts Native River as the horse he is most proud to say he purchased. Buying a Cheltenham horse is the pinnacle for Tom and he was there in the flesh to watch Native River collect Gold Cup glory.

"I watched it down on the course where I tend to watch most races and celebrated in the arms of Kim Tizzard and Richie Young who looks after him. It was a special feeling I will never forget," Tom told us.

In terms of business, Tom says the world of racing is now an expensive endeavour with the average Cheltenham winner costing an average of €125,000. "Everything has changed in 15 years, the big owners are bigger and stronger now and from the bottom everything is dearer, foals are double the price, 3-year-old stores are double the price, so the form horses are going to be the same." Despite all that, the man himself says the key to a Cheltenham horse is not the price tag, but rather ability, and most of all, pure heart.

Despite his name being on the lips of the top owners in the game, Tom says one thing drives him to stay at the top of his game - fear of losing his touch. "Fear is the one thing that has driven me since day one, every time time you look at a new horse he could be Native River or One For Arthur so you just keep driving forward to find the next one."

Tom is now balancing family and work life in Devon, and admitted that "an eighth day in the week would help." "I am starting to get the work/life relationship under control, and I have three beautiful daughters, Isla, Casey and Darcey who I want to be there for and be their role model. I hope I'm doing that job well."

He says his only regrets are buying bad horses," but went on to say, "that's life - no one gets through this life without big mistakes and as long as I maintain my success and there are less and less mistakes, I'm happy with that."

In terms of looking to the future, Tom is excited by a number of horses he's bought recently, including Envoye Allen who has gone to Gordon Elliott's, as well as Danny Kirwan and My Way who are at home with Paul Nicholls.

His business is flying, he is now the man behind the purchases of the reigning Gold Cup and Grand National champions, and yet his focus is on the race he'd simply love to win.

"The Champion Hurdle is the one that's missing. I've had the Champion Chase, Gold Cup and Grand National, so the search continues," Tom concluded.