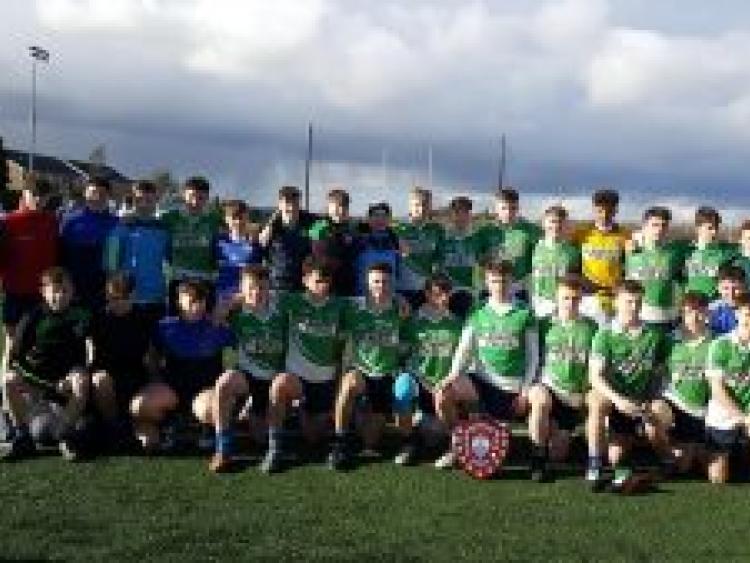 A goal from Michael Egan just before half-time proved to be decisive as Gallen Community School, Ferbane beat Cnoc Mhuire Granard in the North Leinster Senior ‘B’ Football Championship Final at the St Loman’s GAA Grounds, Mullingar on Thursday last.

Cnoc Mhuire scored two late points to reduce their final deficit to two but Gallen were sharper and more clinical in front of the posts.

Rising star Cian Johnson, the extremely talented forward who plays inter-county senior football with Offaly, was excellent throughout and showed just why he is so highly rated. He appeared to get a touch to the ball for Gallen’s first goal when the ball was played in by David Nally.

Cnoc Mhuire opened the scoring in the fifth minute through Liam Wilson but three minutes later Gallen got that first goal. Cnoc Mhuire cut the gap to one with a point from Cian Madden and prior to that score Cormac Reilly had brought a save out of Gallen keeper Jack Cullinane.

Three points in a row put Gallen ahead by four in the 19th minute. Ryan O’Reilly replied with a fine point for Cnoc Mhuire in the 20th minute and one minute later the Mullahoran lad scored a goal to leave the sides all square; PJ Masterson with the pass and O’Reilly with a neat finish to the net.

Points were exchanged between Cormac Reilly and Cian Johnson before Gallen got their second goal which proved to be crucial. Cathal Flynn did well to play the ball in from a tight angle and Michael Egan found the back of the net.

A nice point from Ryan O’Reilly left Cnoc Mhuire trailing at the break by two points, 2-4 to 1-5.

The gap was one in the first minute of the second half when Cian Madden pointed and then a free converted by Jordan Martin left them level again but Cnoc Mhuire could not get that score to edge them in front.

Gallen responded with a point from Cian Johnson after Cnoc Mhuire keeper James Keogh made a great save to deny Michael Egan a second goal. Three more points for Gallen put four between the sides by the 53rd minute as Cnoc Mhuire struggled to get scores with the Ferbane side defending superbly.

Points from Evan Murphy and a fantastic Ryan O’Reilly strike cut the lead to two but Cnoc Mhuire then lost Eddie Smyth and Darren Sheils who received black cards. A pointed free from Cian Johnson left the goal in it and despite Cian Madden’s converted free time ran out for Cnoc Mhuire and their title hopes.