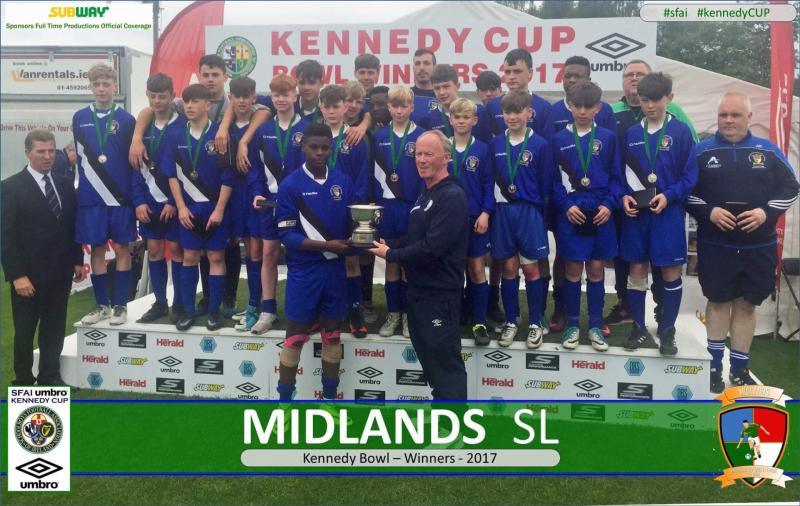 The Midland Soccer League team have won the Kennedy Cup Bowl competition after a number of clinical performances at the 2017 national tournament for U14 players in Limerick. Offaly was represented with seven players on the squad with six from Tullamore Town and one from Birr Town.

Competing in Group 1 of the competition, the team, made up of players from clubs throughout the Midland Soccer League, battled to a 1-1 draw with Kilkenny in their opening game. Tullamore's Eoin Gavin gave the Midlanders the lead on 22 minutes, but the young Marble city men hit back with an equaliser early in the second half.

Another draw followed against Carlow after a hard fought scoreless encounter, before the team's first win came against   Limerick Desmond. The home outfit had won their opening two games, but Eoin Gavin finished a piece of team magic to earn a 1-0 win. Starting on the edge of the MSL penalty area, a great passing move saw Eoin slide the ball home from 12 yards.

That win was enough to put the MSL outfit through to the quarter-final where they met Donegal and produced their finest display of the tournament. A good defensive effort limited Donegal to long range shots, and in the 56th minute, that man Eoin Gavin once again stepped up to score his team's only goal in a 1-0 victory.

MSL started well in their semi-final tie with Waterford, hitting the crossbar and seeing an early effort cleared off the line, but both teams were resolute at the back, and the game ended in a 0-0 draw. After a tense penalty shoot-out, where MSL keeper Louchlann Quinn stopped two Waterford efforts, David Olubowale was the man on the spot to slot home the decisive penalty, sending the MSL side into the Bowl final.

As expected, the final was a closely contested affair between MSL and Dundalk, but once more, the midlands defence was strong, thwarting Dundalk at every turn. In the 36th minute, Eoin Gavin produced the game winning moment as he sent his free kick sailing to the net. MSL held out, and despite chances arriving late for their opponents, Jamie Mulkearn's was in fine form between the posts.

In a tournament where two early draws made life difficult for the MSL side, a rock solid defence and enduring team spirit, was enough to see them over the line. Eoin Gavin grabbed the headlines, scoring all of the MSL goals, but each member of the MSL squad took part in an epic win for the league.