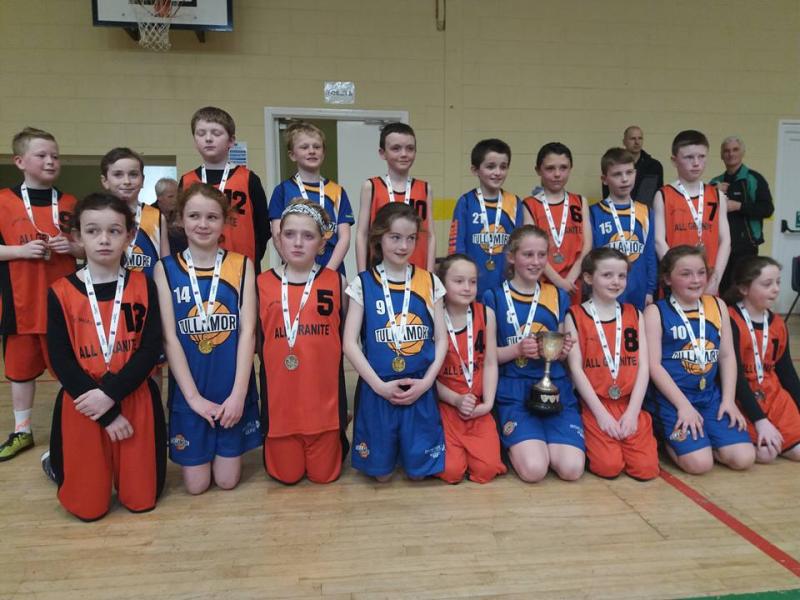 Tullamore Community Games Under 11s and Under 13s, along with supporters, set off to the Leinster Finals in Carlow last Sunday, April 2.

The Under 11s took on Keenagh of Longford in what was quite a physical and low scoring encounter. In fact an unusual scoreline of 0-0 ended the first quarter. In the second quarter Tullamore continued the stingy defence led by Rose O'Brien, while they began to get some scores on the board also. The second half was tight but thanks to some super offence from Julia Slattery at point guard and David Pender the team eventually prevailed by a scoreline of 9-2.

At the St Leos College venue, the Under 13 team were involved in quite a struggle against Dunshaughlin of Meath. Tullamore started brightly and had a six point lead at the end of the first quarter. Some fine lay ups from captain Aoife Shaw and excellent defence from Aisling Cotter were highlights at this stage.

Dunshaughlin fought back to narrow the gap to 4 in the second half but Aine Bermingham stepped up to score and maintain the lead while Amy McGreal defended the basket like a tiger. This lead was needed as Dunshaughlin brought it back to 2 points in the last 5 seconds but Tullamore held out to win 20-18, meaning two Tullamore teams advanced to finals.

In the Under 11 final against Carlow side Slaney Valley, Tullamore got off to their usual bright start with captain Niamh Galvin lighting up the gym with some fine scores. The Carlow outfit had some super players and started to come back well in the second quarter. Solid defence was needed from Martin O'Ceilleachair and also from Sebastian Bard to curtail the opposition but finally the dam broke as Slaney scored late in the fourth quarter to level the game at the end of regulation time.

Overtime of 3 minutes was required to separate the sides now. Tullamore had a few half chances before an intercept fell to Una O'Brien who dribbled inside before nailing a super jump shot to send the Tullamore fans into delirium. A tense final minute with both sides having chances came to an end with Tullamore in possession and when the final hooter sounded the team realised they were finally Leinster Champions.

After the presentation it was over to St Leos for the Under 13 decider against Kill/Johnstown of Kildare. Both sides were very evenly matched and they traded baskets until half time where Kill led 6-4. The defensive work rate of Julie Kelly was complimented by the determined covering of Naoise McDonald for the girls in blue. After half time Kill had a series of dangerous attacks which would have yielded more scores but for the hassling of Sinead Ni Cheilleachair.

Saorah Doyle was having an exceptional game marking Kill's danger girl but disaster struck when Saorah unfortunately fouled out. Kill took advantage to go into a 5 point lead. It was in the final quarter that we saw Tullamore's never say die spirit come to the fore. Siun O Brien led the way with an outstanding display of outside shooting which yielded 2 baskets. The game was in the melting pot now with a 3 points margin when Aine Bermingham made her way to the basket only to be fouled as her shot rolled off the rim. A 3 point play here would have equalled the score but it was not to be as Kill held out for a deserved victory.

Tullamore will take comfort in the fact that half the team are underage for next year's competition so the future is bright for these girls.