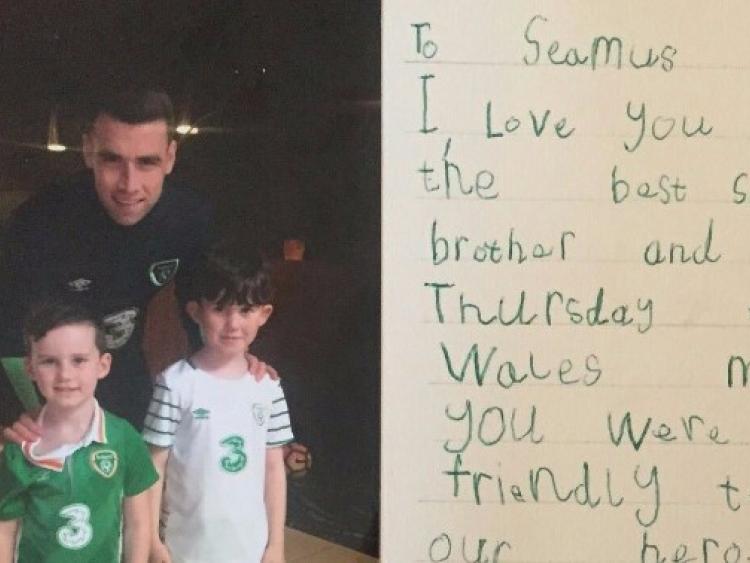 Seamus Coleman's leg break in Ireland's World Cup qualifier with Wales has seen well wishes arrive from all over the world, but no one has said it better than these two Offaly brothers.

Reece Kenny (5) penned a letter with his brother Cody (7) to wish the Ireland captain well as he starts his recovery from a double leg fracture, telling the Donegal man that they were "so sad" that his bones were broken.

The boys' mother Michelle Kenny, from Blue Ball in Co. Offaly, told the Offaly Express that the brothers got very upset after Coleman suffered the injury.

"When we were leaving the Aviva, Cody saw two men in front of us looking at their phones at images of Seamus' leg, and he got immediately upset and was still crying when we got back to the car," Michelle said.

"I think it was because they had met Seamus the day before and he was so nice and obliging, signed their ball and chatted to them. Reece asked would it be okay for them to send a letter to Seamus, and I think his words just sum up everything," she added.

"I love you so much," little Reece wrote, telling the Everton clubman that he was "the best soccer player."

The young brothers met their favourite player last Thursday, the day before the Wales game. "My brother and I met you and you were so kind and friendly to us."

"You are our hero," Reece wrote.

"We were at the match and we are so sad for you that your bones are broken. We hope you get better really soon," he concluded.

He signed off his letter by writing, "Love from Reece Kenny (5) and my brother Cody (7) from Offaly."