Tullamore's Danielle will run for Ireland later this month 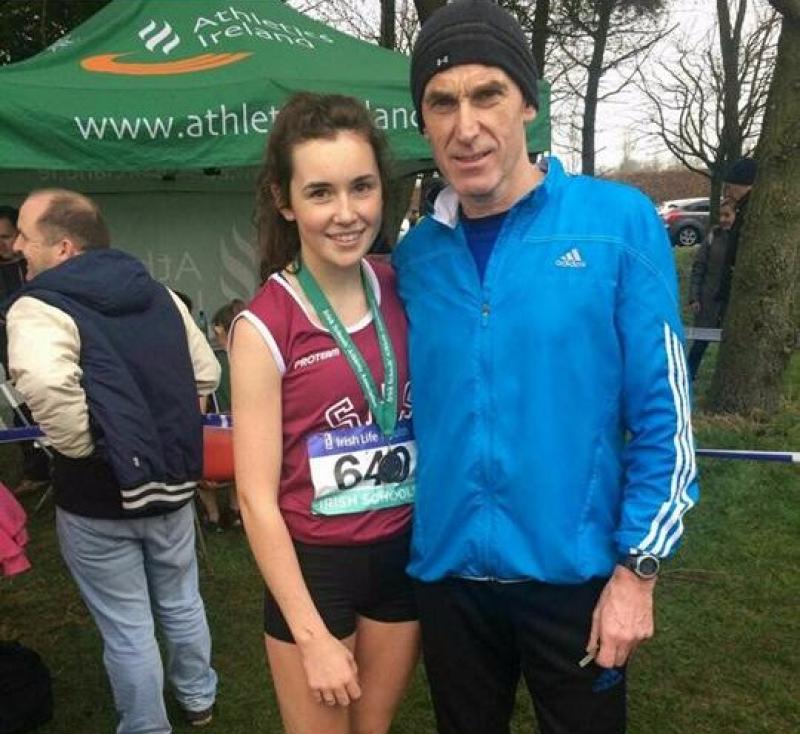 Danielle with her Dad John after last weekend's run

Tullamore teenager Danielle Donegan crowned a very successful weekend for the Tullamore Harriers when she booked her place on the Irish team to run in the Schools International Cross Country event later this month in Wales.

Danielle, who is a student of the Sacred Heart School in Tullamore, travelled to Mallusk playing fields, just north of Belfast, at the weekend to compete in the All Ireland Schools Cross Country competition. In the region of one thousand athletes travelled northwards to compete in the event in tough conditions. The rain held off but the heavy rain over the last two weeks had left its mark on the course, sapping the energy out of the athletes' legs. The course was waterlogged and for long stretches athletes ran through muck.

Tullamore Harriers had four athletes competing for their respective schools and all had good runs in their respective events. Danielle Donegan, representing her school, Sacred Heart, Tullamore, was the standout Harriers performer in the Intermediate Girls race.

Danielle started the race brightly and was in the leading pack from the gun and right through the first lap. As Sarah Healy took the lead and quickly left the field in her wake, Danielle powered through the heavy sod to bravely give chase and found herself in sixth place midway through the event.

Over the next kilometre she moved up to fourth place and even looked like she might get into the top three at one point during a wonderful display. However, during the final run-in, she was caught by a fast finishing Niamh Carr from Coleraine, but Danielle was safe in the knowledge that her fifth place finish was good enough for her to be selected to run for Ireland in the upcoming Schools International Cross Country, which takes place in Port Talbot, Wales on March 25.

Danielle is now the tenth Harriers Juvenile to represent Ireland in an endurance event in the past decade. Many of these won medals at the Schools International, and Tullamore Harriers are hopeful that the talented Danielle can follow in those footsteps.