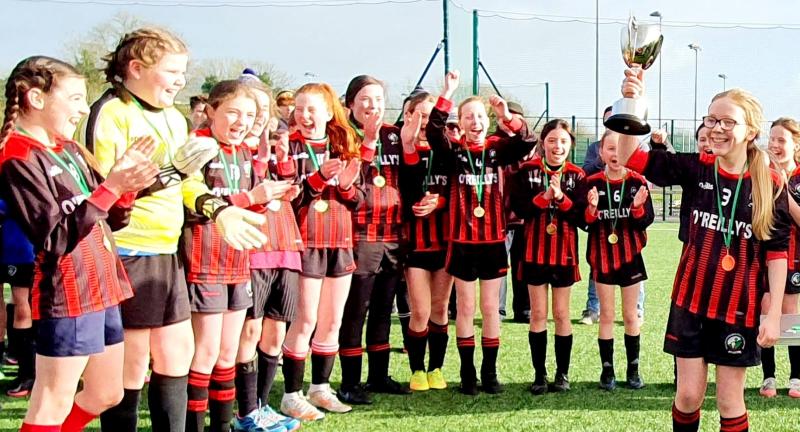 Killeigh after receiving the cup.

Game of the day was the opening fixture which saw Killeigh Under 12 Girls renew their rivalry with Temple Villa in front of the large crowd that braved the cold weather.

Both of these sides have had many battles over the last two years and Saturday was to be no exception. Killeigh started the game brightly but struggled to break down a well organised Temple Villa defence who held their shape and kept their discipline very well.

Killeigh's midfield of Clodagh Rigney and Isabelle Mooney continued to probe but couldn't get any joy through the middle. Indeed Killeigh best opportunities came from wide areas with Aimee Gill posing a constant threat coming in from the right hand side.

Killeigh finally made a breakthrough when a long range effort from Leah Stack just managed to squeeze past the opposition goalkeeper.

That goal sparked Temple Villa into life and they started to come in to the game a bit more but met stubborn resistance in the form of Killeigh central defence of Aoife Jones and captain Louise Doyle. The game continued in end to end fashion with both teams creating opportunities in what was turning into a very attacking game, but it was Temple Villa who scored next to beat the impressive Mollie Dillane in the Killeigh goal.

Indeed Temple Villa had a number of chances but Dillane was equal to them all as the teams went into the half time at 1-1.

Killeigh came out strongly in the second half and gradually started to take control of the game thanks to the hard work of substitutes Farah Delaney and Katie Cuskelly.

It was the introduction of Cuskelly which gave Killeigh more of a creative threat from wide areas and creating space centrally for Leah Stack who gradually started to get the better of her opposite number.

Killeigh were unlucky not to take a second half lead when Ellen Cleary drew a save from the Temple Villa keeper following a lovely weighted pass off the left foot of Ailish Walsh. Temple Villa continued to look dangerous at times but couldn’t get beyond Louise Doyle and Farah Delaney at the back, and similarly the Temple Villa defence proved equally stubborn sending the game to extra time.

Both teams started the extra time nervously with the first 10 minutes petering out before the game came to life in the second period with Isabelle Mooney and Clodagh Rigney finding more space in the middle of the pitch.

First Leah Stack broke free only to be felled when it appeared she would be through on goal following a brilliant pass from Isabelle Mooney.

Sinead Walsh then went close with a long range effort which narrowly missed the target before Mollie Delaney again produced another fine save from a Temple Villa attack.

No doubt the coaches' thoughts were heading towards who would take the penalties when Leah Stack scored the winner with only seconds remaining to send the large Killeigh crowd in to raptures.

Victory sees Killeigh crowned SFAI South Leinster Champions and allows them to progress to the last 32 of the SFAI National Cup where they face Gorey Rangers in the next round.