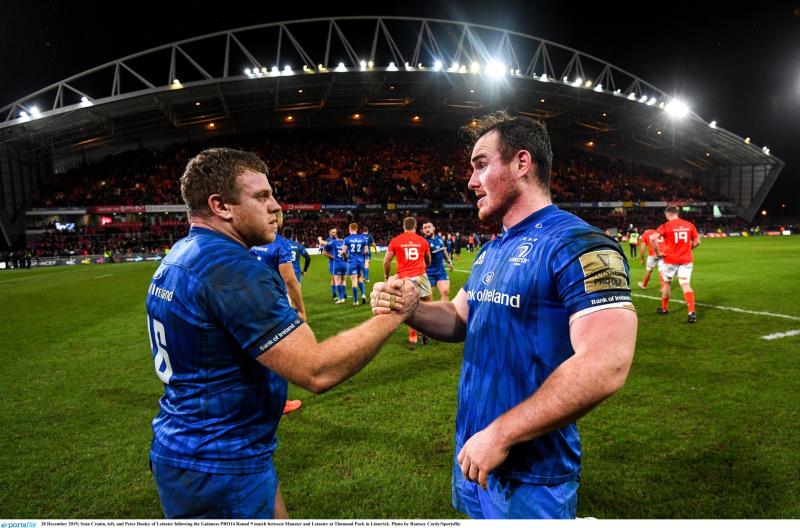 Offaly man Peter Dooley will hope to make an appearance from the bench for Leinster this weekend as his longtime teammate Sean Cronin looks set to mark 200 caps for the province.

Despite also starting on the replacements bench, it'll be a notable evening for hooker Seán Cronin who is in line to make his 200th appearance for Leinster Rugby.

Cronin made his debut for the province against Edinburgh Rugby in October 2011 and has been a mainstay in the side ever since going on to win two Heineken Champions Cups, a Challenge Cup and six URC titles to date.

He has also scored 43 tries in a blue jersey, that tally putting him at seventh in the club's overall try-scoring list.

Luke McGrath will lead the side out at the RDS while Ross Byrne will partner him in the half-backs.

Harry Byrne gets the nod in the centre where he'll link up with Jamie Osborne as Jimmy O'Brien returns to the number 15 jersey.

Jordan Larmour and Dave Kearney provide O'Brien's support on the wings, the former being one of three players in the starting lineup released from Ireland camp for the fixture.

Another of those coming back into the fold from international duty is Cian Healy who slots into a front row that also contains James Tracy and Michael Ala'alatoa.

Ross Molony and Ryan Baird will pack down behind them with Martin Moloney, Scott Penny and Max Deegan all retaining their places in the back row from the win over Edinburgh last Friday.

On the bench, there are welcome returns to the matchday squad for Thomas Clarkson, who hasn't featured since this fixture in March 2021, and James Lowe who picked up a muscle injury last month.