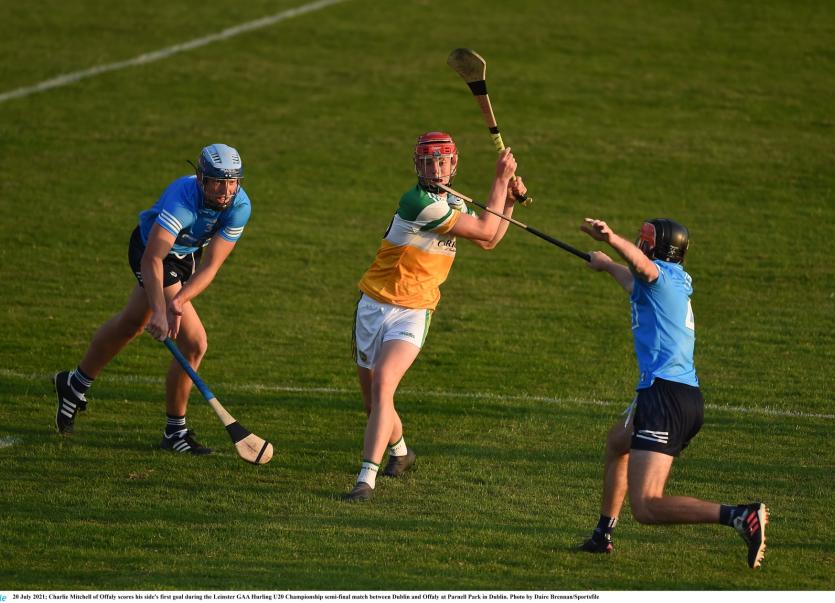 OFFALY almost snatched a sensational victory from the jaws of defeat when they lost to Dublin in the Leinster U-20 Hurling Championship semi-final in Parnell Park, Dublin on Tuesday night. Offaly staged a terrific recovery to come from nine points down and they had a great chance of forcing extra time at the end with Luke Egan not properly catching hold of the ball as he raced in on goals from the right hand side.

Gallant defeats and hard luck stories are no good to Offaly hurlers and footballers as they bid to rise to another level but this side can take great solace in the way they performed in a heartbreaking defeat.

Offaly were very close to forcing extra time or even snatching a famous win in a game in which they looked in danger of heading to a heavy defeat at one stage. Behind by 1-5 to 0-1 after just seven minutes, Offaly eventually paid a dear price for that dreadful start and their failure to come to terms with flying Dublin forward Dara Purcell until the second half.

Purcell got 1-3 from play in the crucial opening salvo and all of his 1-5 came in the first half as Dublin led by 2-9 to 0-8 at half time. Dublin were full value for their lead at that stage and Offaly were living on their wits to a fair degree, despite improving as the half wore on.

Dublin led by 2-13 to 0-10 at the three quarter way mark and there was no real danger on the horizon even though it was now clear that they were no great shakes. Offaly had upped their work rate, intensity and tackling in the second half and suddenly Dublin looked fragile. They missed a couple of chances and their touch left them under pressure as they began to spill ball. Still a nine point lead looked more than sufficient to get them home but Offaly staged a terrific closing quarter.

Charlie Mitchell got a goal and the Offaly subs made their presence felt. Cathal Kiely, Ronan Cleary and Niall Lyons all asked serious questions of Dublin in the second half, getting scores from play with Cleary and Kiely also converting frees. The Dublin defence creaked at the knees and Offaly had it back to a point with a minute of normal time left, 1-15 to 2-13.

Unfortunately they couldn't get on terms and Dublin got the final two points but Offaly could still have forced extra time. They had a great chance right at the death as Luke Egan, who had played well at wing forward, particularly in the first half when Offaly were on the back foot, advanced on goals. His shot didn't have the required power and a relieved Dublin cleared the lines.

It was a very close run thing and Offaly could have qualified, even if they would have been taking it against the head. It was good to see them so competitive and there was no shame in defeat. Dublin were the better team and it took Offaly too long to find full momentum but when they did, they were more than a match for the winners. They made them look very vulnerable and the game was there for the taking inside the final few minutes.

It is a credit to Offaly that they were so close considering how poor they were early on and the fact that they trailed by nine with fifteen minutes left. Offaly could have been a bit closer at that stage and missed a few chances as well as conceding two soft first half goals but they were clearly second best.

Dara Purcell was the best player on the field, lightening up the first half with some excellent attacking play but Dara Maher really came into his own in the second half as he kept a tight reigns on him. Padraic Watkins was outstanding in an Offaly defence where Killian Sampson and Conor Hardiman also did well.

Cian Burke put in a tremendous shift at midfield while Jack Screeney worked hard beside him – Screeney found the range well with frees though he will be disappointed with a couple of his misses. Free taking was a bit of an issue for Offaly as Screeney, Cathal Kiely, Ronan Cleary and Screeney again all took placed balls at different stages, though most of them were converted.

D.J. McLoughlin had a decent first half in the attack but overall, the starting Offaly forwards didn't play well enough and it took the introduction of Kiely, Cleary and Lyons to spark them to life – Kiely had returned after a long battle with a groin injury and while he wasn't fully fit, he was a real menace and gave Offaly a new focus when moved into full forward – Kiely couldn't get away from opponents as he normally would but Offaly were a different team with him on the field. Cleary and Lyons also began to run at Dublin and it almost led Offaly to a great come from behind win.

Offaly made a nightmare start as Dublin came flying out of the blocks. The home side had 1-3 on the board inside four minutes as a shell shocked Offaly were struggling for air. The goal came from Dara Purcell after a bad mistake by goalkeeper Adam Fitxgerald who left the ball behind him as he came out for the ball.

Purcell was on fire early on and the Offaly defence couldn't cope with him. Purcell got 1-3 from play as Dublin led by 1-5 to 0-1 after seven minutes. Fortunately Offaly settled after this with Jack Screeney finding the range from frees. He got Offaly's first four points from frees as well as missing his easiest one while their first point from play was a great D.J. McLoughlin score in the 14th minute.

Offaly were much better now though Dublin had chances. Purcell hit the post with an instinctive point shot while Liam Dunne hit the side netting with a half goal chance. Offaly were behind by 1-5 to 0-6 at the water break and they were very happy to be in that position after that opening few minutes.

Offaly continued to battle with everything they had in the second quarter but Dublin remained the better team. The concession of a 24th minute goal was a dreadful blow to Offaly. It came just after Jack Screeney had missed a free he would usually convert and Dublin broke into attack. Padhraic Linehan was adjudged to have been fouled by Dara Maher and Ciaran Foley converted the penalty with Fitzgerald almost keeping it out.

A Screeney free and Cian Burke point from play had Offaly just four points behind, 2-6 to 0-8 after 27 minutes and that was no bad position for them to be in. Dublin, however, got the final three points of the half, two of them from the flying Purcell – the first one was almost a goal as his close range shot just floated over and then he got a beaut from play to give Dublin a 2-9 to 0-8 half time lead.

Dublin continued to impress as the better side in the second half even if they displayed a very vulnerable underbelly. They had a couple of very bad wides from play with Darragh Power and Donal Leavy missing easy chances but they still kept the scoreboard ticking along.

Offaly had introduced Cathal Kiely at half time. Kiely had come back after dealing with a groin injury and he took over the free taking duties, finding the range with a couple in the first fifteen minutes but also missing a “65” - that “65” came after Tom Dooley had a good goal chance for Offaly but his shot was saved by Ben Hynes in the 42nd minute.

A Joe Hoctor free left Offaly trailing by 0-11 to 2-13 at the second half water break and they were hanging on by their finger tips. A 48th minute Charlie Mitchell goal transformed Offaly – Mitchell drove to the net after good approach play by Niall Lyons and suddenly Dublin were creaking. D.J. McLoughlin failed to get hold of a goal chance but the half cleaerance fell to Joe Ryan who drove over the bar to make it a four point game.

Joe Hoctor reduced it to three and Offaly were now winning all the battles. Cathal Kiely cut it to two with four minutes left and Jack Screeney missed a great chance to really turn the screw from a free that he won. Niall Lyons and Cian Boyle swopped points as it went into six minutes of injury tie and Dublin clinging to a two point lead. Offaly couldn't manage another score as Foley's “65” after Adam Fitzgerald made a fine save from Cian Boyle got a very relieved Dublin across the line.

Dara Purcell (Dublin): Dara Purcell was the main reason Dublin won. He scored 1-3 early on, 1-5 in the first half and he was brilliant in the opening thirty minutes. He was much quieter in the second half but a lot of damage had been done.

Offaly had a great chance of forcing extra time right at the end of injury time with Luke Egan getting clear sight at goals but his shot wasn't clinical and Dublin kept it out.

A mixed bag by Wexford man Gearoid McGrath. He was steady for the most part but there were a few soft frees on both sides. Offaly were annoyed at some that went against them while they were on the receiving ones of a couple of handy ones as they began their second half fightback. Overall, these decisions probably balanced out and he kept a tight grip on the game.

Offaly also struggled in the first half against Kildare and it was the same here. Ultimately, that poor start was the reason they bowed out.

Parnell Park was in fine position, Dublin GAA were excellent hosts as normal and a small but lively crowd enjoyed the evening.

Dublin play Galway in the Leinster final while Offaly's season is over.