Greyhound news round-up from the Midlands

Gone to the dogs 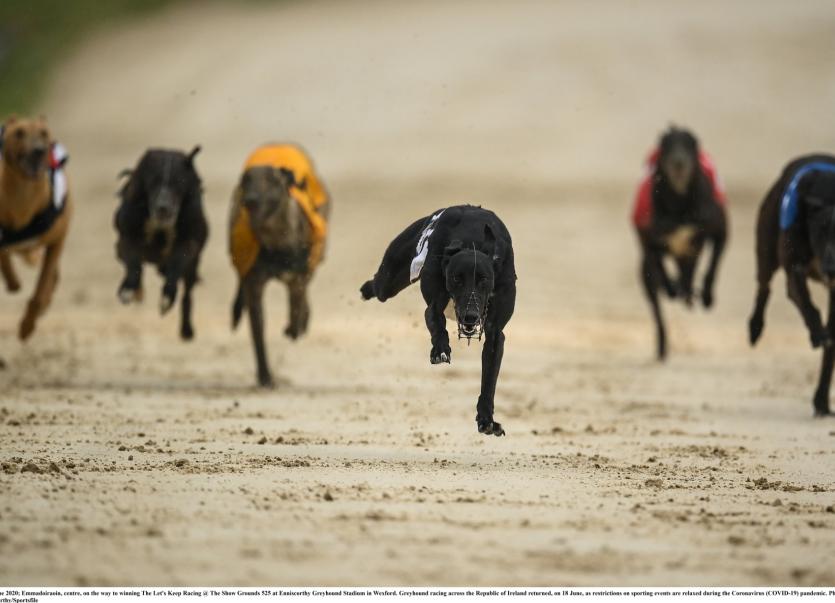 In a week that promised so much with four Irish dogs going to traps for the final of the English Derby, alas it was not to be, as the English two  dogs returned in first and second. However we had  the  usual sweepstake winners and quality Offaly winners, it still proved to be another vintage week of racing.

In Enniscorthy, on Monday week, in the semif-inals of the Soul and Cushie Jet unraced ON2 stake, three heats, with two qualifying from each for Mondays final. Saunders Impact was once again fastest, winning in 29.09 (20 slow) for Matt Owens. Coolbunna Frank won the next for David Morris in 29.46 (20 slow) and the final heat going to Ardera Madison for Seamus Begley in 29.72 (20 slow).

In Mullingar, also Monday, two Offaly winners, in the semi-final of an A8 Sweepstake, Lahinch Millie won the first for Clara owner P.J. Cleary in 29.91 (60 slow), by a head, at 4/6. In the semi-final of an S4 400 yard stake, Coolree Speck was first past the post in 21.95 (20 slow) at 5/2 for Daingean owner Eugene Glennon. Sadly no other Offaly winner during the remainder of  the week.

In Kilkenny, in the semi-finals of the Sports Information Services A1 stake, Jacob Tashadelek once again set the standard when winning the first in 28.70 (30 slow) by five lengths at 5/4 for Con Guiney. The second semi went to Trap Joey in 29.05 (30 slow) by a short head at 5/2 for Karen Murphy.

One Offaly winner in Shelbourne Park, in an A1 575, Glendalough had his fourth career win for Ballinagar owner Liam Kirley in an eye catching 31.04, by two lengths, at even money.

The first big final of the week took place in Tralee, a fine line up for the Ballymac Anton at stud quad distance over the 570 trip this time. Hollyhill Davy (Droopys Sydney- Castledargan) won the €4.5k first prize in 31.51 (10 slow) by a head at 4/1. A worthy winner here as he won three of the four rounds for owner Gerard Gubbins. Also in Tralee, the semi-finals of the Pestana at stud and Droopys Kennels Hospital A2 stake took place, Ballymac Luckily won the first for local trainer Liam Dowling in 28.61 by three lengths at 6/1. The second semi was faster as Cashen Harbour stopped the clock in 28.43 by a neck at 6/4 favorite for Chris Houlihan.

Limerick hosted the semi-finals of the Michael Tobin Memorial A4 sweepstake, Ballyea Sydney won the first for Clare trainer Tom Flanagan in 28.88 by five lengths at 11/2. The second semi went to Full Trottle for Morgan O’Neill in 28.71 by four lengths at 2/1.

In Shelbourne Park, two quality semi-finals took place, the first was the Shelbourne Champion 550 stake, the first heat was won in a special time of 29.07 by Ballymac Ariel, by six lengths, at even money for Liam Dowling. This daughter of Ballymac Bolger will surely have a big say when the derby comes around. The second semi was also won in fine style by Deadly Destroyer, in 29.24, by six lengths at 7/4 for Stradbally trainer Karol Ramsbottom.

The other stake of note was the semi-finals of the Corn Cuchulainn, Graham Holland’s prolific winner Bockos Brandy once again set the fastest time when crossing the line in 41.28, by one length, at a decent price of even money. The other semi was won by Ballymac Wisdom for Dowling in 41.54 by a short head at 3/1.

In Thurles, the first round of the 2021 Centerary Agri Tipperary cup was the highlight of a decent card, this valuable stake was won last year by Riverside Leo for Holland. The fastest of the six  first round heats was Cabra Ava in 28.93 (20 slow) by three lengths at 4/6 favorite for Miss Ava Scally.

After six weeks of brilliant racing in Towcester, where one hundred and ninety two dogs set off in pursuit of the Star Sports and TRC English Derby, runners were whittled down to six for Saturday’s final.

Four of the dogs were Irish trained and hopes of retaining the trophy were certainly high. Unfortunately it wasn’t to be as the two English dogs flew the traps and with the Irish dogs all getting tangled up they got a clear run to the line. The winner was Thorn Falcon, son of the great Dorotas Wildcat who won this prestigious trophy just three years ago. The winner was trained by Patrick Janssens, and as this was his first derby, to win the £175k first prize was some bonus. This young dog was Irish born and was sold to England after the first round of the Future Champion Unraced Stake in Enniscorthy in May. Anyone with Dorotas Wildcats pups must certainly be looking forward to getting them to the track after Saturday’s result. All in all It was a great derby especially and the pleasure the Irish dogs gave us during the heats, it wasn’t to be on the night. However we’ll try again next year and see what happens.

Three Offaly winners at the matinee in Mullingar, two for Moneygall owner Mary Jones and one for Clara owner P.J. Cleary.  First two were for Jones as Lingrawn Brandy won an A2 race in 29.68, by four lengths, at a decent 7/1. Mary’s other winner was Lingrawn Buster in an A4 contest, in 29.78 by one length, at 11/2. Cleary’s winner was an impressive one as Lahinch Coco won an A6 grade, in 29.85, by six lengths at 7/2. All races in Mullingar were rated .60 slow.

Liam Kirley’s Glendalough is an obvious choice this week having won an A1 575 in Shelbourne on Friday in a rapid 31.04 by two lengths.

There were six Offaly winners this week. Congratulations to all involved.