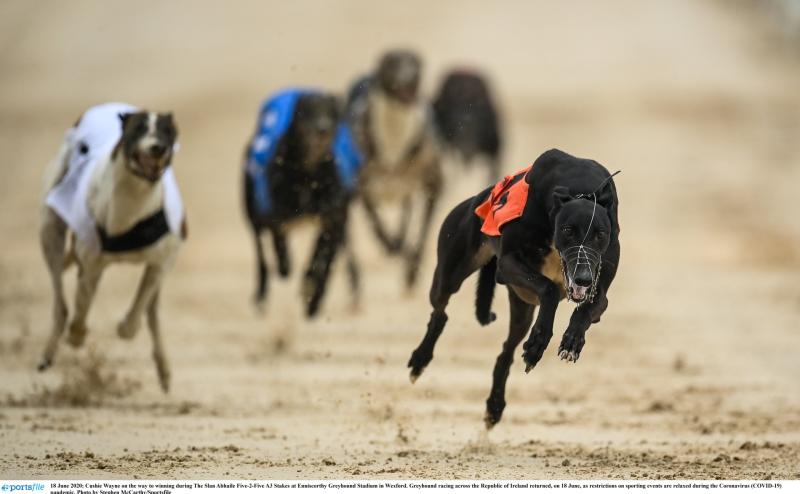 For the third week in a row, the English Derby dominated the weeks racing across the Irish Sea. However the final of the Irish Oaks in Shelbourne proved to be one of the most exciting races in years. Some top class Offaly winners to boot, all in all, another fantastic seven days of racing.

In Tuesday, in Shelbourne Park, the first three races on the card were an ON2 unraced stake, with Highview Nial easily the fastest of the three for Croghan trainer Gerry Merriman in 28.74, winning by eight lengths at 2/1. In the semi-finals of the Joe Dolan /ICC Open sprint for greyhounds (bred for coursing) with two qualifying for Saturdays final. This stake was won last year by The Other Rory for Jennifer O’Donnell. Three good winners, Ballymac Rule in 18.68 and Ballymac Floral in 18.78, both for Liam Dowling and Crafty Magnifico for the Divilly Syndicate also in 18.78.

Limerick, on Thursday, hosted the final of the Peter Magnone Memorial A4 stake, Sporry Anna (Ballymac Vic- Effin Talent) was first past post and won €1.5k, in 29.09 by one length, at 7/4 fav for trainer John O’Brien. In Newbridge, in the semi-final of an A3 sweepstake, Kilcooney Limit was an impressive three length winner, in a fast 28.77, by three lengths at 3/1 for Geashill owners Thomas and Marie Garry.

Sadly no Offaly winners anywhere on Friday. In Kilkenny, in the semi-finals of the Sports Information Services ON2 stake, Asian Prophet won by two lengths at 6/4 in 29.24 (30 slow) with Owen McKenna training. Beaming Scarlet won the second for Corona Ryan in 29.73 (30 slow), by one length, at 3/1.

In Tralee, in the first round of Ballymac Anton @ Stud  stake being run over four different distances with first round over 500 yard spin. Seven heats, with Sir Man going fastest in 27.50 by a neck at 5/2 for Brendan Murphy. Next week’s quarter-finals will be over 525 yard trip.

It’s was another night of quality racing with over €50k being brought home in prize money. Alas, yet again no luck for any Offaly dogs.

In Curraheen Park in Cork, in the first round of the Denis Linehan Solicitors open unraced stake, three heats with Dromana Bucko going fastest for Mark O’Donovan in a smart 28.22 (10 fast) by eight lengths at 4/7. This stake in 2020 was won by Deadly Destroyer for Stradbally trainer Karol Ramsbottom.

Limerick hosted the semi-finals of the Widdess Fitzgibbon Pharmacy Treaty Cup open sprint. Two outstanding winners with Skylight Blake winning the first in 18.54 by four lengths at 1/1, for Nicholas Walsh and Seomra Nate. The second was won for Chris Houlihan in 18.46 by three lengths at 11/10.

Waterford had one final worth €1.2k to the winner. Ashwood Ziggy (Good News- Bogger Bonnie) won the Grange Road Gallop And Greyhound Extreme 525, in 28.95 by five lengths at 1/1, with local trainer Declan Byrne parading.

In Tralee, in the final of the SIS Race Of Champions, last weeks track record breaker Explosive Boy (Good News- Delightful Girl) once again showed his class when winning by three lengths, in 29.36, at a generous 4/6 for Pat Guilfoyle. His €15k first prize has now brought his career earnings to over €38k. We can only presume Shelbourne Park will now be on this dog’s agenda and the Irish Derby. Buttys Bengal was second for Gerry Holian and won himself €4.5k.

Shelbourne was sold out to supporters from early in the week for the final of the Sporting Press Online Edition Irish Oaks but obviously to a reduced attendance. It proved to be a cracking final and a very worthy winner as Susie Sapphire (Droopys Jet- Jetstream Lynx) pinged the lids and made every yard to win in a superb 28.15, by five lengths at 3/1, for trainer Owen McKenna and Newbridge owner Peter Comerford. The €25k first prize Saturday and the Puppy Oaks she won in May makes Sapphire one of a few to deliver this double. For the owner Peter Comerford he has spent a lifetime in dogs and has never been afraid to put his money down, both as a sponsor and purchasing dogs and this is a well deserved win. Scooby Princess was second for Jennifer O’Donnell and won herself a cheque for €7.25k.

The final of the Joe Dolan/ICC coursing open sprint was on the supporting card, Ballymac Rule (Newinn Wonder- Ballymac Town) showed his class, when winning his eleventh race from twelve starts in 18.71 by three lengths for Liam Dowling. His litter brother Ballymac Floral was second, also for Dowling.

After the third round of the English Derby, eleven of the twenty four dogs remaining are Irish. There were wins for Knocknaboul Syd, reigning champion Deerjet Sydney, All About Ted  and Ballymac Fairone. It was a satisfactory session for the Irish dogs with Graham Holland having two remaining in the contest, Liam Dowling, Pat Buckley and Brendan Mathews also with two, Robert Gleeson, Peter Cronin and Paul Hennessy with one each. At time of printing the top two in betting with leading bookmaker Paddy Power were both Irish, with last year's champion Deerjet Sydney 9/2 favourite and Knocknaboul Syd at 6/1.

There were three Offaly winners at the matinee meeting in Mullingar. First two winners were in A6 contests as Lahinch Coco won for Clara owner P.J. Cleary in 30.20 by six lengths at 6/4 favorite and the second going to Weather Maker in 29.93 by four lengths at 5/4 for Ballycommon owner Peter Raine. Our last winner of the week was Fahy Polly for Paddy McCormack in an A2 race in 29.55 at 10/3. This was Polly’s seventeenth win and has proven to be quite the money maker for Paddy. All races in Mullingar were rated .50 slow.

Kilcooney Limit was a three length winner in the semifinal of an A3 sweepstake in a splendid 28.77 in Newbridge on Thursday for Geashill owners Thomas and Marie Garry and is a well deserved winner of this weeks accolade.

There were eight Offaly winners this week. Congrats to all involved.