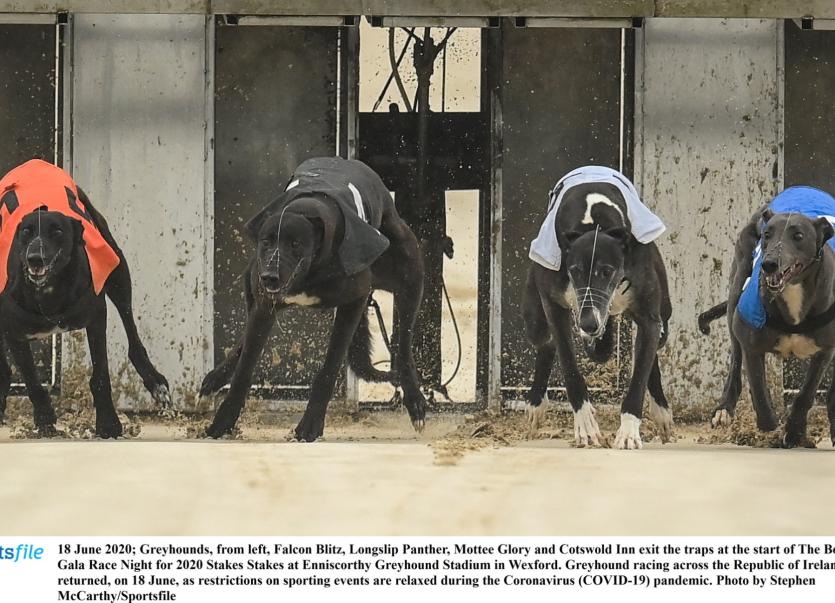 Over €50k in prize money  and some very smart Offaly winners to boot in an exciting week of racing. We welcomed back racing to Drumbo Park in Lisburn on the edge of Belfast after a four month sabbatical.

In Enniscorthy, in the second round of the Elite Canine Genetics Unraced stake, six heats with top class runs in all. Fastest of the six was Sovereign Boy in 28.87 (20 slow) for local owners Michael Organ and Michael Egan.Tuesday, in Shelbourne Park, in an A4 contest, the well bred  Scripture was three length winner for Tullamore owner Willie Delahunty in 29.19. Thursday, in Newbridge, in an S8 sprint, Coolree Speck just got up on the line to win by a head in 18.15 for Daingean owner Eugene Glennon.

The first big final of the week was in Kilkenny, the Kilkenny Track Champion Open Unraced sweepstake, won last year by Deadly Samurai for Stradbally trainer Karol Ramsbottom. The €10k first prize went to Serene Ace (Scolari Me Daddy- Boleys Ace) in a fast 28.98 ( 30 slow) by four lengths. This Mark O’Donovan trained dog looks to have a bright future as the winner of this stake normally progresses to be very competitive in future Classics. Grangeview Mac was second for Lorrha owner Michael Hogan and was the recipient of a cheque for €3.5k.

In Shelbourne, in the final of an A2 575 sweepstake, Bit View Vinny ( Droopys Cain- Russanda Vicky) won by a neck in 32.04 (20 slow) with the €1.2k prize going to Slane trainer Martin Lanney. In the first race on the night, Artax was a one length winner for Edenderry owner/trainer Paul Cronin in 29.51 in an A4 grade.

Clonmel staged the semi-finals of the Larry O’Rourke National Produce Stakes, two very good winners and some battle ahead expected in Saturday’s final. Explosive Boy won the first for Pat Guilfoyle in 28.58 by eleven lengths and Good Cody the second for John Kennedy in 28.09 by three lengths. The trap draw had six inside seeds in it and favoured Explosive Boy as he got the red jacket in one while Good Cody got trap five.

In Cork, in the quarterfinals of the O’Leary Driving School Novice 750, Silverhill Karen went fastest for Graham Holland in 41.31 (30 fast) winning by a staggering fiftheen lengths.

Limerick hosted the quarter-finals of the Greyhound and Petworld Golden Muzzle A1 550 stake. For the second week in a row Meduza was fastest for John Byrne in 29.88 by six lengths.

In Shelbourne Park, in the second round of the Sporting Press Online Edition Irish Oaks, Billys Diva was fastest of the eight heats in a rapid 28.18 by six lengths, again for John Kennedy. Last years winner Ballymac Beanie was next fastest on the clock in 28.29 by five lengths for Waterford trainer Declan Byrne.

The Lee Strand A1 550 final was the highlight of a good card in Tralee. There was a shock on the night as Dromulton Pilot (Laughil Blake- Ballymac Andwhy) hit the high note on the right night to win the €7k first prize, by three lengths, in 29.84. For Clare trainer Pat McMahon this is probably his greatest success in his training career. Second place went to Realism for Daniel O’Reilly and won himself €3k.

Two Offaly winners at the matinee in Mullingar, in an A3 contest, Lingrawn Elody won by five lengths in 29.91 (70 slow) at 7/4 for Moneygall owner Mary Jones. Our final winner of the week was for Paddy McCormack as his prolific winner Fahy Polly had her eighteenth career win in 29.72 (70 slow) by four lengths at 3/1.

Saturday, final of the Larry O’Rourke National Produce stake, semi-finals of the Novice 750 in Cork, semifinals of the Greyhound and Petworld Golden Muzzle 550 in Limerick and quarter-finals of the Irish Oaks in Shelbourne. The English Derby also kicks off this week with one hundred and Ninety two dogs competing in their respective heats on Thursday, Friday and Saturday over in the tough Towcester track. Forty Irish dogs are entered for the first round and hopefully we’ll have another successful campaign.

Paddy McCormack’s Fahy Polly get the nod this week having won in Mullingar on Monday and then again on Sunday, both in the competitive A2 grade. To run twice in a week is tough but to win both times deserves this accolade.

There were just eight  Offaly winners this week. Congratulations to all involved.