The latest news and results from the kickboxing club 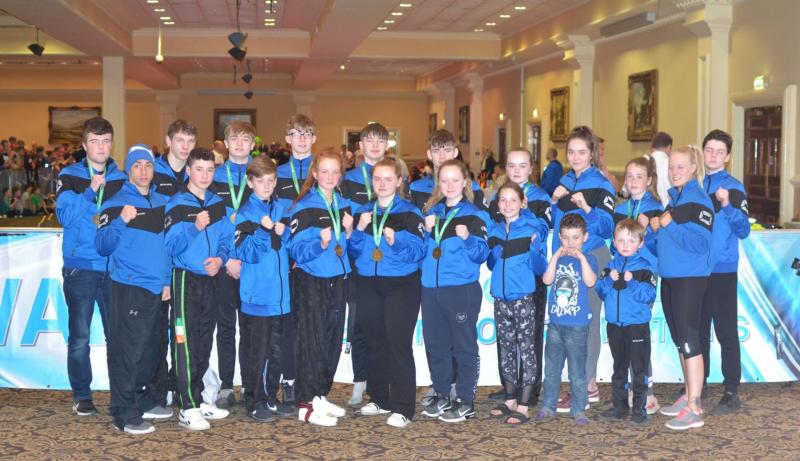 Team Hurricane returned to Edenderry last Sunday with a Perfect 10, 10 Gold medals not to mention the 8 Silver and 1 Bronze for good measure. This was not any tournament but Kickboxing Ireland’s (KBI) National finals, Team Hurricane are members of KBI which is the National Governing body for Kickboxing on the Island of Ireland and is the sole representative of the World Association Of Kickboxing Organisations(WAKO). KBI are the only Kickboxing body recognised by the Irish Sports Council. The national finals are usually over 2 weekends for seniors, to be national champion you must win on both dates, Juniors (U19), Older Cadets (U16) and Younger Cadets (U13) need to win their section at the national final to be champions. Due to the number of competitors the event was split over two days at the magnificent Citywest Hotel; Saturday for Ringsports, Light Contact and Kick Light; Sunday was dedicated solely to Point Fighting.

Saturday was a relatively quiet one for Team Hurricane with 2 registered fighters. Both Luke McCann and Dylan Whelan were in the same sections - 52 Kg Older Cadets in light contact and kick light. As is the stature of these 2 talented fighter the inevitable happened and both finals were all Hurricane affairs with Luke McCann taking both titles, the kick light final by a split decision, Sunday saw both fighters contest the final in point fighting also with the same result.

With senior Claire Brennan falling to current world champion Karyna Nikitina in the -65 Kg section, Lauren Grant took the Gold in the +70Kg section and must now fight off with Emma Flannery for the title as will Jay Daniels who due to illness could not fight and will meet Jordan White in June for the decider. Brandon Tait looked down and out in his quarter final of the junior -69 Kg section, a problem ankle injury recurrence saw him in serious discussions with the medical team. Brandon is made of sterner stuff and got up to win his match and the semi final and final with ease, fellow Hurricane Rhys Ferriday taking bronze in this section also. Younger brother Nathan Tait made it yet another family double with victory in the junior -57Kg, his seventh straight national title.

Seán Kelly took the junior -84 Kg section and Chad Brennan lost out in the final of the -74 Kg section to take silver. Alex Keyes also took a silver in the -28Kg Younger Cadet section, finally Alex Gillen and Luke Kelly lost their quarter finals both by the narrowest margins, a single point over two rounds, some consolation in that the defeats were to the overall section winners.

Another full weekend of top class refereeing by Darren Tait, coaching by Jay and Claire and support from the Hurricane parents, thanks everyone. Jay Daniels was really under the weather for this tournament and spent a couple of days in hospital shortly afterwards but is now well on the road to recovery. Plenty of success also for former Hurricanes with Jordan Doran taking three national titles, Conor McGlinchey taking both Junior and Senior titles and Naoise Colvin winning also.