Tullamore keep clean sheet as they see off Glenville 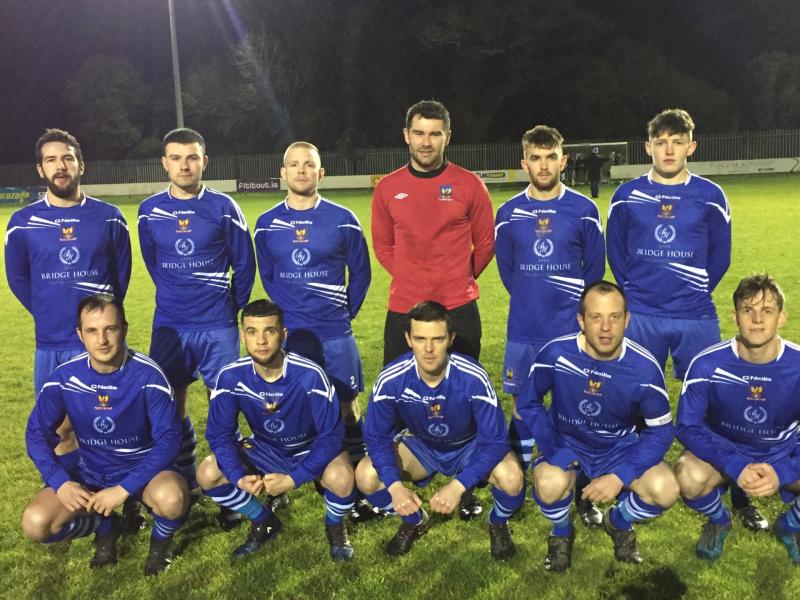 Tullamore returned to the top of Division 1 following this impressive win against Glenville FC in Leah Victoria Park last Friday.

While the visitors played well, their lack of a cutting edge up front ensured that Town were never in any serious danger of dropping points in what was a very entertaining game.

They began brightly with Enda Carroll playing the ball through to Shane Dolan but Paddy Whelan did well to gather in the Glenville goal. With 15 minutes gone they hit the front when Carroll picked out Brian Francis and his cross was fired home by Shane Dolan from close range. Dolan was again in the thick of the action when he was taken down and Kevin Williamson’s quickly taken free kick flew inches outside the left post.

Shane Dolan nearly added to his tally on 20 minutes when he latched onto a through ball from Brian Francis, but he was denied by a great full length save from Whelan. Minutes later Shane O’Connell played a lovely ball through to Brian Gill but the keeper again came to his sides rescue with a superb point blank save.

Ryan Hughes tried to get his side back in the game but he was stopped in his tracks by Stuart Carroll but, with half an hour gone, Tullamore struck again. Shane Dolan picked out Enda Carroll 20 yards out and he drove his shot unerringly into the bottom right corner.

Great play by Anthony Kavanagh saw him fire the ball across the face of the goal while, at the other end, Rory Kelly threatened to break free but Brian Gill got back to cut out the danger. Glenville finished the half the stronger with Stuart Carroll doing well to clear a searching Stephen Holmes cross and then Gavin Shiels managed to knock Derek Doyle’s free kick behind as the interval arrived with the home side two goals to the good.

On the restart Glenville went straight into the attack with Gavin Shiels doing well to scoop Josh Clifford’s dangerous free kick to safety. Tullamore quickly hit back as Brian Francis picked out Anthony Kavanagh on the right and his low cross was hacked clear by Ciaran McDonnell but, with an hour gone, they were reduced to ten men when Stephen Francis received a second yellow card.

Despite their numerical disadvantage they continued to press with Stephen Holmes managing to get back to cut out Brian Francis’ surging run on the right while, at the other end, Derek Doyle sent Rory Kelly through but Shane O’Connell got across to clear.

The introduction of Macdarragh O’Neill on 70 minutes added significantly to Glenville’s woes and he was straight into the action when he was taken down on the left with Kevin Williamson firing the resultant free kick narrowly over. O’Neill again created panic when he latched onto an attempted clearance but he was denied by a tremendous last ditch tackle from Philip Duffy.

With Kevin Minnock coming on Tullamore continued to press as Brian Norris and Brian Francis combined to pick out O’Neill, but the visitors were again alive to the danger as David Keogh got across to clear. With 10 minutes remaining they conjured up a goal of real quality when good play by Williamson and Francis sent Macdarragh O’Neill through on the right and he expertly lifted the ball over the advancing keeper and into the far corner. Glenville tried to get back in the game with Emmet O’Brien firing over from distance but it was the home side that were calling the shots as Paddy Whelan brought off two great saves to deny both Macdarragh O’Neill and John Paul Casey.

With seconds remaining Kevin Minnock fired inches outside the left post as Tullamore laid claim to all three points.

There were many pluses to take home from this game, not least of which was the return of Gavin Shiels between the posts. The Tullamore 2nd team also played out a hugely entertaining 2-2 draw away to Birr on Sunday in the Combined Counties League with goals from John Paul Casey and Tim Molloy and a man of the match performance from Jack Goodings.

Manager Tony O’Sullivan will be well pleased with this win as he prepares his side for an away fixture this Friday against Glebe North and a crucial home game next Wednesday against Ballymun United. In what was a great team performance there were excellent contributions from Shane O’Connell, Enda Carroll and Brian Francis, but the man of the match award went to Tullamore’s outstanding central defender, Brian Gill.