Gone to the dogs: Good week for Offaly greyhounds 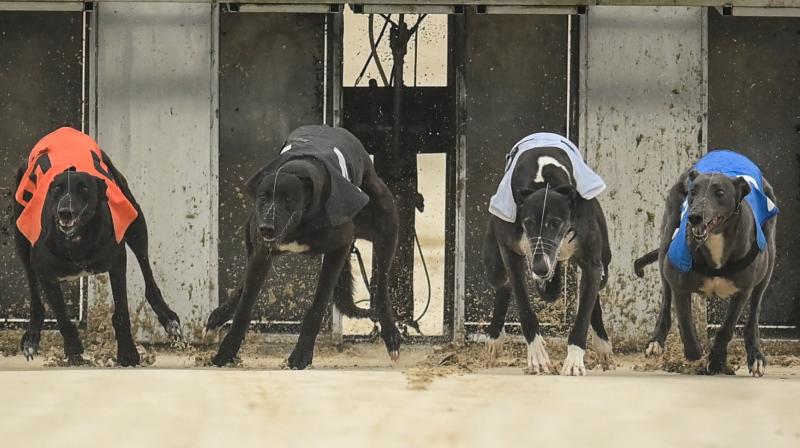 Expect great excitment over the next six weeks as Irish dogs travel in force in the hope of an English Derby title. Hopes are high with possibly the strongest Irish team in years going across with a great hope to bring home the trophy and first prize keeping up the standard Irish dogs have set over the last decade. On home ground the first round of the Irish Oaks in Shelbourne was the star attraction in another brilliant week of racing this week.

In Enniscorthy, in the second round of the Kanasef ON2 unraced stake, eight heats, with two standout performances. Rays Boy for Pat Whelan in 29.09 (20 slow) won by nine lengths and Never So Bold for John Simpson and John Kavanagh won in 29.11 (20 slow) by seven length.

First Offaly winner of the week was in Galway, in an S7 350 sprint, Killeshill Star had his first win in fourteen starts in 19.96 (10 slow) by one length at 4/1. In Kilkenny, in the semifinals of the Champion Open unraced stake, Another Holiday again set the pace and remains the only unbeaten dog in the stake winning in 28.71 (20 slow), by one length, at 4/5 with Michael O’Donovan training. The second semi went to Bogger Bible for Liam Peacock in 28.98 (20 slow) by five lengths at 7/2.

Four Offaly winners on the supporting card, in the first race on the card, an A3 grade, Wee Castle won in 28.66 (20 fast) by nine lengths at 7/4 with Edenderry trainer David Hanlon at the helm.

In the final race on the card, Glenquain Pat had his ninth career win for Ballinagar owners Damien Cunningham and Liam Kirley in 28.59 (20 fast) by a head at even money.

Tralee staged the semi-finals of the valuable Lee Strand A3 550, Tullig Cyrname remains unbeaten in this stake and his career having made it six wins from six starts in 29.78 (20 fast) by nine lengths at 4/6 fav with Pat Buckley training. The second semi went to Ballyroyal Gatti in 29.96 (20 fast) by one length at 9/2 trained by John Kelleher.

Curraheen Park in Cork held the semifinals of the Dan and Sheila Buckley memorial A2 525, two cracking semifinals with only half a length separating the two winners. Giddyupgonzo won the first for Pat Kiely in 28.72 (10 fast) by one length at 4/5 fav. The remaining semi went to Bartlemy Jas for local trainer Kieran Lynch, in 28.68 (10 fast) by two lengths, at 5/4 fav.

In Limerick, in the first round of the Greyhound and Petworld Golden Muzzle A1 550, five heats with Vincenzo easily the fastest winner,in 29.56 by seven lengths at 3/1, with Pat Guilfoyle the trainer behind this good winner. This stake was won last year by Blastoff Harry for Paul Hennessy. The only Offaly winner on Saturday night was in Mullingar as Castlehill Jo was an easy six length winner in a fast 29.72 (50 slow) at a well gambled even money for the Euro-Dollar Syndicate and Ballinagar trainer Iggy Daly.

In Shelbourne Park, in the first round of the Sporting Press Online Edition Irish Oaks, eleven heats with some serious times being registered. Last years winner and Irish Derby winner Susie Sapphire had no luck in running in heat six was was duly eliminated finishing fifth. Fastest on the night was Maries Wedding for Dolores Ruth who stopped the clock in a superb 27.99, winning by seven lengths at 2/5 fav. Not often the 28.00 barrier is broken in the first round of a stake and shows the quality of this young female. Next fastest on the clock was Annagh Lucy for Rachel Wheeler in. 28.10 by one length at 9/4. A double on the night for Liam Dowling plus all the usual top trainers getting a winner. Three Offaly bitches entered and all qualified for the next round, Highview Moment and Highview Venture for Gerry Merriman and Fahy Devine for Paddy McCormack. Lot of racing to be done in this stake yet.

Thirty two heats, one hundred and ninety two dogs went to traps for the first round of the Star Sports and TRC English Derby. Forty three Irish trained dogs all vying to qualify for the second round over last Thursday, Friday and Saturday. £175k to the winner after six weeks where speed, stamina and certainly luck are all needed to get their hands on this prestigious trophy.

Thursday, two Irish winners, the ever consistent Skywalker Barry for Michael O’Donovan and Da Bold Freddie for Peter Cronin. Another dog to do well was Lautaro for last year’s winning trainer Patrick Janssens who broke the track record at the Towcester track in 28.84. Saturday was a much better evening for the Irish dogs with seven winners. Ballinabola Ed set the standard on the night going fastest for Pat Buckley. The Tipperary trainer also had three other winners with Scarty Yank, LevBonite and Bobsleigh Dream. There was a double for Peter Cronin with Emilys Jet and Cape Cloud. Leading trainer Graham Holland also got in on the winning act with Part Blake.

Saturday, another six winners, all with a decent chance of outright winning. Six different trainers, first up was Barefoot Supremo for Paul Hennessy, then Deadly Showtime for Karol Ramsbottom, Bockos Vieira for Holland, Wide Open for Brendan Mathews, All About Ted for Peter Cronin and Ballymac Leon for Liam Dowling. Of the forty three Irish dogs that started, thirty two are still remaining heading into the second round. Pat Buckley has eight of these, Peter Cronin has five, with Paul Hennessy and Liam Dowling have four. All the other Irish trainers are still well involved. Long way to go still but hopefully the ball bounces our way.

Three Offaly winners at the matinee meeting in Mullingar. Lingrawn Billy won by nine lengths for Moneygall owner Mary Jones in 29.77 at 13/2. In an A3 grade, Beechgrove Lady extended her recent good run, when winning again in 29.67 by one length, at 5/2 for Ballycommon owner Peter Raine. Our final winner of the week was Lahinch Flash who won an A6 race in 29.56 by six lengths at 4/1 for Clara owners P.J. & Billy Cleary. All races at this meeting were rated .50 slow.

Two stakes getting to the business end in Clonmel on Sunday night, firstly, the the quarter-finals of the Kieran Purcell Memorial Guys and Dolls A3 stake, Courty Girl again set the standard as she did in first round when winning in 28.74 by one length for trainer John Byrne. Next up were the Quarterfinals of the Larry O’Rourke sponsored Irish Produce Stake, four dramatic heats all won by pup out of leading stud dog Droopys Sydney. First up was Radical Hero for Thomas O’Donovan in 28.63, then Gaston Pecas for Pat Buckley in  28.36, last week’s fastest winner Swords Rex in 28.23 and finally Droopys Nice One for Murt Leahy in 28.62.

Friday, final of the Champion Unraced in Kilkenny, final of the A1 Derby in Newbridge and final of the Lee Strand A3 550 in Tralee. Friday also sees the first of the second round heats of the English Derby.

Saturday, concluding nine heats of the English Derby, final of the Dan and Sheila Buckley memorial in Cork, quarter-finals of the Golden Muzzle in Limerick and second round of the Sporting Press Irish Oaks in Shelbourne. Sunday, semif-inals of the Guys and Dolls A3 stake and semifinals of the National Produce Stake in Clonmel. Loads of top class action to look forward too.

Saturday, concluding nine heats of the English Derby, final of the Dan and Sheila Buckley memorial in Cork, quarter-finals of the Golden Muzzle in Limerick and second round of the Sporting Press Irish Oaks in Shelbourne. Sunday, semifinals of the Guys and Dolls A3 stake and semifinals of the National Produce Stake in Clonmel. Loads of top class action to look forward too.

Flickofacoin was a two length winner in an impressive two length win in a serious 28.19 (20 fast) on Friday night  by two lengths for Edenderry owner Thomas Glynn. Well deserved.

Nine Offaly winners this week. Congratulations to all involved.