Three Offaly winners in fantastic week at the dogs 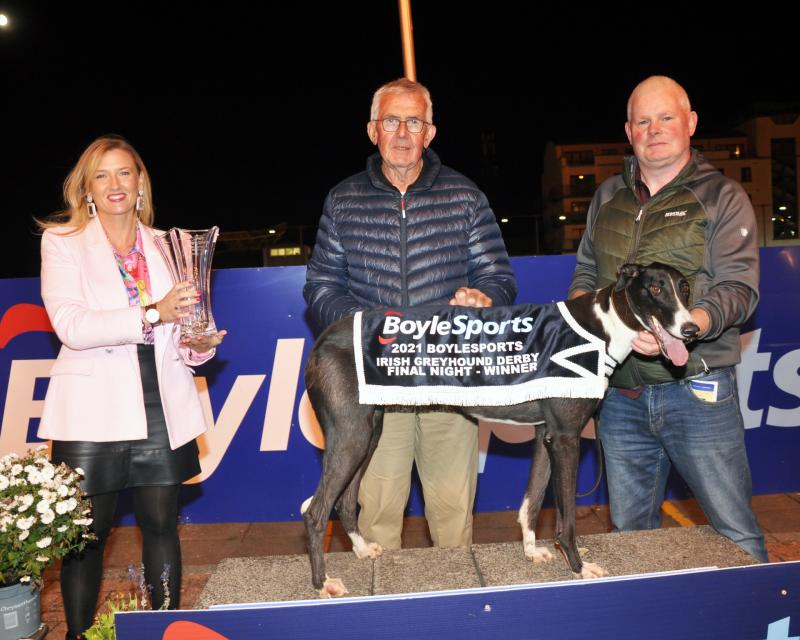 Pictured after “ Glendalough ” won the Best Odds Guaranteed On The . BoyleSports app 600 at Shelbourne Park. Sarah Kinsella with the owners, Ballinagar's Liam Kirley and Damien Cunningham.

After the exciting final of the Boylesports derby last Saturday, racing was back to a much calmer state this week.

Another of the great classics got underway in Cork, the Laurels. Sadly Offaly winners were scarce this week but when they happened we had a few decent ones.

We had to wait until Friday for our first winner most unusually there were no Offaly winners early in the week. In Shelbourne, in an A2 race, Highview Jewel had her seventh career win in 29.08 by one length at 3/1 for Croghan trainer Gerry Merriman. Also in Shelbourne, in the first round of an A2 sweepstake, where there were four heats, Grangeview Mags went fastest in 28.34 by one length at 2/1 for Lorrha owner Michael Hogan.

In Kilkenny, in the final of their biggest event of the year, the Kilkenny A1 derby, once again sponsored by Jag Building services and K.G.O.B.A took place. As usual a top class field. A shock result as Hollyhill Sonny (Kinloch Brea - Boom Time) stole a march on his rivals and was never caught in 29.20 (20 slow) at 10/1. The first prize of €9k went to trainer Paraic Campion. Paul Hennessy’s Hello Diamond was second and won himself €3k.

In Clonmel, in the final of the Killee Town ON2 unraced stake, the €1.2k cheque went to Fleeting Angle (Droopys Jet - Bewitching), in 28.95, by five lengths for Waterford trainer Declan Byrne.

In Curraheen Park in Cork, the entire card was taken up with the first round of the 2021 Irish Laurels. Twelve heats, with most of the dogs fresh from running in the derby over the previous few weeks. Seventy two dogs all trying to get their names on this famous trophy, won last year by Runninta Seeya for John Linehan. There were joint fastest heat winners on the night, both in 28.19, Skywalker Barry for Mark O’Donovan and Ballymac Wild for Liam Dowling. Runner up in the derby Singalong Sally was one spot slower when winning her heat in 28.20 for Pat Buckley. There was a double on the night for Buckley and Graham Holland. Long way to go in this stake yet.

In Limerick, in the first round of an A1 600 yard sweepstake, three heats with Yellow Brick having the best run for Mullingar trainer Francie Murray, in 32.52,  by three lengths at 5/2.
In Mullingar, one Offaly winner, Denise Rose won an A4 contest in 30.05 (50 slow) by two lengths at 2/1 for Tubber owner Joe Keyes. Thurles hosted the first round of the Kasco Food ON2 unraced, four heats with Boherna Sydney havingthe fastest time for local owner Frank Dwan in 29.26 (20 slow) by seven lengths at a well backed 4/5.

Some great racing in Shelbourne Park, in the second round of the SIS Juvenile derby. Six magical heats, all won in blistering times. Fastest on the night was Feora Chris for Con Guiney in 28.12 by two lengths at 4/5. Next fastest was Droopys Soldier for Rathangan trainer Robert Gleeson, in 28.15, by one length at 6/1. Twenty four dogs remain now all vying to take over from last years winner Skywalker Barry.

Only one Offaly winner at the matinee meeting in Mullingar, in an A6 contest Lingrawn Niamh was an easy six-length winner in 30.00 (60 slow) at 4/5 for Moneygall owner Liam Jones.

Highview Jewel gets the vote this week for Gerry Merriman, winning an A2 race in Shelbourne in 29.08 on Tuesday and winning three of her four last starts. Well done.