Tullamore lose out against struggling City of Derry 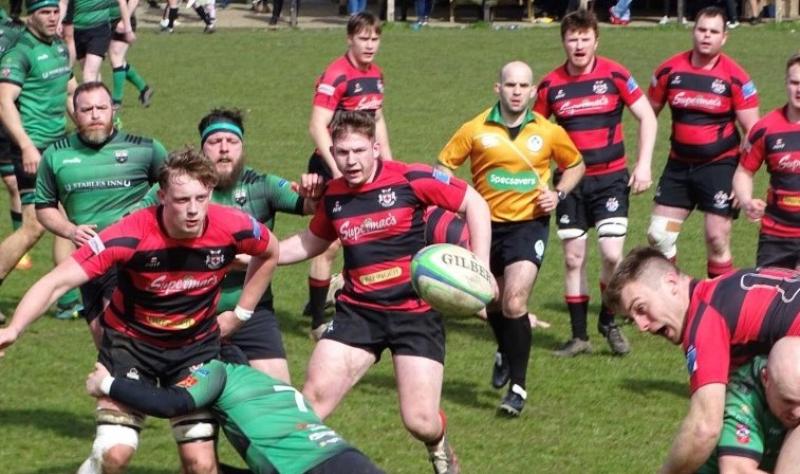 Tullamore attacking against City of Derry

Tullamore took part in a very entertaining fixture away to City of Derry last Saturday. Both teams were on different ends of the spectrum for this encounter. Tullamore had secured their play off spot 3 weeks ago. City of Derry needed results to go their way and a win to have a chance of avoiding the relegation play off.

The game had an explosive start, with both sides showing clear intent to move the ball at every opportunity. Tullamore struck blood with an excellent counter attack. Brian Geraghty claimed the ball in the middle of the field, he then drew in two defenders and slipped the ball to Lance Batten. Batten fired through the gap and chucked the ball out to Conor who ran in uncontested for the first score. Karl Dunne added the extras.

City of Derry replied minutes later with a long range try of their own. The side ran the ball from deep and their explosive outside centre barrelled his way through a gap and showed a clean pair of heals to finish under the sticks. Tullamore responded almost immediately with another try. From the kick off Tullamore regained possession, the forwards worked to the 5 metre channel. The two Dunne's and Batten spotted space on the blindside. Sam Burns whipped the ball to Batten, who then flicked to ball to Karl Dunne who then chucked the ball to brother Conor for a brilliant team score.

Once again City of Derry replied with 2 tries of their own to bring a bit of daylight between the sides. Karl Dunne knocked over a penalty late in the half to leave the half time score at 21-15.

Tullamore started the stronger of the teams in the second half, and Karl Dunne knocked over 2 penalties to level the game. City of Derry responded with a bang, and rattled 3 tries in the next 15 minutes. Tullamore were disappointed with these scores as they all came from opportunistic efforts rather than from sustained pressure.

Tullamore never died and showed some magic in the dying minutes of the contest. Jack Delahunt received the ball in his own half way line, and flung a 20 yard pass to rapid winger Zach Wright. Wright went onto to prance by his opposite winger, and rounded 2 more defenders to weave his way under the posts for an excellent individual try. City of Derry had the last laugh and scored the final try of the game at the death. The score finished at 48-29, and was played in true 7s style.

Sundays Well won their final game against Clonmel, which means that City of Derry and Clonmel will play the 2 legged relegation play off. Tullamore will now look forward to Saturday week, as will they travel to Enniscorthy to play the Wexford men at 2.30 in the semi final. This is the biggest game of the year for the club and all support would be greatly appreciated.

Well done also to James Griffin who came on for his first All-Ireland cap for Tullamore.