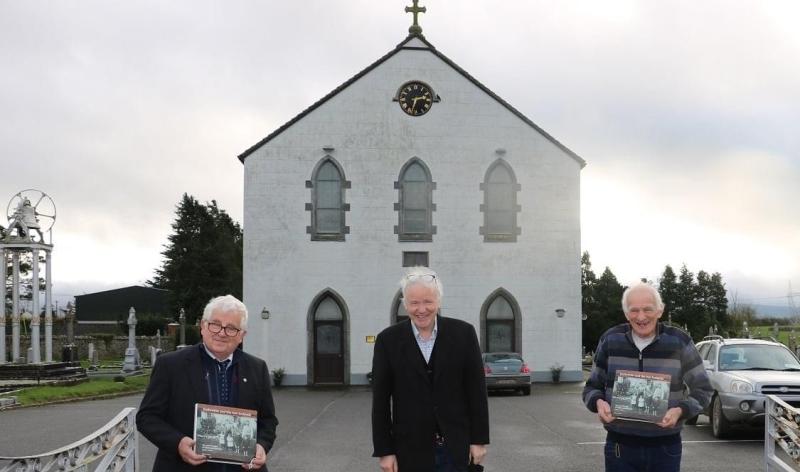 Johnny Butterfield, author Michael Byrne and Johnny Mann pictured with copies of the book at the church in Mopuntbolus

Rathrobin is a book that keeps on giving. Its 250 Biddulph photographs from the 1870s to 1920s, all carefully captioned, depict the two Irelands – unionist and nationalist, Catholic and Protestant, landed and cabbage garden.

What is interesting about the photographs taken by Colonel Biddulph (1849-1926, of Rathrobin near Mountbolus) are the nuances. He was of the lesser gentry, was a tenant of the Petty Lansdownes, and was keenly aware of the plantations of the 1550s to the 1650s.

He appreciated the needs of the farm labourers and was decent to his own tenants, indoor staff and farm workers. His entire estate was not much more than 1,000 acres. Biddulph’s circle was also the lesser gentry and those who served it such as land agents, bankers and clergy.

The Catholic-Protestant divide was strong but landed Catholic families did mix in Biddulph’s set, but not merchants or traders (even if very rich). Biddulph had an empathy with his farm workers and their families and sought their advancement. Many local families were photographed, together with the farming activities of his own employees.

Biddulph’s story, and that of his associates and friends, is illustrated by a selection of over 300 pictures in all, of which 250 are from the Biddulph Collection in Offaly Archives and fifty more to illustrate the introductory essay and provide the all-important context.

The essay and the photographs provide a more nuanced understanding of Ireland in the revolutionary period of 1900–1923. Biddulph’s wonderful house at Rathrobin that he had so carefully ‘restored’, and all his farm improvements, were lost in the Civil War in 1923.

Many other big houses from Ashford, to Ballyfin, Durrow, Brookfield, Castle Bellingham and Charleville are also recorded in this volume. Some such as Brockley Park in Laois are now gone thereby making this an important work of record.

The photographs by Middleton Biddulph were taken at a crucial time in Ireland’s history. Their publication now could not come at a better time. Rathrobin is the portrait of one small estate and Killoughy parish in Offaly from the 1650s to the 1920s, but the story is of national interest. T.E. Lawrence spoke of the Arab Revolt, perhaps in Ireland too we can talk of the Irish Revolt and not the full circle Revolution. You decide.

The photographs in the Magan Collection, now called the Biddulph Collection, were taken by Lt Col. Middleton Westenra Biddulph (1849–1926) who lived at Rathrobin, close to Black Lion Cross near Mountbolus, County Offaly. He had ancestors in the area from as early as 1694 and perhaps back to 1660.

Biddulph was proud of his family history and when he retired from the army in the mid-1890s he came back to live in Rathrobin and rebuilt the old house in almost ‘Camelot’ style with the benefit of a surprise inheritance. His brother Assheton, equally fortunate, lived at Moneyguyneen near Kinnitty and spent all his life and most of his waking hours hunting the fox.

A few of the Biddulph photographs date back to the 1870s, but most of the 1,200 pictures date from the 1900s to 1920. The exceptions are those taken at various army stations over the twenty-five-year career of Biddulph in the Fifth Fusiliers. As the cataloguing of the collection was in progress it soon became clear that the Biddulph photographs were not just another set of pictures of Edwardian and pre-war life in Ireland. Biddulph was not a descendant from planters of the Cromwellian or Williamite ‘Settlements’.

He was, in fact, a tenant himself to the heirs of Sir William Petty – the Lansdowne family. Lt Col. Biddulph held about 1,000 acres of which perhaps 700 acres he farmed with the balance leased to his long-standing tenants. Biddulph had an empathy with his farm workers and their families and sought their advancement. Many local families were photographed and all details of name and age carefully noted in the albums.

Biddulph had explored the history of the area and he knew of the great O Molloys and the losses they had suffered in two waves of confiscation. Biddulph was a decent landlord and employer and was well thought of by his neighbours. In the wider circle of his own friends, and in the context of the performance of his civic duties, he was well regarded. He did not succeed in being elected to the first county council in 1899 but was co-opted to a number of local boards and held a seat up to 1920–21. He was, of course, a member of the King’s County Grand Jury and served as High Sheriff in 1901 and was a deputy lieutenant of the county.

Biddulph had served in the British Army from an early age and did not give up being a unionist in pre-Independence Ireland. Like many of his own class he opposed the second Home Rule Bill in 1893. Yet it is clear enough from his support given locally, and his participation in local affairs (on a non-political basis), that he would have been an asset to the new Free State.

Some would say that the revolutionary period began with the death of Parnell in October 1891 and only closed with the end of the Civil War in 1923. Had Parnell survived as leader his conservative leanings might have saved the big houses and their owners. Curiously, Biddulph’s own marriage took place in the same month as the death of Parnell and would, in time, lead to the building of what was effectively a new house at Rathrobin.

It may well have been the only such grand mansion built in County Offaly in the 1891–1923 period by a major landowner. Biddulph’s optimism would not have been shared by the United Irish League, or later Sinn Féin, and probably not by the county’s big landowners either. All that he would try to do by way of improvements and ornamentation at Rathrobin would come crashing down in the month before the Civil War ended. The Land Commission divide would do the rest.

Biddulph’s was a life well lived for Queen and Country, but it was one that included an appreciation of the aspirations of his fellow Irish men and women in their native country and to a share in the fruits of their labour. In his conduct Biddulph never forgot that everyone was entitled to dignity and respect regardless of financial standing and political outlook.