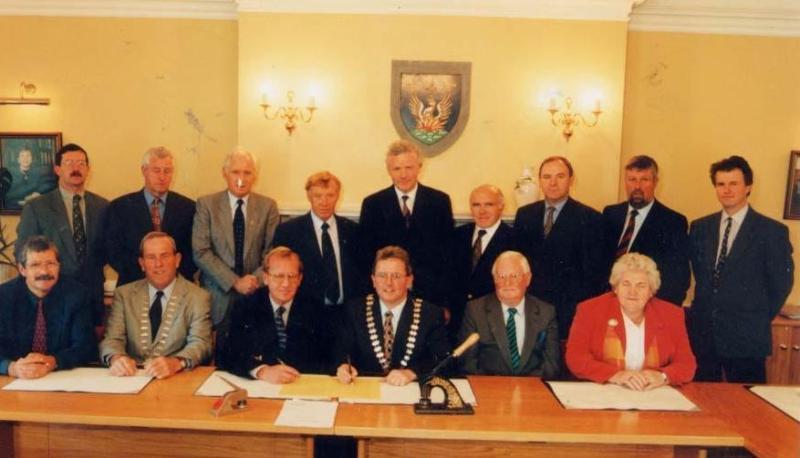 The late Anne O'Toole, front row far right, pictured at a council meeting in the mid 1990st a

THE death of former Independent councillor, Anne O'Toole has brought to a close a chapter in the political history of her adopted Tullamore.

A formidable presence on Tullamore Urban Council for 14 years, the Portarlington native was never afraid to express her views and represent her constituents.

She was also deeply involved in the community life of Tullamore and was a member of a large number of committees as well as working in the background to help those in need.

Born in 1942 in Portarlington, Anne was daughter of Tullamore native, Denis Walsh who was an outstanding hurler and footballer in his youth playing for the county on several occasions.

He was also a member of the Tullamore Old IRA battalion and was interned in the Curragh for a period.

Anne came to Tullamore in 1959 to work with Salts, then a major employer in the town. She was transported to and from Tullamore by a factory bus and became romantically involved with the driver, John O'Toole, from Offaly St. The couple married in 1963 when she was just 21 and lived in O'Molloy St and Clontarf Road before moving to Pearse Park.

The happy couple had five children but unfortunately John passed away at a young age leaving Anne a widow at just 47 years. This experience led her to form a branch of the Junior Widows Association in Tullamore, which was one of the most active in the country.

In Pearse Park she was a founder member of the Residents Association and was elected Mayor of the estate following a fund-raising drive.

She entered politics in the mid 1980s being elected to the Urban Council in 1985. During her 14 year term on the body she remained fiercely independent despite being asked to join several political parties.

But, according to her daughters Geraldine and Olivia, she did find the going tough on occasions as an Independent member as “she was very much on her own without the back-up of a party.”

Initially as a councillor she pressed for the abolition of service charges, or what she termed “double taxation.”

She also championed issues affecting the elderly and was a member of the Rights for the Elderly Group.

As an Independent councillor, Anne also prioritised the needs of other vulnerable groups in society such as the homeless and was a director of Tullamore Housing Association.

She was also deeply involved in youth activities and was treasurer of the Tullamore Summer Project.

Anne was a founder member of the Hospital Action Group formed to protect the status of Tullamore General Hospital when it was under threat from Government policy.

Deceased was also secretary of Tullamore Social Services Council, vice-chairperson of the Grand Canal bi-centenary committee, a life member of the Pioneer Total Abstinence Association, president of the Mothers' Club and a member of the Midland branch of the Irish Diabetic Association.

Anne was very much involved in the Sue Ryder Foundation and was manager of the body's shop in Tullamore.

A deeply religious woman she was a founder member of the local St Padre Pio Group 22 years ago and organised a special monthly Mass in the Church of the Assumption. She founded the group after being inspired on a trip to Knock she made in 1999, the year she lost her council seat in the local elections.

She was also a member of the town's St Patrick's Day Parade committee, along with her late brother-in-law Kevin O'Toole.

As well as her public profile, Anne worked quietly behind the scenes providing support to those in need and in distress.

Though a kind-hearted individual, she was strong willed and forthright in her opinions.

In poor health in recent times she had been a resident of Esker Rí Nursing Home in Clara for the past three years.

She passed away peacefully surrounded by her five children, Denis, John, Geraldine, John and Olivia.

Her Funeral Mass was celebrated by Rev. Fr Fergal Cummins and burial was immediately afterwards in Clonminch cemetery.