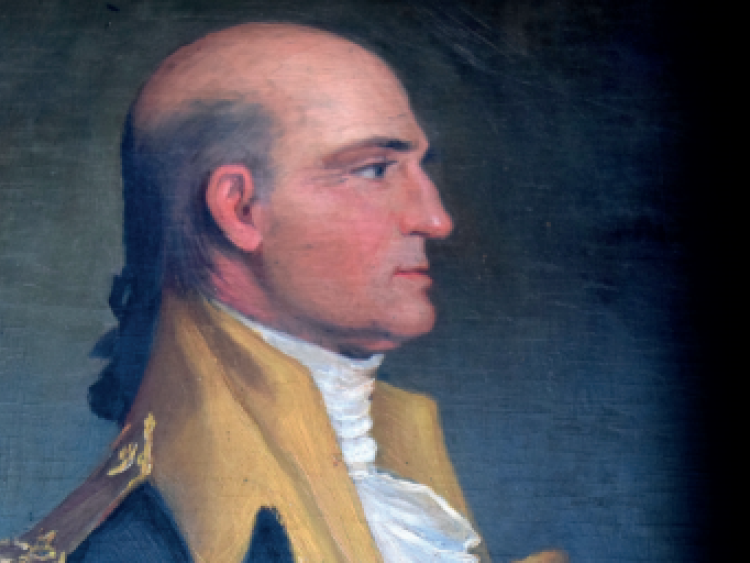 The extraordinary tale of Edward Hand is one of emigration, war, love, and a life on the frontline.

Born in Clyduff, King’s County, as Offaly was known at the time, on New Year’s Eve, 1744, Edward Hand was baptised in Shinrone, Co. Offaly, going on to Trinity College Dublin, where he studied medicine. Edward was born into a prosperous protestant family, and his parents were John and Dorothy Hand, members of the Anglo-Irish Gentry. They owned land and a manor house in the area. That home is still standing and is currently occupied by a couple who have had the property in their family for 150 years.

We tracked down some of Edward Hand’s descendants in America, and one of them, 72-year-old April Baily from Colorado recalled visiting Edward Hand’s ancestral home in Offaly in 2011.

“My husband Scott, my sister and brother-in-law, and I made our way to the home intending to request permission to take pictures of the outside of the home. The lady of the house, Rowena, met us outside, and once we had explained our purpose, invited us in, and graciously gave us a tour of the home, made tea, and spent some three hours of her time making us feel at home,” April said.

“We realised that Edward’s family must have been wealthy to have owned such a home and that his decision to join the British Army was likely not motivated by a need to escape poverty,” the proud member of the Hand Family Association added.

As the English law of primogeniture forbade the splitting up of estates where the entire estate would go only to the oldest son, younger sons of the gentry often went into law, medicine, the clergy, or acquired a commission in the Army.

Edward Hand did indeed enlist in the British Army in 1767, serving as a surgeon’s mate in the 18th Royal Irish Regiment. The
young Offaly man sailed to Philadelphia with that regiment in May 1767, and marched with them to Fort Pitt near the Ohio River. He returned to Philadelphia in 1774 and resigned his commission in the British Army, and soon joined the cause for American Independence. He moved to Lancaster County, Pennsylvania in that same year to practice medicine, and a year later he married Katherine ‘Kitty’ Ewing.

“Hand did not accept a commission with the Continental Army until the summer of 1775, a full year after leaving his British Army post, so, it is important to point out that he did not resign from the British Army to switch sides as such, but rather to go into private medical practice in Lancaster,” Samuel Slaymaker, Executive Director at Rock Ford Plantation, the historical home and centre dedicated to Edward Hand, explained.

He continued: “In this regard, it is imperative we bear in mind that some of the most prominent officers in the Continental Army also previously served as officers in the British Army, including Horatio Gates and George Washington himself.”

Lancaster was a region noted for considerable early Irish and Scots-Irish settlement, and as a group they were known for their anti-English and revolutionary beliefs. Hand was active in organising a band of colonial militia known as the Lancaster County Associators, and in 1775, when the American Revolutionary War began, he became a lieutenant colonel in the Pennsylvania Line of George Washington’s Continental Army.

Hand saw action in a number of flashpoints of the conflicts, including the Battle of Long Island and The Battle of White Plains, and was heavily involved in the wider American Revolutionary conflict for its duration. He was a member of fellow Irishman Colonel William Thompson’s regiment when they were sent to reinforce troops fighting in Canada. Hand was forced to assume command of that regiment following the capture of Colonel Thompson. He would later be promoted to Brigadier General, subsequently being upgraded in rank again to Adjutant General in the Continental Army in 1781.

Edward Hand became a key figure in the ongoing Revolutionary War, and took an active part in the major battles across America. Edward Hand and his regiment, the First Pennsylvania Regiment, took part in the famous Crossing of the Delaware
River, undertaken by George Washington on Christmas Night, 1776.

2019 marks the 243rd anniversary of this famous moment from the American Revolution where Washington launched a series of successful surprise attacks on the Hessian Garrison of a Colonel Rall. The battles of Princeton and Trenton followed in the days after the crossing where Washington’s troops continued to fight predominantly Hessian forces. Hessians were German soldiers fighting on the British side during the American Revolution.

The Hessians were defeated in that first surprise attack at Trenton, while the British were defeated days later at Princeton having been shrewdly lured south by Washington’s forces, of which Hand was an integral part.

Often when Hand was away on duty with the Continental Army, he wrote letters to his wife Katherine, the transcripts of
which have been provided by the Rock Ford Historical Plantation. In one of many letters sent in 1776, Hand wrote the following to his wife back in Lancaster: “My Dearest Kitty, The day before yesterday a body of the enemy landed on a peninsula on the East River. I suppose they think that movement will induce our army to move back, but I think they will find themselves much disappointed. Our late retreats were dictated by prudence, not by a dread of their arms. By the next good opportunity, you
shall hear from me more to the purpose. May every blessing and happiness attend you, our dear little one, and every one of
our friends and acquaintances. My dearest Kitty, your most affectionate, Edward Hand.”

After the gruelling battles of Princeton and Trenton, Hand’s stock was rising and he was working closely with George Washington and is said to have helped the future President plan the Siege of Yorktown, the operation that would force the surrender of the important British General, Charles Cornwallis, effectively paving the way for the negotiations bringing an end to the conflict. The Yorktown campaign proved to be the final land battle of the American Revolutionary War, and it led to the Treaty of Paris, the signing of which in 1783 formally ended the war.

Edward Hand was promoted to Brevet Major General before retiring later that year at the conclusion of the war. The decorated revolutionary returned to Lancaster and resumed his practice of medicine. He owned and operated Rock Ford plantation, a 177-acre farm on the banks of the Conestoga River, one mile south of Lancaster. The Georgian brick mansion remains today, and is operated as an historic site open to the public where Edward Hand’s life is celebrated.

Edward Hand remained active in civil affairs, holding numerous official posts, including Chief Burgess of Lancaster, Presidential elector, Delegate to the convention for the 1790 Pennsylvania Constitution, Member of the Congress of the Confederation (1784–1785), and Member of the Pennsylvania Assembly (1785–1786).

As a Presidential Elector, Hand would have played a part in the election of George Washington as the first President of the United States. George Washington, just 16 days after becoming America’s first President, made a visit to Edward Hand on July 4 in 1791. One of the numerous newspapers printed in Lancaster at the time recorded the historic visit, which took
place on the occasion of the 15th anniversary of the Declaration of Independence.

“His excellency, the President of the United States, arrived here from Yorktown, amidst the ringing of bells and the cheering of a great many people. Flags were displayed on the courthouse. Before dawn of the next day, Monday, the inhabitants were
reminded that it was Independence Day by the firing of cannon, the ringing of bells and the beating of drums," the paper read.

"General Edward Hand, who had himself achieved distinction and won fame as an officer in the Revolution, was then the most conspicuous citizen of Lancaster County. At a request of the inhabitants, he, with the other officials of the town, waited upon
the President and delivered an address. Washington feelingly responded," the report continued.

“I also understand that this friendship went back several years, dating from the time Edward was at Fort Pitt in 1770. The fact President Washington visited the Hand family makes it clear that the men were not just war comrades, but genuine friends,” she added.

These thoughts are echoed through the words of a letter written by President Washington to Edward Hand in 1784, not long after the conclusion of the American Revolution and the vindication of American freedom. Washington wrote: “I have it now in my power to make known my sentiments and feelings respecting my military friends. I cannot decline making use of the first occasion, after my retirement, of informing you, my dear Sir, how much reason I have hadto be satisfied with the great zeal, attention, and ability manifested by you in conducting the business of your department; and how happy I should be in opportunities of demonstrating my sincere regard and esteem for you.”

Edward Hand lived out his later life with his family at his home in Lancaster. As well as his roles in official life, Hand played a key part in establishing Lancaster’s first almshouse, which later developed into the Lancaster General Hospital. He experimented in horticulture on the grounds at Rock Ford, and actually developed his own variety of plum, called the Hand Plum. He also admirably continued to practice medicine, offering his services without charge to those who could not
afford to pay.

He passed away from cholera in 1802 at the age of 57 and has been written into the annals of American history, remembered as a true and honourable proponent of American independence.

Samuel Slaymaker from the Rock Ford Historical Plantation describes Hand as “one of Pennsylvania’s leading figures in both the American War of Independence and during the early years of the American Republic,” while April Baily concluded by saying her ancestor “was an example of the best of the times; strong in war, civic-minded in peace; a loving husband, father and patriot.”