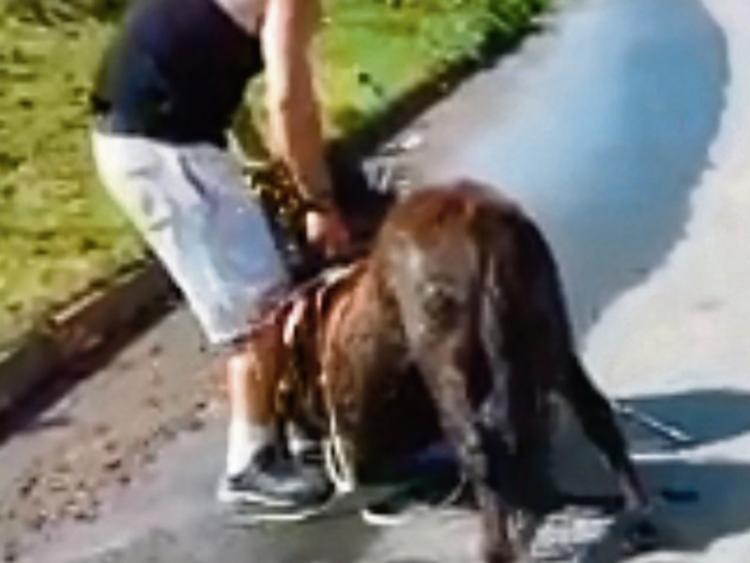 Gardai in Clonmel are investigating another act of cruelty to horses in the town.

A mother, who had her eleven month old baby in the back of her car, was abused and had stones pelted at her as she filmed a tiny horse in an extremely distressed condition being removed from a sulky at Heywood Road Clonmel in sweltering heat conditions around 4pm on Wednesday.

The video, which has been viewed up to 50,000 times, has also been shared thousands of times on social media with widespread condemnation of the treatment of the animal.

Gardai have appealed for witnesses in relation to the incident.

The graphic video shows two young men releasing a young horse from a sulky. The animal is later shown collapsing to the ground and dragged to the side of the road. Gardai have appealed for anyone who may have witnessed an incident involving an animal that occurred on the Heywood Road in Clonmel yesterday at about 4pm. Any person who witnessed anything in relation to the incident is asked to contact Clonmel Garda Station at 052 6177640 or the Garda Confidential Line 1800 666 111.

There has been calls for a full time horse warden to be appointed in Tipperary  following last  year's discovery of a number of emaciated and dead horses in the Knocklofty area of Clonmel which was described as one of the worst instances of animal welfare neglect ever encountered.

Up to eight horses were found dead in Knocklofty in Clonmel in December 2017 with a further 17 horses discovered at the Clonmel site removed by the Irish Society for the Prevention of Cruelty to Animals (ISPCA) compound in Cork for re-homing.