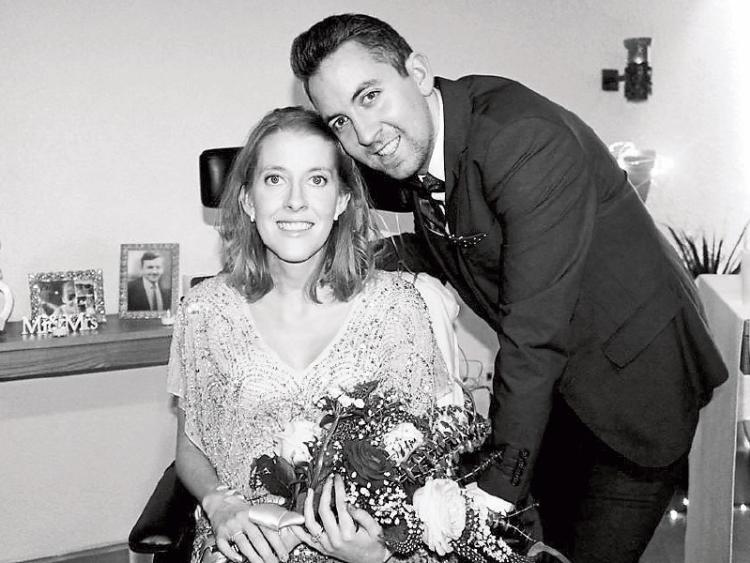 Kathy Casey and Noel Byrne on their wedding day, two days before her passing

A heartbroken man has written a letter to his wife, who sadly lost her battle with cancer just two days after their wedding in January.

Kathy Casey, 29, a young teacher at Scoil an Linbh Íosa, Prosperous, was laid to rest on January 19.

She was diagnosed with cancer three weeks before her passing. The teacher and her partner Noel Byrne decided to bring forward their wedding date by seven months, so they could be married before she died.

“We always said we were a team, but now I’ve lost my captain,” he wrote, in the letter posted to Facebook, which has received almost 10,000 likes and 2,000 comments.

Some online commenters have posted their tributes to the couple, with one saying: “Some people live to a ripe old age yet never get to experience loving or being loved totally by their soulmate. May your memories keep you strong, until you reunite.”

Another wrote: “Always remember you were her hero too, and the times ye had in those fun packed 11 years some people don't do in a lifetime.”

Noel wrote the letter to Kathy in the days that followed her death, and read it at her funeral.

“I’m writing this in your bedroom in Ardagh, surrounded by everything that encapsulates your life over the past 29 years. A room the essence of you. We’ve been through so much since we first met in Mary I on the very first day of college in 2006.”

“I don’t think it’s sunk in yet that you’re gone. I so badly want this to be a dream, but, in reality, it’s a real-life nightmare. People say there are no words. The truth of it is there are - unfair, undeserved, one hundred percent unnecessary.

“I’m not writing this letter for you to bemoan the cruelties of this world though, I’m writing to tell the world just how great you are. You hold my hopes, my dreams, my love. You’re one of a kind and I’m lucky to call you my wife.”

The heartbroken husband opened up about his and Kathy’s plans for the future; marriage, a home, children, and a life spent together.

“The plans we had for the future: a house in Naas, three kids - Keegan, Kelly and Casey - the names we knew people would question. They’d support Limerick in the hurling, Mayo in the football. Before any of that though, our planned wedding on August 3rd, for 2018 was meant to be the year we got married,” he wrote.

“Last Sunday, on the eve of our 11th anniversary and seven months ahead of time, we fulfilled our wish.”

“The smile on your face as you walked into the Oratory in the Mater Private in your Jenny Packham dress with your mink nail polish - your radiance, your beauty - it’s everything I’d hoped for and more. The love was never stronger, the joy palpable. It’s a moment that will never be forgotten. You held out long enough to get that walk down the aisle, the moment of “I do”, the matrimonial kiss.”

He wrote of “a proud Limerick woman”, with whom he travelled extensively, including to China, North Korea and India. But they had plans to travel and see more, their scratch map “now left unscratched”.

“Your passion for teaching and the energy you brought to Prosperous was inspirational. I’ve been told you were the heart of the school.”

Kathy left behind “a heartbroken family, devastated friends and soul-crushed colleagues”, he said.

“While you’ve taken this final journey on your own, departing ahead of time, I know you’ll be waiting for me in Arrivals when my time too finally comes. While you wait, I know you’ll meet all those that have gone before. You’ll also finally get to meet my dad, and fill him in on the last 11 years. Tell him I said hi.

“You told me that when you were gone, I’d need to take on your strength, and it’s something that I hope I can do, if even a fraction. Your approach to tackling the past three weeks is testament to your character - your strength, bravery, determination, and positivity. You’re an inspiration, KC,” wrote Noel.

He finished the letter with: “You’re my travel companion, my jiving partner, my secret keeper, my best friend, my wife. I love you, pretty lady, always have, always will.”

Ms Casey's funeral took place at St. Molua’s Church, Ardagh, and she was buried in the adjoining cemetery.