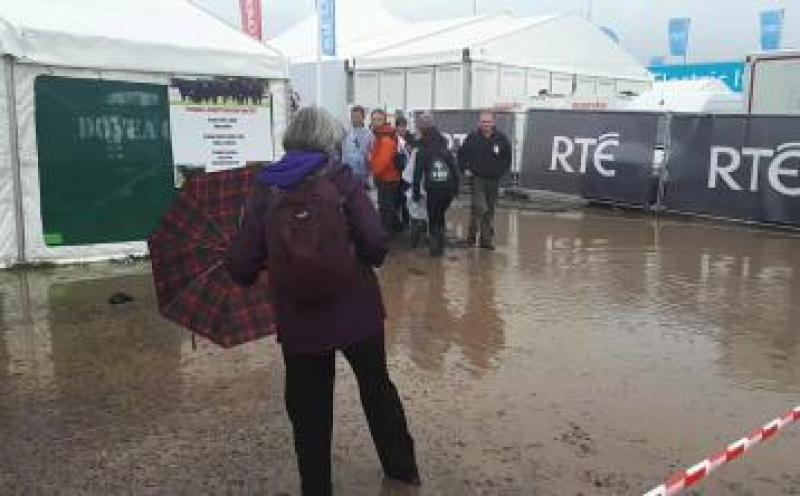 Flooding at the RTÉ tent at #ploughing17

There is 'absolutely no question' of the National Ploughing Championships being cancelled according to the main National Plouhing Association.

Anna Marie McHugh, Assistant Managing Director of the National Ploughing Championships, said that while part of the site had been flooded the third day of the event would proceed on Thursday.

"We have it totally under control and there is absolutely no question of the third day being called off," said Ms McHugh.

Some pathways in the centre of the site had to be closed and there was flooding around the RTÉ tent and other areas. However, the majority of the site was not affected. Ms McHugh confirmed that some parts of the site had been affected by the torrential rain that fell for most of the second day of the championships being held at the site in Screggan near Tullamore in Co Offaly.

However, she said the weather was expected and had been planned for. She said the site would be assessed this evening and remedial work would be carried out on the walkways and flooded areas.

Ms Hugh, who is daughter of MD Anna May McHugh, said tankers have been lined up to remove any water that has accumulated in a sections of the site. She admitted, however, that they were lucky that the rain had stopped during the afternoon.

The Laois native said a steady flow of people leaving the site on Wednesday has allowed for traffic stewards to manage traffic flow out of the site. Ms McHugh said there was backup parking lined up for Thursday if some of the car parks were deemed to be unfit for parking.

There is also some relief that Met Éireann's weather forecast for the final day on Thursday. Only showers are in the forecast.