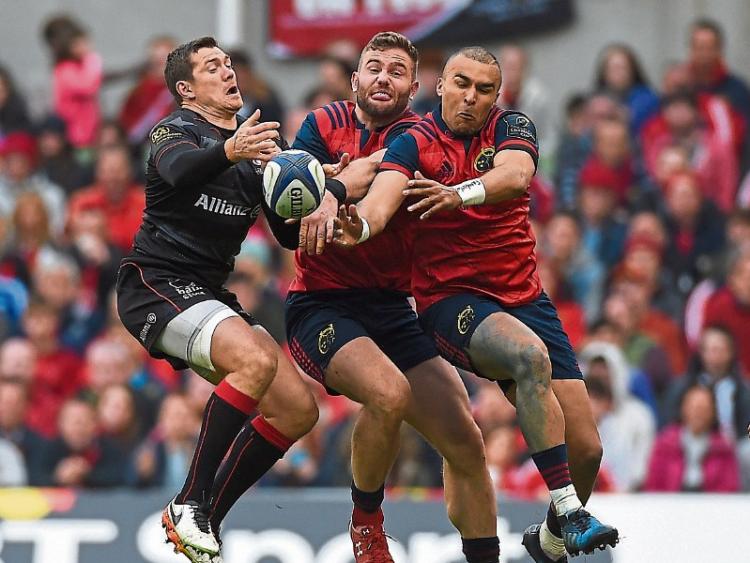 Munster's Jaco Taute and Simon Zebo in action against Alex Goode, of Saracens, in the Champions Cup semi-final

MUNSTER hooker Niall Scannell admitted it would have been a 'huge blow' to the province had Director of Rugby, Rassie Erasmus opted to leave this summer.

Erasmus ended any speculation on his future at Munster by confirming that he would be remaining on in his position for the remaining two season's following Saturday's devastating Champions Cup semi-final defeat to Saracens at the Aviva Stadium.

Ruthless Saracens consigned Munster to a fifth successive European Cup semi-final defeat when running out impressive winners on a 26-10 scoreline.

News that Erasmus is set to remain on at Munster was the one bright note on an otherwise disappointing day for Munster fans, many of whom got caught up in frustrating, lengthy traffic tailbacks on the way to the game.

Speculation had been growing in recent week that the former Springbok would return home this summer to take up a position with the South African Rugby Union.

Following Saturday's game Niall Scannell said: “Rassie told us he was staying on so the speculation (about his future) wasn't really in our camp.

“But I can't speak highly enough of himself and Jacques (Nienaber) and then you're looking at Jerry Flannery and Felix Jones, they just epitomise what Munster is about.

“They're two fellas who on the field were warriors and they drive the standards now, and Jacques is the same, and I just can't speak highly enough of what they've done in such a short space of time.

“That's where we've come to now. Obviously Axel (Anthony Foley) had a huge hand in it as well, in terms of the squad he got together and the belief he showed but they've done such a great job.

“It's not a surprise to us but it would have been such a huge blow if he did leave, because he's such a good coach.”

Munster now switch their attention back to the Guinness Pro12 and Saturday's away fixture with Treviso in Italy, 6.05pm Irish time.

A win would guarantee a home semi-final for Munster with now just two series of regular season fixtures to go. Munster have confirmed that Jean Deysel suffered fractured ribs in the defeat to Sarries, while Peter O'Mahony sustained concussion.