OPINION (AN COLUN): A pleasant Sunday evening in a Banagher Fort 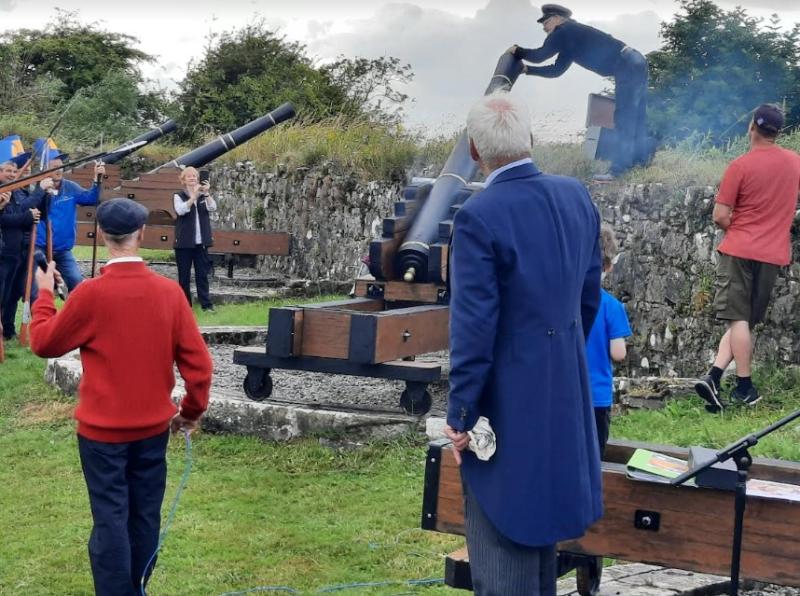 Kieran Keenaghan (in the red jumper) and James Scully (in the blue tails) look on as Seán Woods primes a cannon for firing.

BANAGHER is a place which is incredibly rich in history. This is one of the things I love about the town. Another thing I love is the tourist buzz of people arriving and leaving in their boats; of people speaking German, French, etc as they make their way up the main street of the town, frequently heading towards Hough's, the famous pub which is rightly famed because it has so much colour and energy.
The history is fascinating. Layer upon layer of it, going back over the centuries. We can physically touch this history in places like St Rynagh's Graveyard (where there are tombstones, with beautiful lettering, dating back to the 1500s) or in Fort Eliza, the Napoleonic era fort located about half a kilometre outside the town on Crank Road.
I ventured over to Fort Eliza on Sunday evening for a very enjoyable event which included a gathering of about fifty people.
The purpose of this event was to highlight the considerable amount of work which has been done on the Fort over the last couple of years. Archaeologists visited last year and did a little bit of investigation. Some repair work was carried out on the Magazine building in the centre of the area and on the walls. Four replica cannons were built (of concrete and wood) by Banagher Precast Concrete Ltd. A lot of cleaning up was done. The place looks great now. Prior to it all, if you visited Fort Eliza, you would have been unsure of what it was. Now, there is little doubt: This was a defensive structure, designed to protect its builders from a perceived threat. The threat in this instance was the French.
James Scully welcomed me to the event. James is one of those fantastic people who deeply love their communities and want to see them improve and succeed. Over the years he has invested an incredible amount of energy in Banagher, enriching the life of the place.
Nine festivals ago he kickstarted the town's annual festival “That Beats Banagher”. He has been very ably assisted in this endeavour throughout the years by his good friend Kieran Keenaghan. Kieran, like James, has a very deep love for Banagher and its people.
As I arrived at the Fort on Sunday evening James gave me a present of three books. He said they were a gift in thanks for the work of The Midland Tribune and the important role which it plays in local community life. I was touched and grateful. Unlike some people James understands the importance of a local newspaper in a region's life.
Two of the books were published in 2021. They focus on Charlotte Bronte and her husband Arthur Bell Nicholls. The couple honeymooned in Banagher in July 1854. The famous novelist enjoyed her stay in the town and she also wrote of her happiness. She was happy because of her husband. She wrote that she was thankful to God for the affection and devotion “of a truthful, honourable, unboastful man.” The two novels which focussed on Charlotte and Arthur were written by Michael O'Dowd and Pauline Clooney. Michael and Pauline took part in this year's That Beats Banagher festival. They told us that they also took part in a literary festival in Bradford last year, during which there was a debate about Arthur Bell Nicholls' character. The motion was that Nicholls was a 'driveller' (previously it had been that he was a 'monster' but this had been changed). During the debate Pauline and Michael vehemently defended Nicholls' character. As evidence they pointed to Charlotte's own statements about the matter. Time and again she praised her husband's personality.
The third book handed to me by James was the 2012 novel “That Beats Banagher!” by Patrick Flattery. In his Preface, Patrick tells us where the phrase That Beats Banagher comes from. “It's a well known Irish phrase, he says, “which dates from the 19th Century when the town was the very worst example of a rotten borough, a corrupt electoral area controlled by the local landed gentry. In short, if something 'beats' Banagher, it's either fairly wicked or rather extraordinary.”
James was MC for Sunday evening's event. He told us Fort Eliza was also known affectionately in Banagher as the Sal Battery. It was built in 1803. “The Ferbane historian Brendan Ryan discovered from the Leinster Gazette much of interest about the fortifications along the Shannon during the Napoleonic era. In Athlone Fort George was built, named after the King of the time, King George III. Fort Eliza was named after Elizabeth, the third daughter of George III. Elizabeth had poor health when she was young and nearly died at the age of 15. She liked a harmonious life and rarely disagreed with her parents. She was an artist. She married at the age of 39 and it was the happiest marriage of all her siblings.”
James pointed out that at the beginning of the 19th Century the British were very worried that the French were going to invade Ireland. The belief was that the French would sail from Brittany, land in Galway Bay and then march to Dublin. On the way to Dublin the only natural barrier was the Shannon. Therefore, that was the obvious place for the British to place their fortifications.