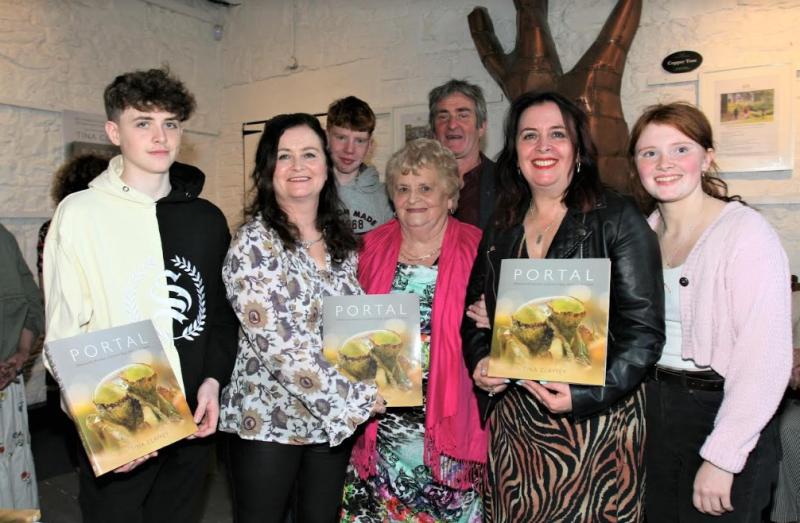 Tina Claffey, second from left, pictured with members of her family at the launch of Portal. (Pic: Rose Mannion).

ACCLAIMED Birr photographer Tina Claffey launched a stunning new book of her nature photographs on Thursday, June 9th.
A big crowd turned out for the launch in the Copper Tree Gallery in Birr Castle and they all marvelled at the beauty of Tina's photos in this, her second book.
Tina's good friend and mentor John Feehan officially launched the publication and, as a present, gave her his long-treasured copy of Thoreau's “Walden.”
In a great speech John talked about the micro world of the bog landscape (especially Killaun Bog near Birr) which the Birr woman's photography has revealed. It's a world which few of us are acquainted with, he said, because it's so small; and yet in Tina's hands it's revealed in macro and very beautiful detail. He said Tina had gone down the rabbit-hole, like Alice, and discovered a wonderland.
She's being acclaimed because of her great skill and because she's revealed this magical world of the minuscule to our eyes.
The book is called “Portal” and it shines a light on the “otherworldly wonders of Ireland's bogs, wetlands and eskers.”
“The bogs and wetlands are my sanctuary,” said Tina. “I have been exploring and spending time within them now for many years, and they really soothe the mind, body and soul.”
She recalled when she first began to explore them. She had been inspired by a walk in Killaun Bog with John Feehan in 2012. “John had encouraged us to look closely at the flora and fauna with the small hand lens he had given to each of us. The wonder of seeing the intricate beauty of the living carpet of the bog in such close detail unlocked a door to another realm. It was a walk that changed the course of my life.”
She invested in a macro lens, which allows her to see and capture the flora and fauna up close. “Much of what I photograph can easily be passed by, and is sometimes too small to be casually observed and appreciated with the naked eye.”
Her work is inspired by Ralph Waldo Emerson's quote, “Adopt the pace of nature, her secret is patience.” Tina likes to explore alone, in silence. All of her senses are alert as she wanders. “Each bog I visit,” she says, “has an energy or presence. An ancient soul. It breathes. Seasons come and go, flora and fauna emerge, flourish and die, and in each stage there is beauty.”
“Portal” is published by Currach Books and can be bought on their website. Copies can also be found in the Birr Castle shop.