Moffett leads from start to finish at Birr Rally 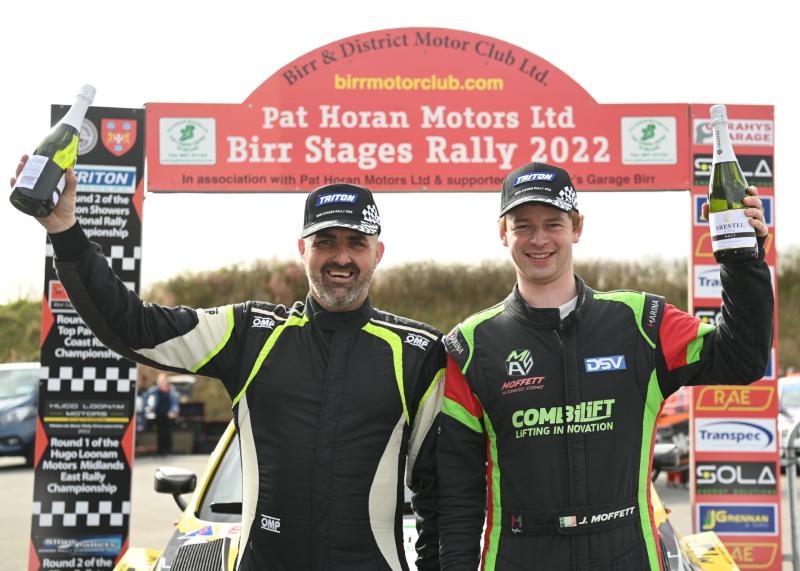 They finished the six-stage event 33.7 seconds ahead of the Fiesta WRC of Donegal’s Declan Boyle and his Monaghan co-driver James O’Reilly with Armagh’s Darren Gass and Kerry’s Noel O’Sullivan (Citroen C3), 19 seconds further behind in third.

Moffett was quickest on the opening stage near Kilcormac where he led the Citroen C3 of Darren Gass by 13.1 seconds with Cork’s Keith Cronin (VW Polo GTi R5) just three tenths of a second further behind in third. Indeed, Cronin, the four time British Rally champion, on his debut in a VW Polo GTi R5, was quickest through the stage south of Kinnitty and arrived at the service park in second spot - 11.5 seconds behind rally leader Moffett. It wasn’t all plain sailing for Moffett, who had intercom woes that prevented him being totally committed on what was a very fast and demanding stage.

Cronin reckoned he was a little too cautious on the second stage and at service changed to a harder compound tyre. Fermanagh’s Garry Jennings in his right hand drive Fiesta R5 was 10.9 seconds further behind in third on what was his first dry rally in the car.

Former three time national champion Declan Boyle reckoned his Fiesta WRC was very nervous and he wasn’t prepared to commit to the fast sections of the stages.

Gass, after his promising opening stage, dropped to fifth when he spun his Citroen C3 at the final junction of the stage. Sixth placed Desi Henry (Fiesta R5) lost time with an issue with the pop-off valve. The top two wheel drive exponent Donegal’s Kevin Eves (Toyota Corolla) had to traverse most of the second stage without a clutch, he also caught up with Seamus Leonard’s punctured Fiesta R5. Stephen Wright (Fiesta R5), Stuart Darcy (Proton) and Michael Carbin (Mitsubishi) completed the top ten. Wright admitted he was somewhat too conservative on tyre choice, Darcy’s Proton lacked power on the first stage and Carbin had an eventful second stage due to the errant handling of his Mitsubishi.

On the repeat of both stages, Moffett and Cronin were equal fastest on S.S. 3 and Moffett was 0.9 of a second better on S.S. 4 as he increased his lead margin to 12.4 seconds.

At the final service, Moffett, with the intercom issue sorted, declared that he was going as hard as what was required. Cronin was happier with the performance of his tyres but added that he was still trying to sort pressures, it took time on the fourth stage for the tyres to work properly. Jennings, 21.3 seconds further adrift in third had no problems as he continued to get valuable seat time in the car. Having stiffened the set-up of his Fiesta WRC, Boyle, in fourth, benefitted accordingly. Gass and Henry rounded out the top six, the latter’s Fiesta R5 had a misfire through both stages. Wright, in seventh was more content with his performance on the repeat of both stages.

Not even the re-occurrence of clutch trouble could deny Eves from leading the two-wheel drive category and eighth overall, his closest rival Jason Black (Toyota Starlet) was 39.5 seconds adrift, he had to change the alternator at the final service. Michael Carbin (Mitsubishi) was sandwiched between the duo as he improved his performance by changing to a harder compound tyre. Gary Kiernan (Escort), Darcy (Proton) and the Fiesta R5’s of Niall Maguire and Paul Barrett were on the fringes of the top ten.

Jennings withdrew at the final service halt for medical reasons and Cronin retired his VW Polo GTi with a broken propshaft on the penultimate stage. Meanwhile, Moffett went on to claim his second win of the season with Boyle taking second place followed by Gass, who actually netted the bonus point for the best time on the final stage. Henry (Fiesta R5) came home fourth blighted by the misfire with an untroubled Wright securing fifth.

Sixth placed Eves claimed the top two-wheel drive award ahead of Cavan’s Gary Kiernan (Escort), who broke the propshaft on the first pair of stages, Black was third in the category.

The top ten was completed by Carbin, the aforementioned duo of Kiernan and Black along with Monaghan’s Niall Maguire (Fiesta R5).