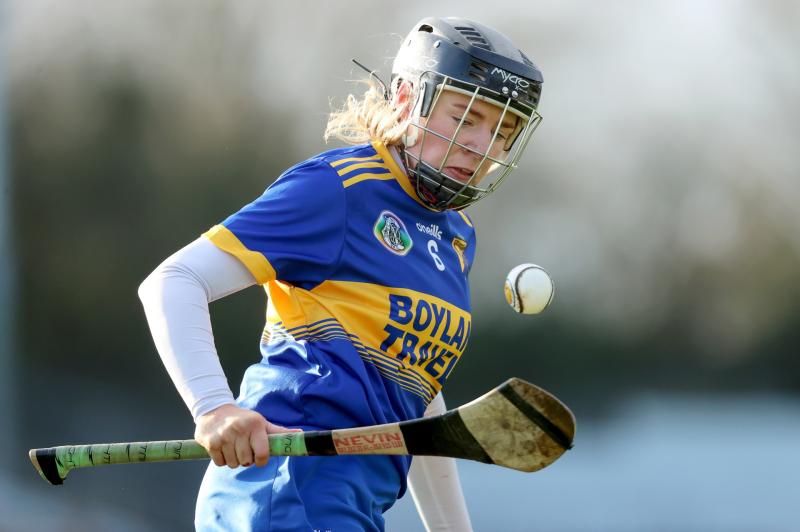 THE honour of being the first Offaly player to lift an All-Ireland camogie club trophy fell to St Rynagh's captain Grainne Dolan, who led her side to a historic four point victory over Waterford's Gailltir in Saturday's final at Semple Stadium.
The captain led her side by example with a towering display in a terrific team performance and naturally she was delighted with the victory when speaking after the game.
"It's amazing, you couldn't describe how good it feels. The girls are amazing and I'm so proud of each and every one of them. I feel it's been a long time coming and I'm just so thrilled that we got the win here today," the captain said.
It was a tough battle all through but Grainne said that was what they expected. "We knew it was going to be so tough. Gailltir are brilliant, they have been in three All-Ireland finals in a row, they have an All-Ireland title already and that's not from fluke, that's from working hard so we knew what it was going to take to beat them here today and that's what we did. We tried our best to outwork them as best we could and spoil any possession that we could off them and we succeeded in that."
St Rynagh's got a slow start and Gailltir hit two points in the first 41 seconds but Rynagh's settled better after that. "We didn't panic," said Grainne. "We have been in positions like that where teams have got a good start on us so we know what to do, to reshape and get back into our positions again, not panic and just play our game as best we can and that's what we did. We didn't let those early scores deter us at all, we just worked really, really hard."
Going in level at half time having faced the wind, Grainne knew they still had work to do in the second half. "I think we felt good in the sense that we were playing against that breeze and we weren't going in in a losing position but we knew that we could keep up to them, we could outwork them if we really tried, so I think that was really good going it at half time. We knew what the second half was going to be like, we knew it was going to be a tough battle but we just tried our best and that's all we could do."
Getting an early goal in the second half was a help and gave them a small cushion to defend. "I know it wasn't the most extravagant of goals, but it's a goal nonetheless and I think from there we tried so much to protect that lead because we knew they were going to go for goals and even just trying to keep them out, not let them get through us, it was tough and they really tested us but we kept ourselves really strong and we got the win in the end."
Having lost to a late Gailltir goal in the final two years ago, did that cross her mind in the closing stages when they defended a two point lead.
"I don't know about the other girls but it came into my mind," she laughed. "I think that last free, I stupidly threw up the ball in my hand, it was end of the match panic, but Sinead Moran put her body on the line and came out with it and I knew from there, they are not going to get in, they are not getting that goal and then the ref blew the whistle.
"We knew it could possibly come down to the wire as in the last match as we are so close. I suppose our teams are tit for tat and we knew it could come down to that again so we were prepared for that. One thing we said all week was brave, to be really brave and I think we were in the end, just putting our bodies on the line for each other and making sure we kept them out."
She admitted it was a relief when the gap finally went out to four points but knew they still couldn't relax. "It was, but we knew that four points could easily be taken back down to two very quickly and as you could see, they had some great strikers and great scorers out there, so it was nice to be up that extra point but we knew they were going to go hammer and tongs for a goal and we just had to keep them out."
Grainne said this win definitely makes up for the disappointment of two years ago. "Gailltir are in that position now, they know what it feels like and they felt like that before but no doubt they will be back again and hopefully we'll be back again to defend our title," she said, noting that could be in just a few weeks time when the delayed 2021 championship begins.