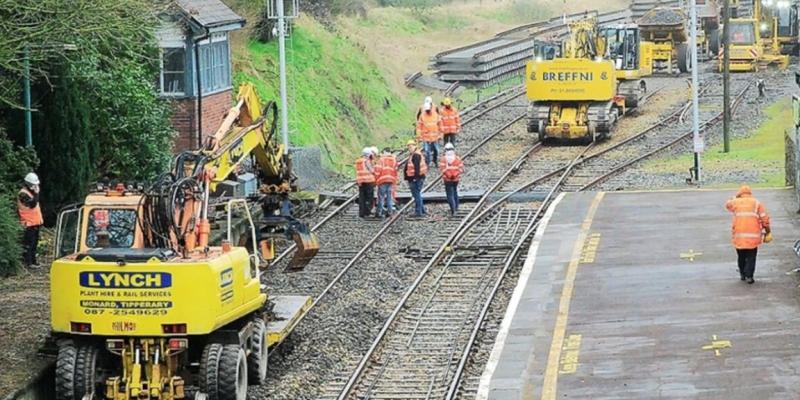 Workers laying new continuous welded track on the Limerick / Ballybrophy Rail Line. The whole 91kms of the route is being upgraded and the works are nearly finished.

AFTER many years of worry that the government would scrap it, the future is now looking bright for Offaly commuters travelling on the Limerick/Ballybrophy rail line.

The line is 91kms in length and runs from the city of Limerick to Ballybrophy in Laois, passing through Nenagh, Cloughjordan and Roscrea.

Virginia O'Dowd of the North Tipperary Community Rail Partnership told the Midland Tribune this week that her group has been campaigning for many years to save the line.

"For many years we thought the service was being deliberately neglected and wound down, and was heading towards closure. Now however, the future looks bright. Over the last few years a new continuous welded track has been laid along the whole line and there's only a few miles of this new track to install. There are 3.5 miles being upgraded at present leaving nine miles approximately (mainly between Cloughjordan and Roscrea) in need of upgrading. The slow speed of the trains is still an issue but when the last bit of new track is laid down then the speed of the trains will be able to increase."

Virginia said her group enjoys a good relationship with Irish Rail and has met with Minister Eamon Ryan.

"We are appealing to the Minister," she remarked, "to get the rest of the track installed as quickly as possible. We also need a new timetable because the current one is not fit for purpose."

The councillors of Nenagh Municipal District discussed the line during their recent meeting. They pointed out that while it's been good to see progress, significant problems remain, including an inadequate timetable and a lack of a shuttle bus connection between the train station in Limerick and the third level institutions and houses in the city.

Cllr Ger Darcy pointed out that because of a scarcity of accommodation in Limerick many university students are now taking the 7.30am bus from Nenagh.

“The demand for bus tickets has risen considerably. Now you have to pay for a return ticket in advance. I was told that on a couple of occasions people were left behind because there wasn't enough room on the bus for them. I think we should write to Bus Eireann about this and ask them to provide more buses."

“Accommodation is a big issue in cities now,” commented Cllr Michael O'Meara, “and people have to commute long distances from North Tipperary whether they like it or not.” He spoke about the European Regional Development Fund. “The EU is now saying that rail travel should be given a lot more emphasis. The reality is that North Tipperary is now the home for a lot of people who are commuting to Limerick and they need a better rail service, a better Limerick/Ballybrophy line. I am part of the Regional Assembly and this is a big topic in the Assembly. There is a strong emphasis on improving the rail service all over Munster.”

Cllr Darcy said he lives near the Limerick/Ballybrophy line. “It was good to see them laying the new track near my area over the last several months. But a lot of people are complaining to me about the lack of a shuttle bus between Limerick station and UL, LIT and Mary Immaculate College.”

Cllr Fiona Bonfield said it was disappointing that the Limerick/Ballybrophy line was not mentioned in the National Development Plan.

Marcus O'Connor said the X12 bus from Nenagh to Dublin Airport was a very popular service, which stopped during Covid and hasn't restarted yet. The service to Shannon has stopped as well. He agreed that the train timetable is poor.
Cllr O'Meara said the general mood of our era is for a greater emphasis on public transport which should be good news for the Limerick/Ballybrophy line.

“We should meet with our Limerick counterparts to talk about the need for a connecting bus service from the train station to the third level educational institutions in the city."

Virginia O'Dowd said a midday service needs to be added to the timetable as well as an earlier train so people can arrive in Dublin at an earlier time and return on a midday (rather than an evening) train, if they wish.

She said Minister Ryan is thinking of opening a new rail stop at Annacotty in Limerick to serve University of Limerick and the large number of houses in the vicinity.

"We are in discussions at the moment with the Minister and Irish Rail about a new stop/park and ride in Annacotty serving the University, and industrial park.
"Overall, however, the timetable and the connecting service are not people friendly, either for working people or for students." She said Local Link is being considered as a shuttle service for those arriving in Nenagh and Roscrea Stations. She added that a significant sum of funding for rail travel has been included in the National Development Plan.

She pointed out that it looks likely that all of the new track will have been installed at some stage during next year "and then, we think, there should be a big relaunch of the whole line. After many years of campaigning it would be a big moment."