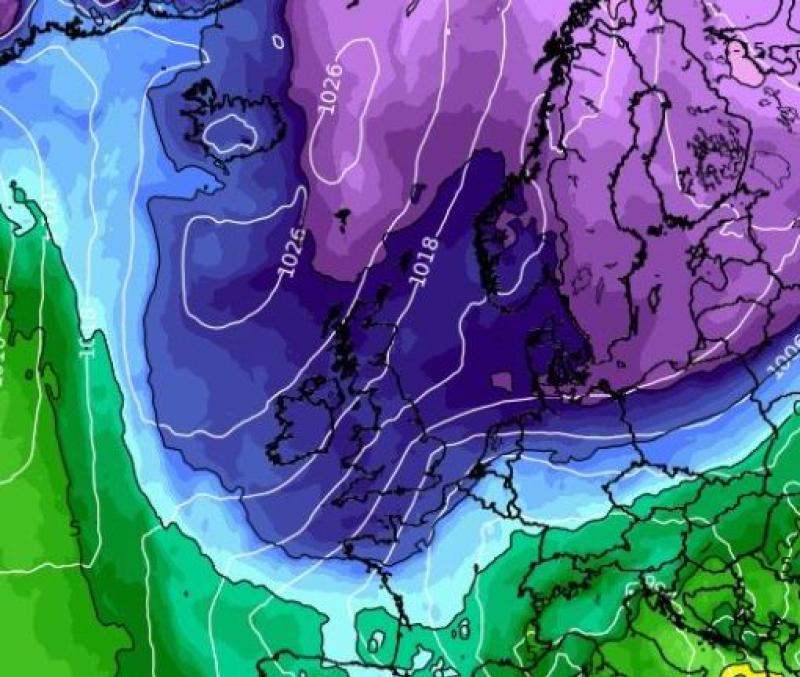 A dramatic change is coming in the weather with Met Eireann forecasting colder temperatures and wintry showers in the coming days.

According to Met Eireann, the weather in Ireland will get noticeably colder in the coming days with temperatures getting back into single digits with showers at times also, some wintry. However it is not all bad news as there will still with a good deal of dry weather with milder weather on the way again next week.

According to the latest Met Eireann weather forecast for Ireland, mist and fog will clear will clear on Wednesday morning and there will be some sunshine. However it will become mostly cloudy with patchy rain or drizzle moving southwards. Colder, brighter weather following from the north later, with afternoon temperatures over most of the country of just 5 to 8 degrees, milder in Munster and west Connacht with highs of 8 to 11 degrees.

According to Met Eireann, it will be largely clear overnight on Wednesday and it will be dry for most as showers become mostly confined to eastern parts, possibly turning wintry at times on high ground. Much colder than recent nights with lowest temperatures of -3 to +1 degrees with frost developing in mostly moderate northeasterly winds, fresher in the southeast.

The latest Met Eireann weather forecast for Ireland for Thursday says that frost will clear in the morning to leave a day with good sunshine interspaced with well scattered light showers. Noticeably cooler throughout the country with highest temperatures of 5 to 9 degrees in mostly moderate northerly winds.

It will be largely dry and clear on Thursday night though there will be some showers near coasts. Another cold night with lowest temperatures of -3 to 0 degrees, with frost developing again in light to moderate northerly breezes.

According to Met Eireann, Friday will see a largely dry and bright start to the day but cloud will push in from the north through the day along with a few light showers. Highest temperatures of 6 to 9 degrees in light to moderate northerly breezes. Dry overnight with a mix of cloud and clear spells. Lowest temperatures of -2 to +2 degrees with light northerly breezes backing westerly.

The latest Met Eireann weather forecast for the weekend says that there will be sunny spells and showers on Saturday with highest temperatures of 8 to 10 degrees. Some uncertainty for Sunday with the possibility of widespread rain.

In its latest weather forecast for Ireland, Met Eireann adds that the weather will turning milder for early next week but continuing unsettled with rain and showers.