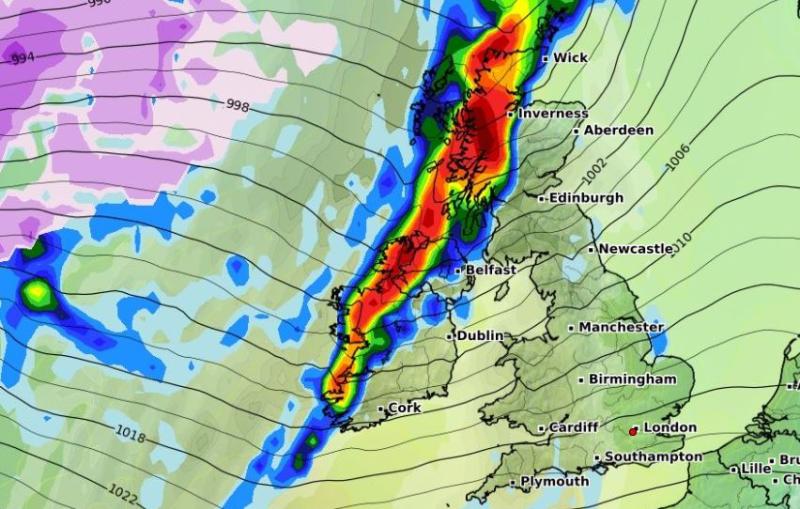 The spell of stormy weather Ireland has been experiencing is set to continue into the coming week according to the Met Eireann weather forecast for the coming week.

Storm Franklin is set to continue affect Ireland through Sunday night and into Monday with the weather set to turn much colder on Wednesday.

WATCH LIVE: Track the path of Storm Franklin as it crosses Ireland with dangerous conditions forecast

According to the latest Met Eireann weather forecast for Ireland, Monday morning will be very windy with strong to gale force northwesterly winds but winds will ease and become westerly through the day. There will be a good deal of dry and bright weather in the morning and afternoon, as scattered showers in the north and east gradually die out. However, outbreaks of rain and drizzle will move into western areas during the evening. Highest temperatures of 9 to 11 degrees.

Monday night will be a mostly cloudy night with patchy rain and drizzle spreading from the west. A band of heavier and more persistent rain will spread from the Atlantic towards morning. Turning windy again overnight as southwest winds increase fresh to strong. A generally mild night with lowest temperatures of 4 to 8 degrees occurring in the morning.

According to the latest Met Eireann weather forecast for Ireland, there will be a wet start to Tuesday but rain will quickly clear eastwards, followed by sunny spells and scattered showers, with the chance of sleet on high ground in the northwest. Breezy with moderate to fresh and gusty westerly winds. Highest temperatures of 6 to 10 degrees.

Becoming dry with clear spells for most on Tuesday night, though showers will continue in Atlantic coastal counties. Lowest temperatures of 2 to 6 degrees in moderate southwest winds.

According to the latest Met Eireann weather forecast for Ireland, it will turn cloudy again on Wednesday with scattered showers to start. More persistent rain will spread from the Atlantic through the afternoon and evening. Another blustery day with fresh to strong and gusty southwest winds. Highest temperatures of 8 to 11 degrees.

It will turn much colder early on Wednesday night as rain clears to the east. Showers will follow behind, falling as sleet in places with the chance of snow on higher ground. Lowest temperatures of -2 to +1 degrees, with frost and icy stretches developing.

According to the latest Met Eireann weather forecast for Ireland, Thursday will be a chilly day with sunny spells and scattered showers, some falling as hail and sleet. Highest temperatures of 4 to 7 degrees in fresh and gusty westerly winds.

After Thursday, it will remain generally unsettled with showers or longer spells of rain and blustery conditions at times.